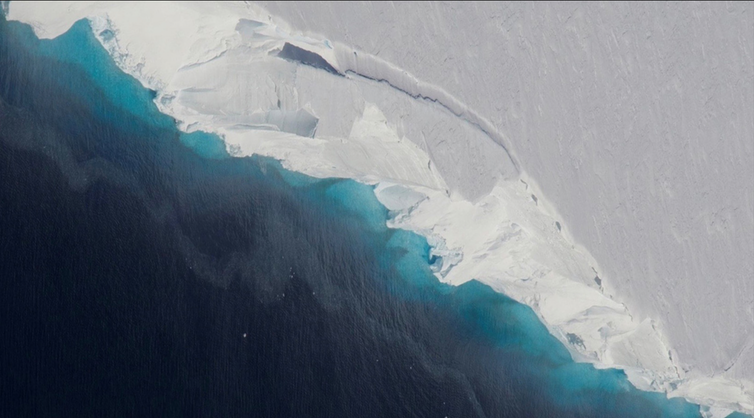 Scientists are concerned about the stability of Antarctica’s Thwaites Glacier, which holds back large amounts of land ice. Image courtesy of NASA.

A massive Antarctic glacier is less stable and could potentially cause more and more rapid sea level rise than previously predicted, a study published Monday in Nature Geoscience finds. The Thwaites Glacier, known as the “doomsday glacier” because it holds enough water to raise global sea levels by multiple feet, is especially susceptible to rising ocean temperatures caused by climate change because it rests on the seabed and can thus be melted from underneath. After conducting an extensive mapping of the ocean floor, researchers found that at some point in the last 200 years, the base of the glacier dislodged from the seabed and retreated at double its recent rate of retreat.

If Thwaites underwent another such rapid retreat, the results could be “existential,” University of South Florida marine geologist Alastair Graham, a co-author of the study, told the Washington Post.

The specter of the rapid disintegration of the Thwaites Glacier comes as Greenland — which lost enough ice in one weekend this summer to put West Virginia under a foot of water — recorded its largest September ice melt on record. “This [September] event demonstrates how global warming does not only increase the intensity but also the length of the melting season,” Maurice van Tiggelen, a polar scientist from Utrecht University in the Netherlands, told the Washington Post.

Appreciate CleanTechnica’s originality and cleantech news coverage? Consider becoming a CleanTechnica Member, Supporter, Technician, or Ambassador — or a patron on Patreon. Don't want to miss a cleantech story? Sign up for daily news updates from CleanTechnica on email. Or follow us on Google News! Have a tip for CleanTechnica, want to advertise, or want to suggest a guest for our CleanTech Talk podcast? Contact us here.
In this article:Antarctic glaciers, Antarctic Ice Sheet, Antarctic melt, Global Weirding, Greenland, sea level rise, Thwaites Glacier An island that once covered 35 square miles has less than 1 square mile remaining. The island’s population, mostly French-speaking American Indians and their...