Most of our small-scale lithium battery reviews at CleanTechnica involve power stations or solar generators. They come as complete assembled kits that include not only battery storage, but also have built-in inverters, plugs of various kinds, and a solar charge controller. Those are super handy for people who don’t know the ins and outs of low voltage electrical systems, and they’re also handy for tinkerers like me when I don’t feel like tinkering.

Anyone involved in RVing, amateur radio, and other low voltage systems knows that portable power stations and solar generators aren’t the best answer for every situation. For RVs, there’s already a complete electrical wiring system that feeds 11-15 volt power to everything from lighting to water pumps, to inverters. For amateur radio operators, power stations generally only allow for 10 amps of 12-volt power output, and that’s only enough power for low-power “QRP” operations. Many other applications, like solar-powered automatic gate openers and trolling motors, also need a battery with more 12-volt output.

Basically everything I described above is dominated today by lead-acid batteries, usually larger “deep cycle” batteries. But, you generally still want to keep those batteries above 50% to make the battery last longer, which generally cuts your usable battery capacity in half. Ouch!

If you want to replace these RV-type batteries with lithium batteries and double your usable capacity, you can’t just buy a bunch of 18650 lithium cells and solder them together to give 12 volts and enough storage for the application. You’ll also need to include some kind of battery management system and enclose your battery pile to keep things safe and tidy. All of this is possible, but it’s a big time-consuming hassle. Worse, building your own 12-volt battery pack can be rather dangerous (fire is the biggest risk) if you don’t know what you’re doing.

Fortunately, Lion Power has a good solution to this. Instead of buying battery cells and making your own battery pack, the company offers a complete solution with cells, battery management, and an enclosure, all about the same size as a typical deep cycle RV battery. Lion Power offers various sizes, but we reviewed some of its UT 1300 models. You can read on to get all of the details, but in a nutshell, you can almost always just replace deep cycle batteries with these batteries by just wiring them in.

Before we get to our good experiences with these batteries, I want to share a bit about them first so readers can decide if they’re a good fit for their own needs. The batteries can connect to an existing or new electrical system in two ways. If you have something that clamps onto posts, you can use the included posts to do the same with these batteries. If you have a battery system that needs to attach wiring with a screw, you can twist the included posts and they come off, revealing a threaded hole you can use included wingnuts to attach wiring with. So, you’re covered either way with the UT 1300.

The batteries have carrying handles that fold down completely flat. At 23 pounds, they’re not exactly light, but with the handles, they’re pretty easy to move and place for most people. When you’re done using the handles, they fold up completely flush with the top of the battery, so they won’t get in the way of any installation the battery enclosure itself can fit inside of.

Another cool thing on top is a battery capacity meter. By pushing a button, you can see what the battery’s state of charge is. That makes life a lot easier when using chargers or other things that don’t give you that information.

Here’s a video showing off all of these features and discussing the other advantages to the system:

I worked with several family members to test several of these batteries for different things (and in the coming months, we’ll do some even cooler testing).

One of my brothers tested the battery with several different things people usually use deep cycles for. He used a trolling motor, and that worked not only flawlessly, but worked for a lot longer than a trolling motor usually pushes a boat around for with lead-acid batteries. In the coming months, we’re hoping to do more testing with a stronger electric outboard motor. 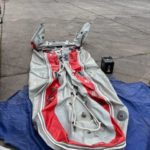 He also used the battery to run the inflator for one of his inflatable boats, a power inverter, and several other devices that run on 12 volts. None of them was too much for the battery (and he tried to draw a bunch of power). Basically, after our testing, I wouldn’t hesitate to put this battery to the job of any deep cycle battery.

The only thing that might be a minor issue is that some battery chargers won’t give the battery enough voltage for a full charge. Refer to the documentation for both the battery and the charger to get the Lion Power batteries up to 100%. In the case of solar power, in some cases you may need to buy a solar charge controller with a “lithium” setting, or adjustable voltage.

My dad ended up putting two of the batteries through some more serious testing in an RV. His camper already had two failing deep cycle batteries, but once he installed the Lion Power batteries, it ran far better and longer than the camper did even with new lead-acid deep cycles. Initially, he only ran one battery. With lead-acids, he’s generally pretty careful to avoid running lights, water pump, and other things too much for fear of losing power partway through the night. But, with just one battery connected, he was basically careless with electric usage and woke up in the morning to a battery that still read 100% on the RV’s power meter. He estimates that with normal RV battery use, one battery would have taken care of things for four days without a charge, and two batteries would run for a week.

Add solar, and it’s not hard to boondock indefinitely even with intermittent sun.

The next thing we’re going to do is use four of the batteries together to power an efficient RV air conditioner on solar power. Keep checking back to see how that and other testing goes.

Appreciate CleanTechnica’s originality and cleantech news coverage? Consider becoming a CleanTechnica Member, Supporter, Technician, or Ambassador — or a patron on Patreon. Don't want to miss a cleantech story? Sign up for daily news updates from CleanTechnica on email. Or follow us on Google News! Have a tip for CleanTechnica, want to advertise, or want to suggest a guest for our CleanTech Talk podcast? Contact us here.
In this article:Lion Power