Most power stations and solar generators we review are pretty big. The largest ones are something you can’t really carry more than a few feet, but which give massive amounts of power. In one case, I was able to run a small electric toaster oven to bake potatoes for over an hour. At the smallest, power stations I’ve tested before now could run a CPAP or nebulizer machine and charge some mobile devices. But even those tend to be fairly bulky and don’t fit well in a backpack along with other things.

Recently, Gooloo sent me their GTX 280 portable power station (there’s a $120 discount code at that link for the next few days). Unlike others I’ve tested, this one focuses on being compact above just about everything else, while still providing a useful amount of battery storage. Despite being the smallest power station I’ve tested, it still has 280 watt-hours of storage, which is enough to do quite a bit with. The station comes with several accessories and cables. Most importantly, it comes with a separate inverter for 110-volt US-style house power. This separate unit helps keep the unit compact. It also comes with two USB cables and a set of jumper cables that the unit can use to start a car.

The attachment of the inverter is pretty simple. You just plug it into the cigarette-lighter style 12-volt plug on the side of the unit, and then plug something into it. The separate inverter also has two USB ports, including a 30-watt USB-C connection. In a car, you can use the inverter to charge the battery pack portion of the unit. When you don’t need to plug something into the inverter, there are still plenty of options for power. The main battery unit has a 100-watt USB-C PD plug that is bidirectional. This allows you to charge the unit with a typical laptop charger, or use it to charge that same laptop. It also has a 12-volt plug, and a connector for the jumper cables. Finally, there’s the cigarette lighter plug the inverter plugs into, but you can just use it directly, too. I tested the USB-C port, and it works well. It not only powered my laptop, but still had plenty of output power left for other things.

For this review, I did my usual amateur radio test to see if it had spurious emissions or other issues, and this also gives me an opportunity to test multiple power outputs at once. As with other promised features, this works well, too. It kept my laptop up at 100% while providing plenty of power for my QRP amateur radio. I played around a bit on the HF bands (connected to a big, long antenna in my yard) and I managed to get a signal out as far as Hawaii and all around North America. While I’ve done better in the past (I didn’t get into Europe or Asia this time), that’s more of a function of space weather than power.

In other words, the power station did great. It provided plenty of power for the computer, my digital interface, my radio (both receive and transmit), and the charger for the radio’s internal battery pack. There was no weird noise on the air or other problems with this power unit. One thing I noticed was that the unit provided 15 volts instead of 12 or 13. That’s fine for just about anything designed to run on 12 volts, and in some cases a little better. But, if you do have any of the rare devices that can’t handle 15 volts, be sure to not plug it into this unit. Once again, this is pretty rare, but if you’re concerned, check with the manufacturer of any 12-volt device you’re worried this could be too much for. 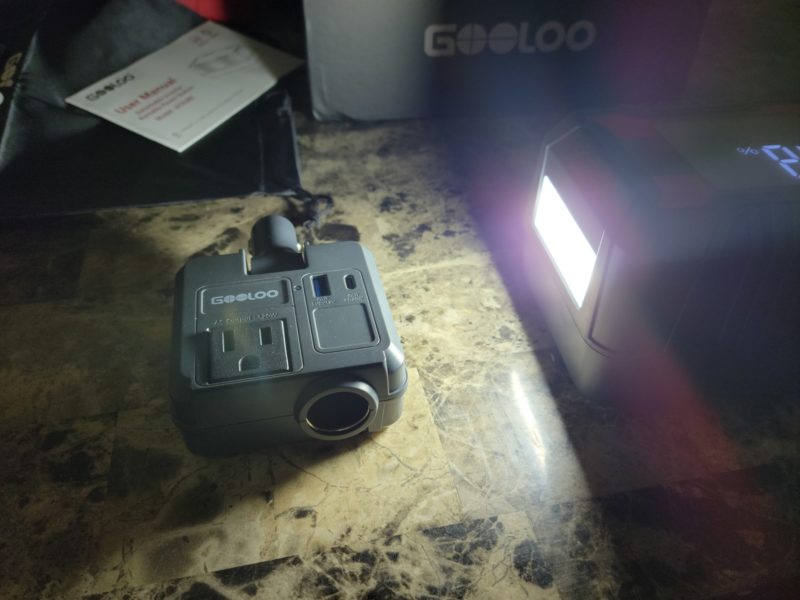 If you’re going to use this device for emergencies, it has one other cool feature: a built-in lantern. The light comes from a small diffused area on the opposite side of the unit from the plugs. To turn it on, give the power button a long press. Subsequent presses put it into flasher and SOS modes if needed.

The light was a lot brighter than I expected, and didn’t seem to use much power from the battery pack. You’ll probably want another light of some kind for emergencies (like the biolite lights I recently reviewed), but if this was all you had, it would work well.

One Problem I Ran Into

When it comes to power output on the 110-volt inverter, it’s got a strict limit of 120 watts. That puts it behind more bulky power stations like the Jackery 300 I’ve tested, so if you need more power, definitely go with a larger power station with a bigger built-in inverter. But, even for things that don’t pull much power, sometimes it won’t work.

When I tested the unit with a larger fan I have in my house, it wouldn’t start the fan. Plugging it into the larger Jackery units I have, it started up no problem, and the fan only pulls about 60 watts. The problem with trying to run this on the GTX 280 is that the initial jolt of energy it takes to get the fan turning exceeds the 120 watt limit briefly, and then settles down to 60 watts. So, devices with an electric motor will sometimes give this unit problems.

I also tested it with a nebulizer, which pulls about 80 watts. That device had no problem starting at all, so it could power most nebulizers, CPAP machines, and other medical devices that are under the 120-watt limit. Just don’t expect to run bigger electric motors, like in a fan.

This power station is going to end up riding in my emergency bag, or “bug out bag.” It’s small and light enough that it can give me portable power options without having to add a bunch of bulk and weight to the bag. This leaves room for important things like a solar panel, food, water, and communications equipment that I have in the bag.

The only thing I’d like to see is compatibility with more solar panels, the way Jackery units come. The only way to charge this unit is via USB-C PD, so if you want to turn this power station into a small solar generator, you’ll need to find a solar panel kit that can output to USB-C PD to charge this up. This is probably not included because a solar charge controller would take up more room, and this device needed to be small, so that’s probably not a bad thing if you plan ahead.

Appreciate CleanTechnica’s originality and cleantech news coverage? Consider becoming a CleanTechnica Member, Supporter, Technician, or Ambassador — or a patron on Patreon. Don't want to miss a cleantech story? Sign up for daily news updates from CleanTechnica on email. Or follow us on Google News! Have a tip for CleanTechnica, want to advertise, or want to suggest a guest for our CleanTech Talk podcast? Contact us here.
In this article:Gooloo, portable power stations In recent years there has been a huge rise in the demand and types of portable battery storage systems available to consumers. This has...