Most portable power stations can store power, have a handle to lug them around with, and have a variety of options for charging and discharging. We have seen them all around here and after reviewing dozens of different power stations, the Vanpowers Super Power Pro 2000 managed to raise the bar in just about every way. It’s packing six AC power ports, a load of USB power ports up front, a beautiful display, with the front of the device looking super clean and retro in a cool green paint job. Turning the unit on lights up a crisp display, packed with information and relevant graphics in an easy to read format. It’s bright enough to read in the sunlight without being overpowering in a dark room. Disclaimer: The Vanpowers Super Power Pro 2000 was provided free of charge for the purposes of this review

The screen shows how fast the power is coming in, being pulled out, the current state of charge, if the AC and DC circuits are energized, and lets you know if its connected to wifi. That’s right. The Super Power Pro 2000, in addition to having a name that sounds like it’s right out of a science fiction movie, has wifi, GPS, a SIM card, and a smartphone app. I was initially skeptical but found the app to have some neat features that actually add value. It lets you turn the entire unit on and off as well as individual control over the power of the AC and DC circuits.

You can view the state of charge and even set a charging maximum to extend the life of the onboard 2kWh battery. Right up front of the unit itself is a light bar that’s reminiscent of the current trend in electric vehicles. The control for that light bar is in the app. You can change the color and brightness and the light comes on anytime the unit is powered on. It’s not a game changer by any means, but it’s nice to have and makes it easy to see at a glance if the unit is on or not. If I had a choice between having tons of features and a unit that’s minimally equipped and doesn’t have light bars, wifi, and an app, I’m going to take the extra features any day of the week. The rear of the unit features ribbed slides and robust wheels while the side hosts 6 AC outlets and a covered 12v outlet. Image credit: Kyle Field, CleanTechnica

About that app, the Vanpowers app is a little bit glitchy to get connected (we had issues getting the wifi to connect) but as soon as I was able to get it connected to the unit, the app opened up a world of new control over the power station. It provides full control of just about every function of the unit and many functions that you can’t access from the unit itself.

From the app, you’re able to turn the main unit on and off, turn the AC and DC sides of the power output on and off independently, and monitor all of the power flows much like you are able to on the main display of the unit. It’s a pretty neat set of functionality that I would not have thought to ask for explicitly, but having seen it and used it with the Vanpowers Super Power Pro 2000, I can definitely see the utility of having full remote control of a power station.

When I started using the power station, it was handy to be able to pull up the app to see how fast it was charging from AC, from solar, or discharging via the DC and AC circuits. More than just looking at numbers, it was nice to have the ability to simply flip on the app and turn off the AC or DC circuits versus having to walk up to the unit. Granted it’s not the largest of inconveniences, but it does open up some new possibilities for use cases that wouldn’t otherwise exist. The Vanpowers Super Power Pro 2000 is a 2,096 watt-hour unit, or just around two kilowatt-hours of storage capacity. It packs that into a unit that’s more compact than many power stations with far less capacity and at only 46.5 lb for an NMC chemistry lithium-ion battery. To make it easier to move around, the unit features an integrated carrying handle and a set of wheels with a luggage-style extending handle that makes it easy to move around without having to actually lift it. The double handle up top does look a little funny, but it makes sense the more you use it.

To see how this thing performed in real world scenarios, I set it up on the table and plugged in our trustee 800W water kettle. With a 2,000 watt continuous output capacity, the Vanpowers power station shrugged off the kettle’s load like it was no big deal. On paper, it can easily power two of these units simultaneously and still have some extra capacity to keep all your devices charging. To push it harder, I plugged in my Kitchen Aid Professional 5 Plus mixer and cranked it all the way up to level 10. This only pulled 500 watts, pushing the unit just over half its rated output. I added a few USB devices and wasn’t surprised that the unit hardly blinked. It merely updated the duration of time it would be able to sustain the higher load with each additional device added. Power tools were also no match for the Super Power Pro 2000. I plugged in my Bosch Colt router and a Porter Cable circular saw and the station was easily able to support both of these running.

When it came time to recharge the power station, plugging it into a normal wall outlet is easy, with a single cable that plugs into a standard wall outlet. Vanpowers streamlined the electronics for the charging system and that makes it more user friendly in real world use cases. Plugged into a normal wall outlet, the unit can recharge at 1,800 watts to bring it up to 80% in about an hour. We found this estimate to be accurate in our two full discharge – recharge cycles and were impressed at the ability to control maximum state of charge through the app to maximize the life of the battery. The unit can recharge at up to 1,800 watts from solar as well and comes with an adapter that allows panels with MC4 connectors to plug in directly. Of course, 1,800 watts of portable solar is a lot, so that’s more useful when using this power station as the storage and inverter portion of an off-grid setup rather than a portable solution. It can charge slower with less solar connected and Vanpowers sent along their 200 watt folding solar panel for us to test. It boasts an impressive 23% efficiency which translates to less surface area, a smaller, lighter panel to get 200 watts of solar production. We plugged it in for a day and were impressed at how light it was and how easy its flat square form factor was to move around. Solar is especially picky when it comes to the angle of the sun, but we were still able to add just over 1,000 watt-hours of capacity to the station with the panel in 8 hours of full sun charging here in California. The panel retails for $458 from Vanpowers which feels steep, though it likely can be found on sale if you shop around.

The primary use cases for portable power stations today is as a home backup power supply for and for providing power in remote situations like RVs, camping, small off-grid applications and the like. We are increasingly seeing portable power station companies stepping into a slightly more professional setting with kits that actually install into vehicles. Vanpowers is hinting at a similar option “coming soon” in the future with mention of a “Power Station” at approximately twice the size of the Super Power Pro 2000. 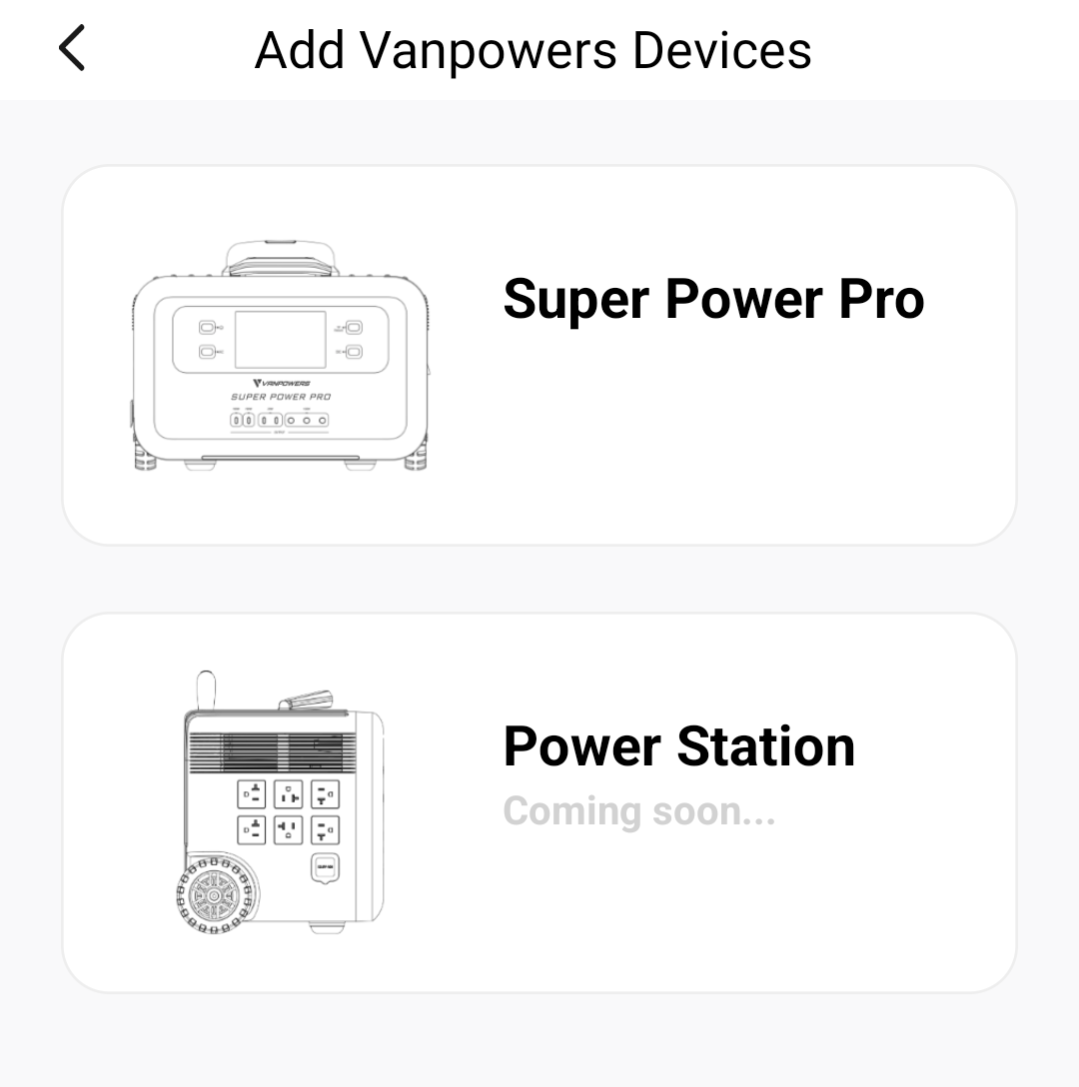 There’s also a significant opportunity to apply these types of devices in a construction environment. It’s not hard to imagine a contractor adding a battery pack to their truck and connecting it to a stationary solar panel on top of the cab, for instance, to keep it charged up. This setup enables contractors to capture free power from the sun to power their work, enabling them to work wherever they want without the need for a temporary power run to the local utility or high maintenance generators.

With a 2,000 watt rated continuous output and 4,000 w peak output rating, the Vanpowers Super Power Pro 2000 is an absolute workhorse of a unit and could be foundational to any one of the applications named above. The ability to set a maximum charge rate in the app allows owners to extend the life of their unit by charging only to a max of 80% or 90%, much like we do with our electric vehicles today. Charging inputs are kept safe under a door on the side of the unit. Image credit: Kyle Field, CleanTechnica

Unfortunately, the NMC chemistry does tend to deteriorate faster than other more stable chemistries like LFP. Vanpowers expects these batteries to hold at least a 60% charge after 3,000 cycles, but if cycle life is your primary concern,  Vanpowers also offers a slightly smaller unit in the Super Power Pro 1500 that utilizes the more durable LFP chemistry. This increases the cycles to 6,000 at a 60% charge.

For more information about this unit or to order one, head over to the official Vanpowers Super Power Pro 2000 website.

Appreciate CleanTechnica’s originality and cleantech news coverage? Consider becoming a CleanTechnica Member, Supporter, Technician, or Ambassador — or a patron on Patreon. Don't want to miss a cleantech story? Sign up for daily news updates from CleanTechnica on email. Or follow us on Google News! Have a tip for CleanTechnica, want to advertise, or want to suggest a guest for our CleanTech Talk podcast? Contact us here.
In this article:Portable Power Station, Vanpowers, Vanpowers Super Power Pro 2000 Oupes, a company I haven’t worked with before, recently got in touch with me and sent me their 1800W power station to review. It’s... Oukitel recently sent me a power station (aka “solar generator” if you add a solar panel) to review. I’ve seen a lot of power...