Any story about cleantech adoption is uplifting, but schools going solar are hard to top. The latest solar school story is a school district up in Central Pennsylvania, Central Columbia School District, going solar in a big way. In February 2022, the school board approved plans for 3.764 megawatts (MW) of solar power. Aside from rooftop solar power systems on the high school, this also includes ground solar power arrays in between the high school, middle school, and elementary school. For more, here’s a guest post from William H. Fitch III about the school district solarizing:

Laying between east/west mountain ranges is the Central Columbia School District (CCSD) in Central PA. Almost exactly halfway between the towns of Bloomsburg and Berwick, the school district “pulls” students from both locations. Back in February 2022, the school board approved close to 2 megawatts of PV panel arrays for the school district. The arrays are located on the school district building, part of the high school roof, but mostly as ground arrays between the high school, middle school and elementary school. The ground arrays will be particularly beneficial for the school’s educational environment allowing students to walk right up to the arrays and “touch and feel” them as opposed to looking at them 100 feet or more away on a roof top. All the arrays are comprised of VSUN 545 watt half-cell panels. The panels are bifacial and come with a 30 year linear power warranty. Today’s panels are easily capable of generating power for over 50 years. But the temptation decades out despite continued function will be to upgrade to higher output panels on the same infrastructure. In short, 2 megawatts will become 3 or 4 megawatts. CPS 1000 VDC and 1500 VDC string inverters manage the arrays outputs. State-of-the-art programming interfaces and software will be used to monitor and manage the electricity production. A power service agreement was entered into between Central Columbia SD, Solar Partners LLC, and the Central Columbia School District. Minimum power outputs over the life of the system and an array of other legal requirements are part of the agreement.

At the school board meeting in February that provided final approval for the solar arrays, the questions from the community were mostly positive or neutral inquiry, as opposed to any NIMBY antics which have accompanied other solar array proposals in the area. I think the feeling is, it’s a school district “property” already allocated as non-residential and few residential dwellings if any have any visual rendering of the arrays. So, “not in my backyard” was no problem. The panel crew has been putting up panels for about two weeks. The racking posts were slammed in with machines, as shown in photos above and below. Another crew will come in to do the final wiring and hookups shortly. In the photos below, you can see some of the string inverters located throughout the array fields and the district building’s wall. The main utility interface location is shown below with some of the infrastructure piping in place. The array field itself is pretty impressive for a small school district in central PA. 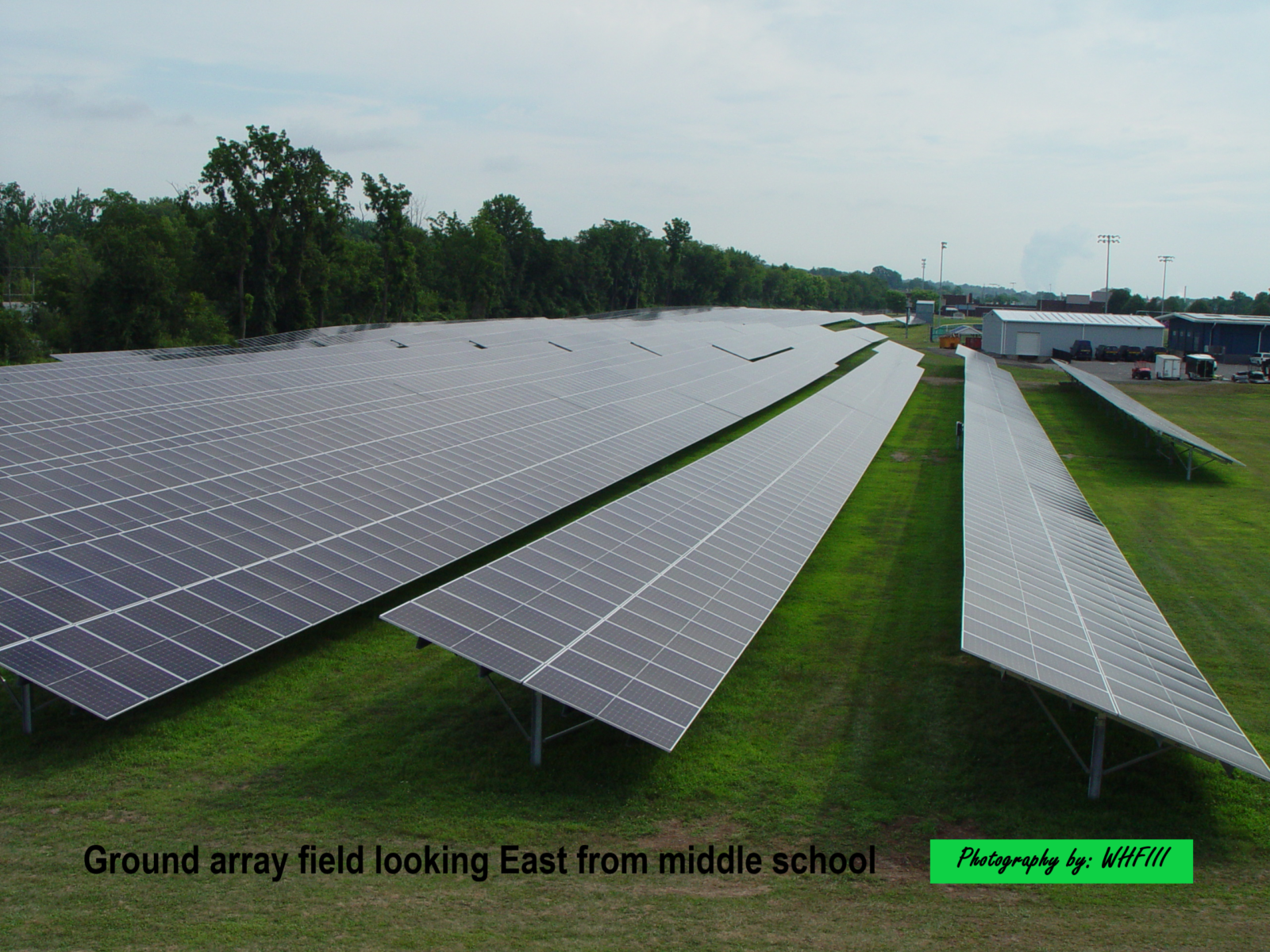 The array field itself is pretty impressive for a small school district in central PA. Image courtesy of William H Fitch III. When you add the main array field to the panels on the district office roof, the panels on the high school roof, and the small array right behind the high school corner, Central Columbia is betting “big time” on the payback and positive environmental impacts of solar PV. A panel total of nearly 7,000 puts the arm and back muscles to work for the panel mounting crews, each panel weighing in at 32.5 kg (71 lb). If I were doing that, I would go through at least one bottle of Ibuprofen!

Woodland Hills became the first school district in Pennsylvania in 2020 to pass climate friendly legislation. It has won green building awards for taking such a direction. Pennsylvania K-12 schools doubled solar generation by the end of the year 2020. Room to grow still exists, with about 2% of Pennsylvania schools using solar PV. Crude math will tell you that if only 2% are yielding approximately 30 megawatts of capacity, 100% would yield around 1500 megawatts (1.5 gigawatts) for all schools. Now, not all schools can have solar, due to various location and engineering reasons. However, the potential generation capacity across the state is really just beginning to be tapped for K-12.

From a balanced and broader reporting perspective, a report from the PennEnvironment Research & Policy Center shows Pennsylvania lags behind at #35 in the USA when comparing clean energy development overall. There are variances from category to category, but it is clear Pennsylvania historically has had its political sites and policies set by the natural gas lobby and the Marcellus Shale pot of gold. I am not throwing daggers here. It is just simple political voting record fact. Many, many green initiative bills have sat in committee only to die from cycle to cycle due to lack of movement. They get resubmitted after elections, only to wind up decaying in the same dead spot. And like it or not, our political actions or inactions set the realities that we must face every day in every way. Needless to say, Pennsylvania has a great deal of “catching up” to do with the rest of the country, and it is nice to see K-12 school districts stepping up to the challenge for a clean energy world. A great webpage to monitor legislative movements around the country is LegiScan.com. You can access it for free and set up parameters for your state and can monitor a specific bill’s progress and more.

Fixed solar array fields are one of the easiest and lowest maintenance ways to create grid electricity from the sun. No moving parts, no pollution, no energy cost, and almost no O&M. In this day and age, it is truly a YES given the state of the art, existing best practices, and solar incentives. We should get out of the way and let schools pursue very aggressive PV adoption agendas, for everyone’s benefit. WeAreSolar.com is a multi-decade company in solar and renewable energy consulting and distribution, as well as some direct installations. He is a current ASES member and has various other renewable energy affiliations. He has been “into” solar and renewable energy since the 1970s in the solar thermal area — everything from solar cookers to super-insulated houses to hot air and liquid thermal systems, flat plates, and evacuated tubes. William’s own residence generates around 20 megawatt-hours a year of PV electricity, and it also includes geothermal and solar thermal systems. He and his wife drive all-electric cars and use all-electric yard tools. No gasoline.

Appreciate CleanTechnica’s originality and cleantech news coverage? Consider becoming a CleanTechnica Member, Supporter, Technician, or Ambassador — or a patron on Patreon. Don't want to miss a cleantech story? Sign up for daily news updates from CleanTechnica on email. Or follow us on Google News! Have a tip for CleanTechnica, want to advertise, or want to suggest a guest for our CleanTech Talk podcast? Contact us here.
In this article:bi-facial solar panels, Pennsylvania, solar schools