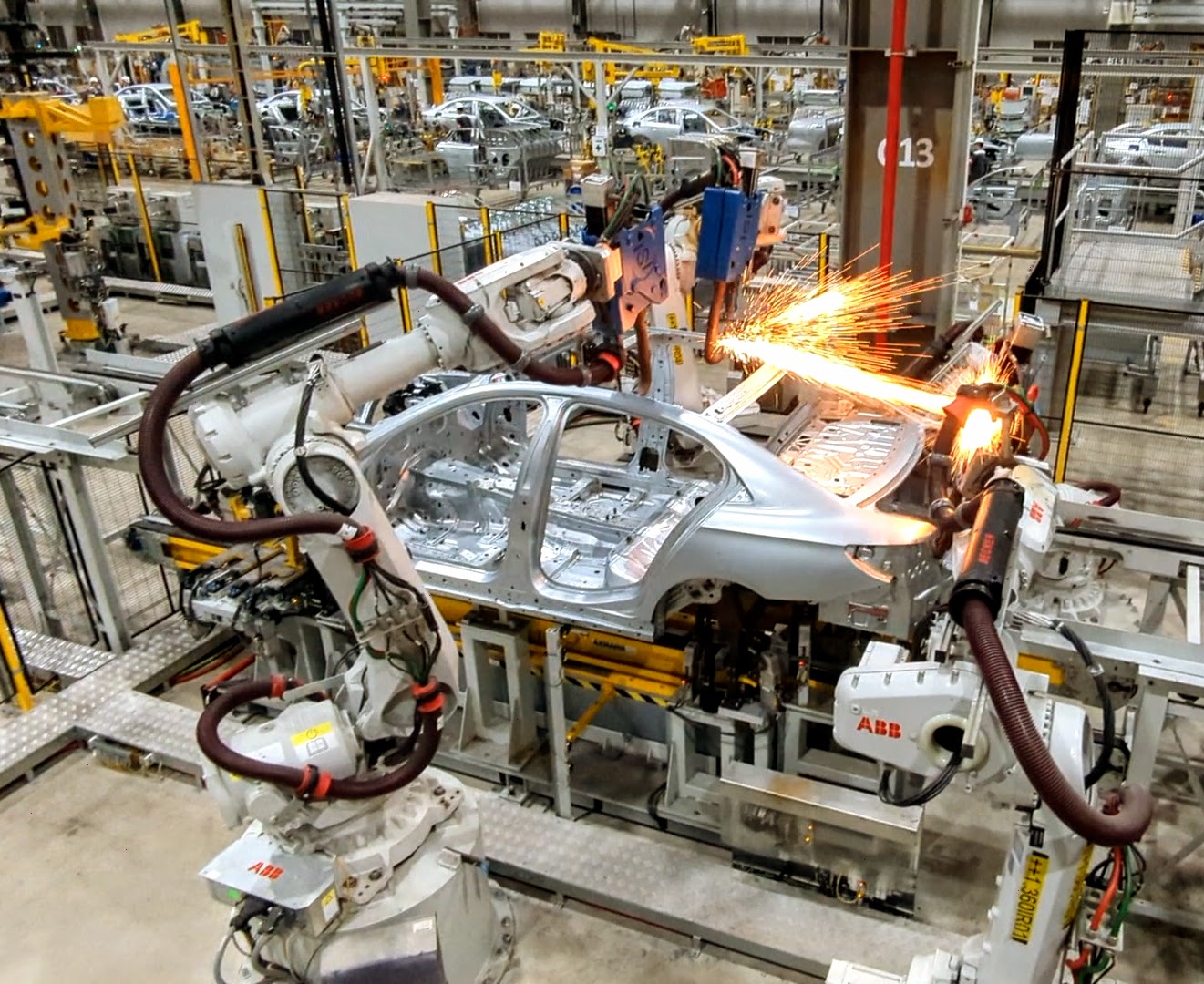 Arriving at the VinFast factory in Hai Phong, the first thing you notice is the massive scale of the property. Calling it a factory is a bit of an understatement. It’s much more like a small city with city block sized factory buildings. Built on a 900 acre property, the factory can produce up to 250,000 vehicles per year today and VinFast is working to scale that up even further. Disclaimer: VinFast paid for travel and accommodations for the author to attend this event.

Automotive production at VinFast’s Hai Phong, Vietnam, factory starts at the expansive Press Shop. Here, rolls of raw aluminum and steel are cut into blanks, then pressed with a series of dies into body panels for VinFast’s vehicles. Today, VinFast makes internal combustion vehicles, with a clear trajectory towards the fully electric future that has them halting the production of all internal combustion-fired vehicles on August 31st, 2022. They currently offer three full electric vehicles, starting with the e34, which we saw roaming around the streets of Hanoi.

The primary operating area of the Press Shop was up on the second level, where a massive Schuler press lived. These oversized machines operate essentially autonomously, seamlessly shuttling in-process components through the production process. Sets of dies operate like cookie cutters, with the upper and lower pieces of the dies being pressed down onto a piece of sheet metal to press it into the desired shape. Check out the video above for a quick look at the Schuler press in action. The orange arms you see dancing in and out of the process use suction cups to grab onto the metal components, moving them from one press section to the next. It’s a delicate dance, with little room for error along the way.

The pairs of dies stamp out doors, hoods, trunk lids, and more and can be swapped out to produce different parts of the vehicle. The dies used in the Press Shop weigh tens of tons each, requiring overhead cranes to move them in and out when the machines are refitted for a new product. Rows and rows of dies used to produce different panels are stored on the first floor of the Press Shop, lined up like terra cotta soldiers waiting to be called into action. Completed body panels shoot out the discharge of the Schuler Press and are quickly stored away in bins for transport to the Body Shop. Image credit: Kyle Field, CleanTechnica

After being stamped out, rows of workers visually inspected the panels before storing them in waiting racks. Every so often, one of the panels was pulled out of the mix for a more detailed inspection on a stand specific for each component. The operation was massive, but seemed to require very few people, with maybe a dozen people manning the entire Press Shop operation during our visit. Rows of identically pressed out body panels wait in a storage rack for storage or assembly in the Body Shop. Image credit: Kyle Field, CleanTechnica

From the Press Shop, the body panels were ferried over to the Body Shop where armies of ABB robots equipped with spot welders, suction cups, and more, supported by a host of VinFast workers, welded panels together into a body-in-white one weld at a time. On average, vehicle bodies require upwards of 6,000 welds, making the Body Shop the manufacturing equivalent of the 4th of July, with sparks regularly shooting out in every direction.

The scale of the Body Shop was hard to capture in any single image, so here’s a video captured from our initial drive through the factory to provide a sense of scale:

Each flash of sparks translates to one of the thousands of spot welds needed to put the body of the car together. Some of the welds were quick and uneventful, with others shooting off a pop of sparks 20 feet into the air. VinFast’s Body Shop utilizes a very similar process to what we saw at Tesla’s Body Shop in Fremont, California, when we toured it in 2019. As the process moves along, what was a pile of sheet metal just a few minutes earlier emerges as a fully assembled vehicle body, raw sheet metal glinting in the light of the factory. You have to love watching the sparks fly. Image credit: Kyle Field, CleanTechnica

VinFast’s Body Shop is highly automated, with ABB robots moving the in-process vehicle body parts into position, welding them a few dozen times at each station, then moving them along to the next step in the process. Tesla’s Fremont, California, factory was dark and dismal compared to VinFast’s bright and spacious Body Shop — though, that was 3 years ago and Tesla has since integrated castings into its vehicle bodies.

After the Body Shop, the body-in-whites run through the Paint Shop. We did not get to tour VinFast’s paint shop but we do know that it is a spray-on process. In the Paint Shop, paint is sprayed onto the metal bodies and they emerge in whatever color is required for the finished vehicle.

From there, the real magic of automotive manufacturing happens. This is what most people imagine when they think about automotive factories. It’s Henry Ford style production line processing, with a different part of the vehicle being bolted on at each step, with the in process vehicle bodies moving from step to step down the line. It’s very similar today, where the bodies are fitted with all of the things that make them an actual vehicle. Carpet is applied to the interior of the vehicle. Seats are bolted on, the dashboard is installed, and all of the electronics are wired up. For electric vehicles, there is one significant difference in that the electric motors and battery packs are typically installed on the lower chassis and brought together with the upper body of the vehicle in a process called marriage. I’m not here to say who’s on top in your marriage, but in automotive manufacturing, it’s always the body.

From there, the wheels are bolted on, windows installed, and doors tuned before the finished vehicle moves along the line to a quality inspection station to ensure everything functions properly and the vehicle maintains a watertight seal. While we did get to see the VinFast general assembly line, we did not see how it was operating since it was lunch time and all of the workers were on break. Such is life. The current production line is primarily producing combustion vehicles and VinFast plans to halt production of all petrol vehicles at the end of August this year. It will be a hard conversion to electric vehicles for VinFast and demonstrates their conviction in the electric vehicle space and to the future which they believe is fully electric. We’re all about zero emission vehicles of any type and couldn’t be more thrilled about VinFast’s decision to accelerate the adoption of battery electric cars and scooters in Vietnam and around the world.

The core of any electric vehicle is the battery pack, and VinFast showed us their production line dedicated to assembling them. The current Battery Factory takes pallets of externally-sourced 4,800mAh Samsung SDI 21700 battery cells and assembles them first into modules, then into packs. These packs are then fully tested before being pushed out the door, ready to install into an electric vehicle. As it stands today, the Battery Factory is only a fraction of what’s to come. VinFast is currently building its own in-house lithium-ion battery cell production facility with help from a host of production partners. Construction of the new factory in Ha Tinh, Vietnam, started in December and is on track to come online in the next 2 to 3 months, according to a company representative we spoke with. The new factory will initially have a production capacity of 100,000 packs per year with plans to ramp up to a run rate of 1,000,000 packs per year over time. Battery modules being inspected before being sealed into a finished pack. Image credit: Kyle Field, CleanTechnica

Building battery cells in-house at the new factory 190 miles away will streamline the current process and should help them drive down the cost of batteries for VinFast. It also puts control of the most critical component of electric vehicles into their wheelhouse. If successful, in-house battery production could be a key differentiator versus the competition. The earliest leaders in electric vehicles started by sourcing cells from external suppliers and inevitably either brought cell production in-house or formed joint ventures with suppliers to produce battery cells.

VinFast is a new player in the electric vehicle space, and while it’s hard to see what they’re doing from a simple press release or vehicle unveiling, seeing truly is believing. From what we saw of parent company VinGroup and at VinFast’s factory in Hai Phong on our visit, VinFast is pulling out all the stops to bring their vision of a fully electric future into being.

From the fleets of fully electric scooters (more on that in another update), to the rapid conversion to 100% electric vehicle production on the automotive side in just a few weeks, VinFast is leveraging the full VinGroup ecosystem to accelerate the transition to fully electric vehicles as quickly as humanly possible.

Disruption of entrenched industries is hard. It’s doubly so when the disruption is from a startup from a country not known for producing automobiles, but VinFast is making steady progress. They transformed this 900 acre plot in Hai Phong from a muddy lot into a factory churning out vehicles and scooters in just 21 months and are attempting a similar feat at a new factory in North Carolina in the eastern United States. It’s go time. This is where things get difficult.

Everyone we talked to at VinFast welcomed the challenge with a smile and addressed it head on with a believable certainty in their voice. Having seen what they have accomplished in Vietnam already, we will eagerly be watching and cheering for them at each step of the way. We believe the future is electric and the future is now, thanks to all the entrepreneurs, visionaries, companies, and individuals working to make their unique visions for a better future a reality. Appreciate CleanTechnica’s originality and cleantech news coverage? Consider becoming a CleanTechnica Member, Supporter, Technician, or Ambassador — or a patron on Patreon. Don't want to miss a cleantech story? Sign up for daily news updates from CleanTechnica on email. Or follow us on Google News! Have a tip for CleanTechnica, want to advertise, or want to suggest a guest for our CleanTech Talk podcast? Contact us here.
In this article:Hai Phong, Samsung SDI, Vietnam, VinFast, Vingroup