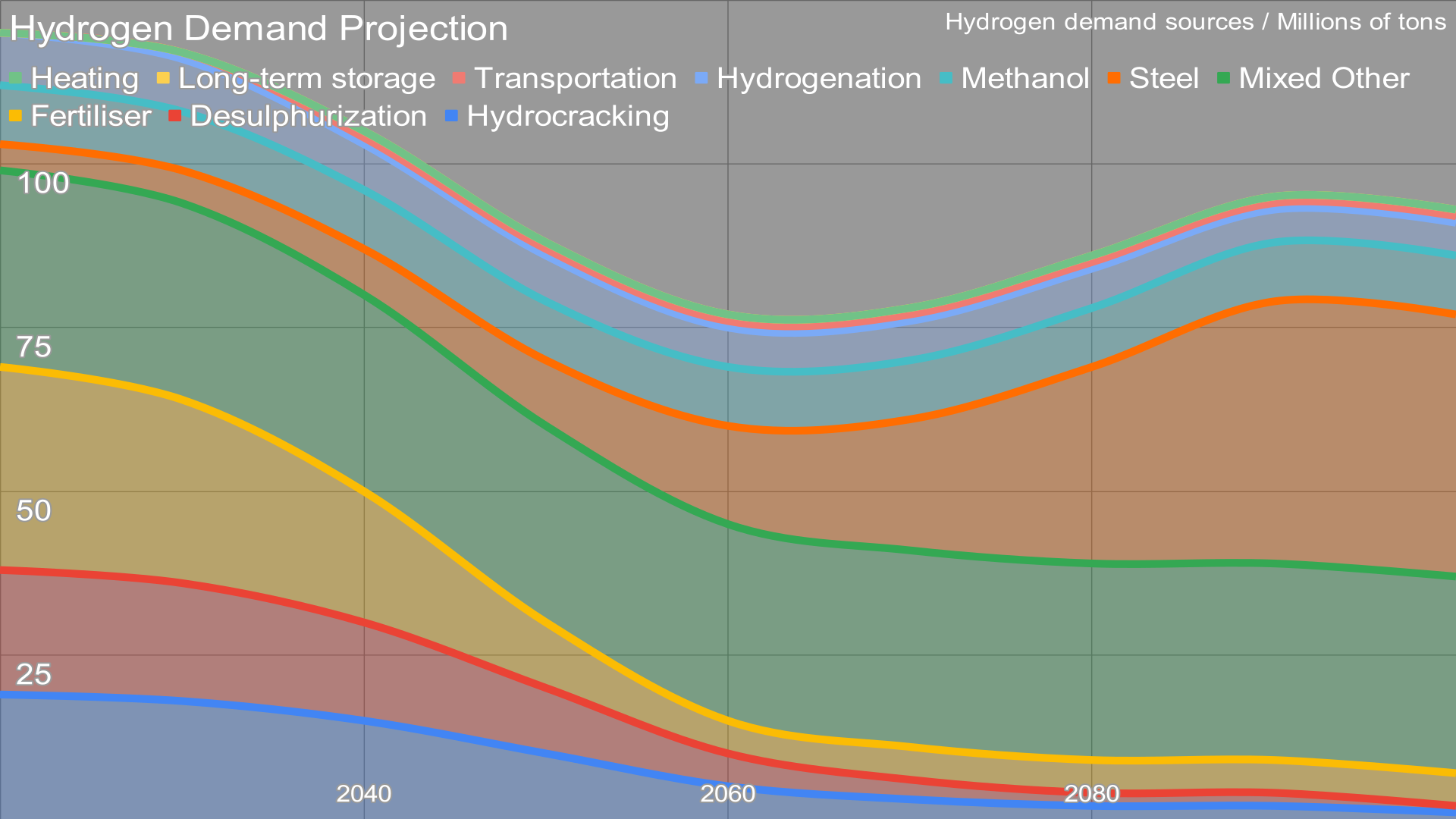 Recently a variety of studies and memes have been expressing an odd distortion of reality, supported strongly by oil and gas industry lobbying and PR groups. The claim is that gas pipelines move a lot more energy a lot more cheaply than high-voltage direct current (HVDC) transmission.

To be clear, this is actually true under specific circumstances. It just happens to be completely false in any real decarbonized world. What are those specific circumstances? Well, you need an existing pipeline between an existing concentrated natural gas reserve and an energy demand market that uses that natural gas. In other words, if the world doesn’t need to change at all, then moving molecules make great sense. Unfortunately, that doesn’t stand up to the slightest scrutiny.

The authors of the papers — Saadi et al. in 2018 and deSantis et al. in 2021 — appear to have their hearts in the right places, they just draw the system boundaries around their studies in such an arbitrary way as to lead to misleading results. Saadi et al. are likely more useful and less easy to misrepresent, but still have challenges. And those misleading results are being amplified by the same organizations who have amplified climate and solution disinformation for decades.

Let’s break down the problem.

First, I referenced system boundaries. Both studies assume a 1000-mile long energy transmission distance, and limit themselves to moving energy across that distance as a gas, liquid, or electricity. For natural gas flowing through a pipeline from a natural gas extraction operation, this is a reasonable choice. But it falls apart rapidly for hydrogen vs electricity. There are no natural reserves of hydrogen to extract unless you make it from natural gas or coal, and clearly the people who own gas reserves and the pipelines that lead from them really want to do that.

But comparing that to HVDC becomes problematic immediately. Both papers assume that there is a concentrated source of hydrogen to be put in the pipeline. However, manufacturing green hydrogen at just under $1.00 per kg that is only twice the cost of natural gas per unit of energy before the spikes of the last year requires $0.01 per kWh electricity delivered 24/7/365 to dirt cheap electrolyzers in large scale industrial hydrogen manufacturing facilities that don’t exist. In order to achieve firmed 24/7/365 electricity, the facility has to build a lot of net new wind farms and solar farms, build a lot of transmission from the renewables to the facility and build storage on top of that.

In other words, all of the HVDC required to move energy from the renewable generation sites to energy demand centers would be needed as well as the hydrogen pipelines. Cutting out the hydrogen pipeline middle man is much cheaper systemically, something that the studies miss completely.

Second, that hydrogen still won’t be cheap. While my assessment is that massive build out of renewables, transmission and storage will lead to roughly $0.02 per kWh electricity prices in 2020 dollars by 2100 or so, that’s the very end game of a fully decarbonized grid. And it’s still twice as costly per kWh as the sub-$1 per kg assessments require, making the energy 4 times as costly per unit of energy as natural gas. In the real world of the next two decades, firmed 24/7/365 electricity is going to be a lot closer to $0.10 per kWh, or ten times the $1 per kg requirement.

Third, there’s the next problem, exergy. The deSantis paper at least acknowledges it, but then dismisses it. Exergy is the amount of useful work that can be delivered by the energy carrying substance, whether it is electricity, hydrogen, or gas. Electricity has very high exergy. If you have a MWh or 3,600 megajoules or 3.4 mmbtu of electricity, then you have a MWh of ability to do work. But if you use the same units for natural gas or hydrogen, it falls apart rapidly.

The biggest use of natural gas is for electrical generation, about 40%.  The new Utah hydrogen manufacturing and storage facility will combined cycle gas generators initially with natural gas, then a mix of natural gas and hydrogen and at some mythical future date hydrogen alone. But combined cycle gas generators are about 50% efficient at turning natural gas into electricity. Hydrogen fuel cells are about 60% efficient at turning hydrogen into electricity. Those 3,600 megajoules or 3.4 mmbtu of gas, in other words, are only equal to about 0.5 to 0.6 MWh in the real world.

Fourth, it’s worth pointing out that when you manufacture green hydrogen, you throw away about 20% of the energy in the electricity. We’ll make that a bit more efficient, but it’s small and incremental steps with a likely hard cap of 86% efficiency. So we throw away high exergy electrical energy when we make green hydrogen, and we throw away 40% to 50% of the energy in hydrogen when we turn it back into high exergy electricity that we can use for something.

Finally, there’s the transmission itself. HVDC lines from wind and solar farms to demand centers have energy losses of 3.5% per 600 miles or less, while hydrogen requires three times the energy to compress and pipe as natural gas. That energy has to come from somewhere as well.

By drawing the system boundaries narrowly and ignoring exergy, the comparisons become deeply misleading, and make it appear as if putting hydrogen in pipelines is a no brainer, when it’s anything but.

And it leads to people like Lion Hirth, PhD, energy economist and otherwise sensible climate action wonk, posting misleading memes on LinkedIn, which is what led me to finally write this article. He asserted the following:

“A pipeline (say, Nord Stream 1) can carry gas worth 540 TWh per year. That’s 30x times the energy you can put through an HVDC line. Thirty.”

He has a bar chart with no referenced citation to underpinning data which shows that. The Nord Stream 1, by the way is a 4-foot diameter, 1.6-inch-wall steel pipe that runs about 1,000 miles.

The size of the HVDC line is misleading as well. It’s not a single strand HVDC, which no one would build, but it’s a small HVDC transmission line that can deliver about 18 TWh per year that was chosen for comparison, to make the pipeline energy look better. As a better comparison, the 6,400 MW HVDC link from Xiangjiaba Dam to Shanghai in China delivers 56 TWh per year with 5% losses of energy for the 1,000 miles.

Make the pipeline energy a lot smaller, and the HVDC line an actually real size, and all of a sudden that 30x drops by an order of magnitude. And that’s before you build all of the HVDC infrastructure to bring firmed electricity to the head of the pipeline and build the massive hydrogen plant to manufacture the molecules.

All of this is to say that in the future, where hydrogen is needed as a molecule — and again this is a declining market not a growth market as we eliminate most refining of oil and reduce our dependence on fossil-fuel derived fertilizer — we will manufacture hydrogen on site with firmed, high-exergy electricity that powers the rest of the industrial facility as well, not build a massive hydrogen distribution system that is also massively redundant with just moving electrons.

Appreciate CleanTechnica’s originality and cleantech news coverage? Consider becoming a CleanTechnica Member, Supporter, Technician, or Ambassador — or a patron on Patreon. Don't want to miss a cleantech story? Sign up for daily news updates from CleanTechnica on email. Or follow us on Google News! Have a tip for CleanTechnica, want to advertise, or want to suggest a guest for our CleanTech Talk podcast? Contact us here.
In this article:China, HVDC, Hydrogen