The sand battery is the idea of two Finnish engineers, Markku Ylönen and Tommi Eronen. It is simplicity itself. Make a really big pile of sand. Heat it with excess renewable electricity to around 500º C (932º F), then use that heat later to heat homes, factories, even swimming pools. They say the sand can stay hot for 3 months or more. Together they founded Polar Night Energy, which has completed its first installation — 100 tons of sand inside what looks very much like a silo — in the town of Kankaanpää.

Americans may have a hard time seeing the value in this idea. The hot sand is not very good at generating electricity, so what’s the point? But don’t let American Exceptionalism cloud your judgment. There are lots of places in the world — particularly in cold climates — where district heating is common. Instead of individual furnaces in each building, heat is generated in a central location and distributed to homes, factories, and businesses via a system of underground pipes and ducts. The first Polar Night Energy system has been installed at the Vatajankoski power plant, which runs the district heating system for the area.

The sand battery is primarily intended to supplement those district heating systems and significantly lower the amount of electricity, oil, or methane used to heat buildings. Particularly now, while the madman in the Kremlin is busy playing “mine’s bigger than yours” on the international stage, anything that reduces the need for methane and electricity sourced from Russia is welcome news indeed. Moscow halted gas and electricity supplies to Finland after the country decided to join NATO.

According to the BBC, the sand battery represents a simple, cost effective way of storing energy. It uses excess electricity from renewable energy sources to heat the sand, which can stay at around 500º C for months. “We have already learnt that our system has even more potential than we initially calculated. It’s been a positive surprise,” says Ylönen. “Whenever there’s a high surge of available green electricity, we want to be able to get it into the storage really quickly.”

The first installation has 100 kW of heating power and 8 MWh of energy capacity. “This innovation is a part of the smart and green energy transition. Heat storage can significantly help to increase intermittent renewables in the electrical grid. At the same time we can prime the waste heat to usable level to heat a city. This is a logical step towards combustion-free heat production,” he adds.

Vatajankoski uses heat recovered from local data servers as part of its district heating system. Ideally, that waste heat should be between 75 and 100 degrees C before it is fed into the district heating system. When the temperature gets too low, heat from the Polar Night facility can make up the difference. The district heating system also keeps the water in the town’s swimming pool warm all during the long Arctic winter. In terms of emissions, Polar Night says, other than the embedded emissions from constructing the sand battery, the system has the same carbon intensity as the energy source that provides the electricity to heat the sand initially.

The idea for the sand battery was first developed at a former pulp mill in the city of Tampere, with the council donating the work space and providing funding to get it off the ground. “If we have some power stations that are just working for a few hours in the wintertime, when it’s the coldest, it’s going to be extremely expensive,” said Elina Seppänen, an energy and climate specialist for the city.”But we have if we have this sort of solution that provides flexibility for the use, and storage of heat, that would help a lot in terms of expense.”

Other research groups, such as the National Renewable Energy Laboratory, are actively looking at sand as a viable form of battery for green power. But the Finns are the first with a working, commercial system. “It’s really simple, but we liked the idea of trying something new, to be the first in the world to do something like this,” said Pekka Passi, the managing director of the Vatajankoski power plant.

Sand Batteries For Every Need

Polar Night Energy says it can design a sand battery for every need, from a single building to an entire town. Each system is individually tailored to the requirements of the customer and are designed based on simulations using COMSOL Multiphysics software, 3-D transient heat transport models, and with real life input and output data. The systems can be buried below ground to preserve space if the surface area of project is limited.

Each system is fully automated and has a nominal power rating of up to 100 MW and a storage capacity of up to 20 GWH. The projected cost of a system is less than 10 euros per kWh of storage capacity. The company says, “Production of renewable energy sources such as wind and solar power is highly volatile and only partly overlapping with the consumption in time. As these volatile electricity sources increase rapidly in societies, more and more energy storage technologies will be needed. Our technology provides a way to refine cheap and clean surplus electricity to valuable heat in an affordable way to be used when most needed.” 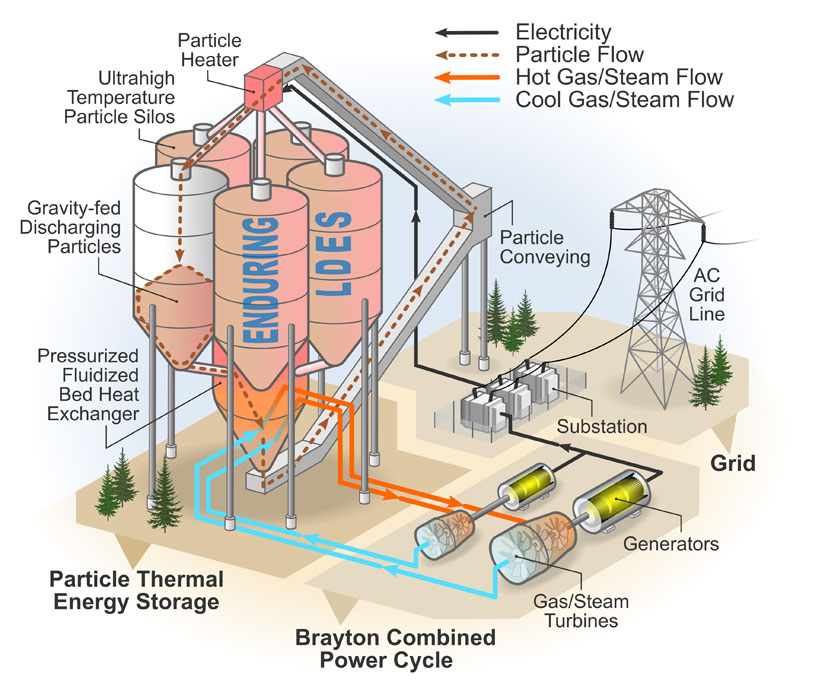 The NREL system differs from the Polar Night system in that is focuses more on using the stored heat to generate electricity. It is well along in testing a new thermal energy storage technology that uses inexpensive silica sand as a storage medium. It says its Economic Long Duration Electricity Storage by Using Low Cost Thermal Energy Storage and High Efficiency Power Cycle (ENDURING) is a reliable, cost-effective, and scalable solution that can be sited anywhere.

ENDURING uses electricity from surplus solar or wind to heat a silica sand which is fed through an array of electric resistive heating elements to heat it to 1,200°C. The heated particles are then fed by gravity into insulated concrete silos where they are stored. The system can store up to 26,000 MWh of thermal energy. With modular design, storage capacity can be scaled up or down with relative ease, NREL says.

When energy is needed, the hot particles are fed through a heat exchanger, where a gas is heated and pressurized to spin generators that create electricity for the grid. The system discharges during periods of high electricity demand and when limited solar photovoltaic or wind power are available. Once discharged, the spent, cold particles are once again fed into insulated silos for storage until conditions (and economics) are appropriate again for charging.

Silica sand is abundant, stable, and inexpensive, with a low ecological impact both in extraction and end of life. Lithium-ion batteries have an exceptional energy storage density but are expensive. Particle thermal energy storage is a less energy dense form of storage, but is very inexpensive at $2 to $4 per kWh of thermal energy at a 900°C charge-to-discharge temperature difference.

The energy storage system is safe because inert silica sand is used as storage media, making it an ideal candidate for massive, long duration energy storage. ENDURING systems have no particular siting constraints and can be located anywhere in the country. These systems may also be constructed using existing infrastructure from retired coal- and gas-fired power plants, NREL says.

Energy storage is the key to the renewable energy revolution. There are ways to create storage that are environmentally friendly and inexpensive. Polar Night and NREL are promoting two of them, but there will be many others as more people focus on the need for massive, affordable energy storage. Something that was unimaginable 20 years ago will be commonplace 20 years from now. Sand batteries may seem strange today, but they will certainly be part of the energy storage mix going forward.

Appreciate CleanTechnica’s originality and cleantech news coverage? Consider becoming a CleanTechnica Member, Supporter, Technician, or Ambassador — or a patron on Patreon. Don't want to miss a cleantech story? Sign up for daily news updates from CleanTechnica on email. Or follow us on Google News! Have a tip for CleanTechnica, want to advertise, or want to suggest a guest for our CleanTech Talk podcast? Contact us here.
In this article:Finland, sand battery