The Tool That Could Unlock the Potential of Geothermal Energy

Deploying 60 gigawatts of geothermal electricity would be enough to provide clean, reliable power for 129 million American homes and businesses. A key factor to unlocking that amount of always-available geothermal energy could be through innovation in subsurface seismic sensors, or geophones.

Clean energy can be generated by using geothermal heat from the core of the Earth, which is as hot as the surface of the sun. As heat radiates upward, it gradually cools to roughly 600°F at around two miles under our feet. Accessing that heat though drilling in viable areas releases very hot, salty water (brine) and steam that rises to the surface. The steam then spins turbines that produce electricity. The brine is injected back into the ground, where it is reheated by the Earth.

Accessing geothermal resources for energy production requires brine to flow through openings in rocks. This means economically viable production needs high temperatures at accessible drilling depths, plus the presence of permeable fractures in the subsurface. When hot rocks in the subsurface are not sufficiently permeable, a technique called enhanced geothermal systems (EGS) can help access the heat contained in the hot rocks by creating new fractures to carry increased amounts of geothermal fluids.

EGS is an ongoing research area that involves the injection of water into the subsurface to create or reopen existing fractures. To perform successful stimulations and ultimately develop efficient EGS reservoirs, researchers need to understand subsurface conditions; geophones allow them to do so.

The word geophone quite literally means “earth” “sound,” which is what the devices detect — acoustic vibrations within the Earth.

The sensors collect rich data sets that provide information about subsurface geothermal reservoirs and how the reservoir rock is evolving before, during, and after EGS stimulations to ensure safe geothermal operations. Geophones can be deployed at the surface or in wells that place them closer to geothermal reservoirs where they can collect more detailed data.

“Fast-tracking the development of technology related to EGS could significantly expand access to geothermal energy across the country,” said Ian Warren, senior geoscientist at the National Renewable Energy Laboratory. “Innovation in subsurface geophones to enable collection of detailed seismic data within and adjacent to high-temperature rocks deep below ground will be a huge advance for developers creating EGS reservoirs.”

To enable the development of 60 gigawatts of projected geothermal electricity capacity by 2050, the U.S. Department of Energy Geothermal Graphic showing the prize logo. The American-Made Geothermal Geophone Prize is designed to address the challenges of operating seismic sensors in geothermal environments.

Technologies Office is focused on advancing EGS and the tools required for safe, effective, and economically viable deployment. The $3.65 million American-Made Geothermal Geophone Prize is designed to address the challenges of operating seismic sensors in geothermal environments.

The Geophone Prize consists of three phases that will fast-track efforts to design, test, and fabricate advanced functional seismometer prototypes. Each stage will include a contest period when competitors work to rapidly advance their solutions with the support of the American-Made Network.

The prize is open to private organizations (for-profits and nonprofits), nonfederal government entities (such as states, counties, tribes, and municipalities), academic institutions, and individuals that meet all eligibility requirements. 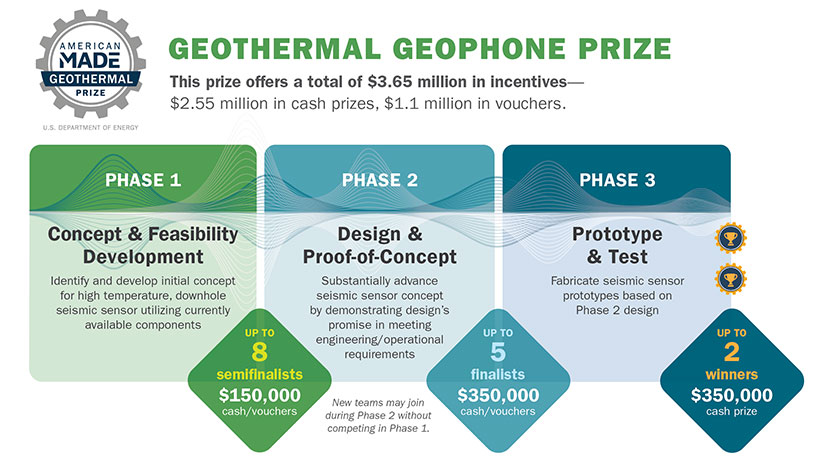 In this article:Geophones, US geothermal energy Drilling Efficiency Demonstrations Will Set the Stage for Transferring Lab Technology to the Marketplace WASHINGTON, D.C. — The U.S. Department of Energy (DOE) today...