We recently took delivery of our second Tesla Model X. The thoughts below are based on our initial review of the new Model X Plaid, but also on a comparison to our 2016 Tesla Model X 90D. 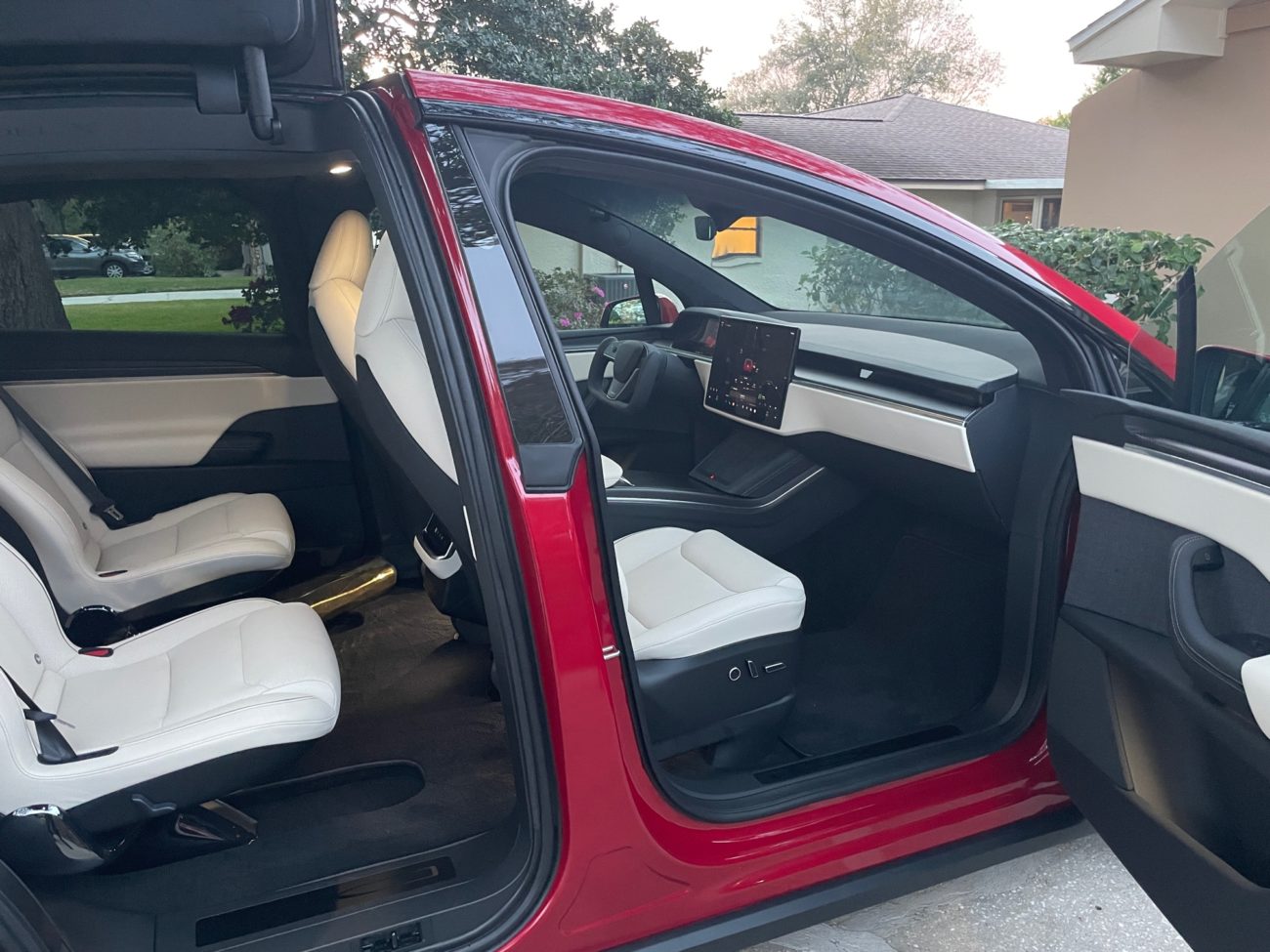 She Says: The X entry process is so nice — press the outside door bar and the driver’s door swings open. Get in and press the brake pedal and the door closes and locks. So very convenient and handy.

He Says: No argument here! This is the convenience feature you didn’t know you could enjoy so much! The door closes itself while you are preparing to drive. Both of our Model X’s had this feature. The self-closing doors never gave any problems on the 90D.

She Says: I like the seats very much, both in the front and the second-row pedestal seats. They can be adjusted to where they are the most comfortable. The lumbar support is the frosting on the cake. On a longer drive, the lumbar support can be changed to your sitting position to increase your comfort. When the outside temperature is cool, the instant heat of the seat heater is wonderful. Add the fact that you can start the warming process from your cell phone app prior to getting in the car.

He Says: The seats are quite comfortable. I can’t precisely pinpoint why, they just are. The fact that when you change from your wife’s settings to yours and the seats, mirror, yoke, and environment settings change from hers to yours — that goes a long way towards family peace and harmony. I especially like the ventilated seats in the cool mode. She Says: Ladies like light! The inside lighting is bright and cheery. While not unique, the headlights remaining on after getting out of the car is so nice and safe. And I just love watching all the lights from outside the car when it does “The Dance!”

He Says: The turn side light illumination at night, incorporated into the turn signal function, is brighter than the ones on our first Model X. A small but appreciated feature is the amber side light. This light assembly is white when viewed from the front and not amber. A small detail but a nicer look.

She says: The bigger screen than the Model 3, plus important information directly in front of the driver, is quite nice. The flexibility of configuring the big horizontal screen is convenient. But I definitely don’t like some of the software “improvements” in the screen layout! Some functions now take two presses when previously they required only one — like the seat ventilation for example. With some things, I can’t believe the Tesla screen designers did what they did, like putting the direction indication compass behind the navigation display on the screen where it cannot be seen or accessed. That wasn’t thought out enough. Really!

He Says: The horizontal center screen is nicer in the larger and higher position than in the lower vertical screen of the original Model X. The screen graphics designer should be older and wear bifocals! The consideration of older driver limitations to focusing would be better. Maybe a choice of screen print font sizes could be incorporated into the software?

She Says: The Yoke is interesting. I love being able to see the dash display with no obstructions. It does take a while to get used to pressing buttons for the turn signals. It is nice not to have to take your hand off the yoke to use them. I understand the lack of a central horn button is being fixed in the software. The horn is impossible to use when turning.

He Says: I can’t believe the freshness the Yoke brings to the dash. The years of compromising steering wheel positions to see the instruments is blissfully gone! Sure, it takes time to get your muscles trained to make a sharp turn in place of slip steering, but you soon get there. Remember, F1 drivers use a yoke — though, admittedly with a faster steering ratio, which I understand is eventually coming to the S and X.

She Says: The three-camera display on the big screen gives a clear view. It’s good to be able to see the cars on both sides at all times, besides their images on the drivers display. But there is a big white open space between the two side camera displays on the screen! Can’t something practical be placed there like arrows that even more graphically show when a car is beside you? It is a waste of useful space to me. Something useful needs to be there!

He Says: The three cameras — rear, left side, and right side — are nice. But perhaps the left and right cameras could be placed on top of the rear view camera. They are small and low when viewed by the driver. The camera views that come on with the turn signal, when the three camera views are off, show a larger view and are easier to see. She Says: I like the fact that the Model X now emits a humming sound that warns pedestrians that a quiet car is behind them. But I am even more tickled by the various horn sounds to select like “La Cucaracha!” for use at slow speeds or when stopped.

He Says: I understand “fart” sounds are coming to the front outside speaker that can be activated by a voice command. Perhaps more enjoyable than the interior seat position “fart” sounds that soon wear thin on your indulging friends!

She Says: Our teenage grandsons love the falcon-wing doors on the original X — a real thrill to them when we picked them up at school during visits. It was interesting that all the kids in line knew all about this Tesla feature. But when they see the new monitor between the front seats viewable from the second row, it is going to be hard to get them out of the car.

He Says: I can see a lot less “are we there yet” questions coming from families with kids in the back seats. The fact that the second row can now do its own temperature controls is a nice distraction reduction for the driver. She Says: I won’t be using the full Plaid acceleration, but I do appreciate having instant acceleration, if the reason arises for it in traffic, as needed.

He Says: A two-second jab to get to sixty miles per hour is priceless when watching, out of the corner of your eye, the expression of the person riding “shotgun” the first time they experience this amazing acceleration. It’s fun telling people that this is faster than an F1 car that is not configured for low speed acceleration — or, perhaps faster than a Bugatti or McLaren is more impressive to them. But, regardless, it is a sensation never previously experienced as your inner ear is asking what the heck just happened! Described but not experienced is the 100 MPH to 150 MPH acceleration time of 5.66 seconds. Check the YouTube Video by DragTimes “WORLD RECORD * Quickest & Most Powerful SUV in the World * Tesla Model X Plaid 1/4 Mile Testing.”

She Says: It is my favorite Tesla. As with any SUV, the higher seating with the view is wonderful. The larger car reduces that intimidation some drivers try to inflict. The large trunk, even larger with the third row of seats down, is convenient for shopping. When Full Self Driving (FSD) gets to the Model X, I may even try it! In the meantime, is there any way to turn off the driving speed on the cell phone app so my husband can’t tell me how fast I was driving when I get home?

He Says: The Model X is the best car in the Tesla stable for burning up highway miles. Autopilot goes a long way towards reducing driver’s fatigue while faithfully keeping a tireless, undistracted, 360 degree watch. It is understandable that the Full-Self-Driving City Street mode is way behind the much higher sales volume 3 and Y vehicles, but hopefully it will quickly catch up.

She and He Both Say: HAVE THE SAFETY SCORE follow the driver cell phone app and NOT the car!

A feature-for-feature competitor for the Tesla Model X will be quite a time coming to market.