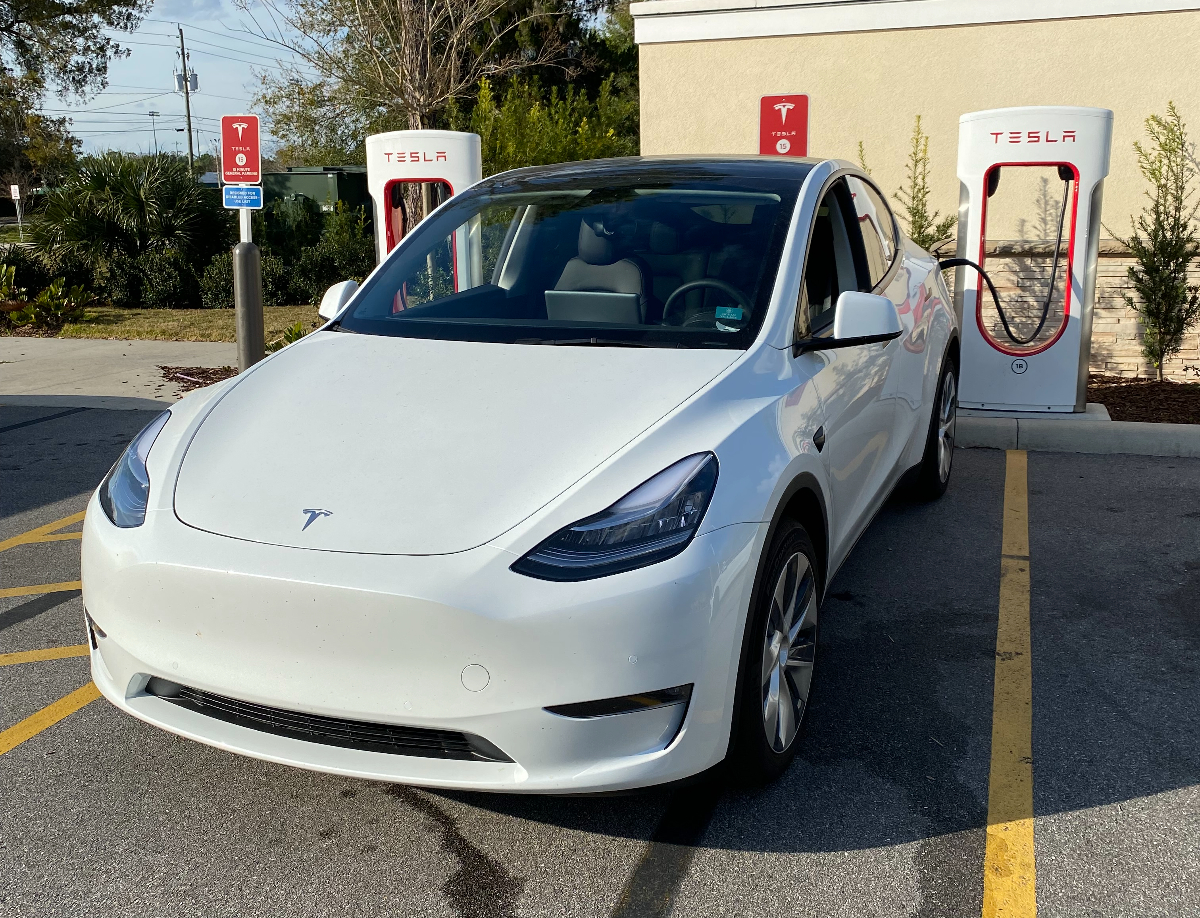 I went on my second road trip with Wylie, my white Tesla Model Y, this week. I did a trip across Florida in December, but that one was different. I was visiting friends who had a dryer in their garage, so I bought an adapter for my Tesla charging cable and charged up overnight at their house. This time I was going to a conference at a hotel in Saint Augustine, so it was the first time I needed to rely on the Supercharger network.

The conference was at the Embassy Suites hotel in Saint Augustine Beach. Prior to leaving, I went on its website, which said its amenities included EV chargers. Cool! I could get there without stopping, plug in, and have a full charge in the morning. I even called the hotel to verify that chargers were available and was assured they were. So, I arrived at dusk with the battery indicator showing 11% state of charge (SOC). The valet said he would be happy to park the car and plug it in for me.

After a shower, I checked my Tesla app, which said Wylie was parked but not charging. So I went down to talk to the valet, who apologized but said my charging cable did not fit the plug available. What? Don’t EV chargers have their own charging cables? We went into the parking garage together and lo and behold, there were no EV chargers! Wylie was backed up to a standard 110V wall outlet. [Update: It turns out the adapter for 110V charging was in the frunk.]

So now, it is fully dark, I am in a strange town, and I need a Supercharger. The nearest one is 11 miles away out near Route 95. I could have charged there on my way, and would have if I had known there were no chargers at the Embassy Suites. Now, I know this is silly, but I had never once used a Supercharger and was a little apprehensive about it. How would it work? Would I have difficulty starting the charging process? If the location I was headed to didn’t work, would I have enough charge to get to another Supercharger?

We’ll find out in a moment. First, be advised, Embassy Suites in St. Augustine Beach does not have EV chargers! The next morning, I contacted the corporate offices and told them how dissatisfied I was to be lied to about the availability of EV chargers at their hotel. I even told them I was a big shot writer for a major international publication and I was going to let my readers know to avoid their hotels. It has been 5 days and I have heard nothing from Embassy Suites. Apparently, they have no interest in doing business with people who drive electric cars. There, I feel better now that I have that out of my system. Yes, I know all of you think I am an ignorant clod, but there is always a certain trepidation that comes with trying something new for the first time. On the way to the Supercharger, a message popped up telling me Wylie had started preconditioning the battery for fast charging. Sweet! I had no idea what preconditioning meant, but it was a great comfort to know the car was watching out for me.

I found the Supercharger location at a Wawa, backed my Model Y in, plugged in, and was amazed to see the touchscreen light up immediately to show that charging had started. At first, it charged at over 200 kW of power, enough to add more than 700 miles of range in the course of an hour.

Most of you know what happens next. As the battery charge increased, the charging rate decreased. By the time it got to 78% SOC, things had slowed pretty much to a crawl. Most of you know this stuff but it was news to me. Here I am writing about electric cars and seeing all the announcements about how such and such a car can charge to 80% in 15 minutes or less but it never really sunk in until I experienced it for myself.

To get from 80% to 95% takes a looooonnng time. It is faster to stop at less than 20% and charge to 80% than it its to stop at 40% and charge to 95%. Maybe you already knew that, but it was a valuable lesson for me to learn. I stopped 3 more times at a Supercharger during the trip, and I can say, without hesitation or fear of contradiction, travelling with a Tesla is as easy as falling off a log. There are no worries and nothing to be jittery about.

Enter your destination and the car knows where you should stop to recharge and precisely what your SOC will be when you get there. It’s uncanny and so simple that even a big shot writer for a major international publication can figure it out. If you want to drive an electric car but have range anxiety, relax.

Many of the Supercharger locations in Florida are at Wawa stores. They are clean, well lit places with restrooms, but there is nothing inside them a person should eat. By and large, anything that comes in a package these days is filled with salt, fat, high fructose corn syrup, and empty calories. Certainly none of it can be considered nutritious. Kudos to Tesla for providing a safe environment for people to charge their cars, but Wawa? Really? How about someplace that serves food? [Update from editor: Some readers claim Wawa is famous for serving real food. I don’t think I’ve ever been in one, so I cannot confirm.]

The last time I charged on the way home was at a Target. Yes, it was 1.5 miles from the highway, but there were two restaurants nearby and I actually bought some stuff at Target since I was there anyway. It was a much better choice than the Wawa stations I visited with their racks and racks of potato chips, Doritos, and candy bars.

Another thing I learned is that I should allow 20 minutes to half an hour for each charging event. That is longer than it takes to fill a gas tank, but there are advantages. You get to walk around, stretch your legs, and clear your head. If you are a “gas and go” kind of person, the EV experience may not be for you. But it is far more relaxing and you arrive feeling refreshed.

To read the second half of Steve’s road trip review of the Tesla Model Y, head on over to CleanTechnica Pro. If you aren’t yet a member, join here.