New York City has committed to going all electric with its school buses by 2035. The first electric school buses are hitting the city’s streets now and they are pioneering a new model for transitioning their fleet. Instead of buying buses, Logan Bus Company, which provides transportation services for the city, is having 5 older diesel buses converted to electric.

The technical term for this conversion is a repower. Repowers involve converting an existing diesel bus by removing the internal combustion engine components and replacing them with an electric drivetrain, motor, and batteries. In New York City’s case, a company called Unique Electric Solutions (UES) is doing the repower. To our knowledge, UES is the first company to repower a school bus since early efforts by Blue Bird in the 1990s with the ancient, lead-acid technology of 30 years ago. The first diesel to electric school bus repower of modern times occurred in 2017 when UES repowered two buses for Suffolk Transportation Services. Four years later, those buses are still on the road.

These repowered school buses in New York also might be the first of an oncoming tidal wave of repowered diesel to electric buses. The companies SEA Electric and Midwest Transit Equipment just announced an effort to repower 10,000 buses over the next five years. If these companies succeed in converting all of these buses from diesel to electric, it would increase the number of electric school buses on the road today by a factor of 10.

How Do Repowers Work?

UES Vice President Mike Backman walked me through his company’s repower process. Before a repower can occur, a route and needs assessment must be conducted. All school bus manufacturers work with districts to see how far the route is and what its terrain is like. If a district’s route is relatively short and flat, this initial assessment will size a battery accordingly and save a school district money since batteries are the most expensive part of a vehicle. For repowers, the batteries typically come in modular sizes of 50 kWh, meaning a school district can add more battery packs to a repowered bus to increase range. Ranges typically vary from 70-100 miles.

Repowers also include a bus assessment. “Buses are all different,” Backman explained, “some are better suited than others for repowers.” There is a sweet spot in age and condition for school bus repowers. Brand new buses and vehicles can be repowered but at that point it almost feels like you might as well have built the bus electric to begin with. Still, companies are doing it. Lightning E-motors, for example, takes brand new Ford Transits and converts them to electric transit vans. On the other hand, if a vehicle is too old or worn down, it runs the risk of putting sparkling new electric components into a shell that is near retirement. The sweet spot age for repowers runs from 3 to 12 years old (depending upon weather and geography). 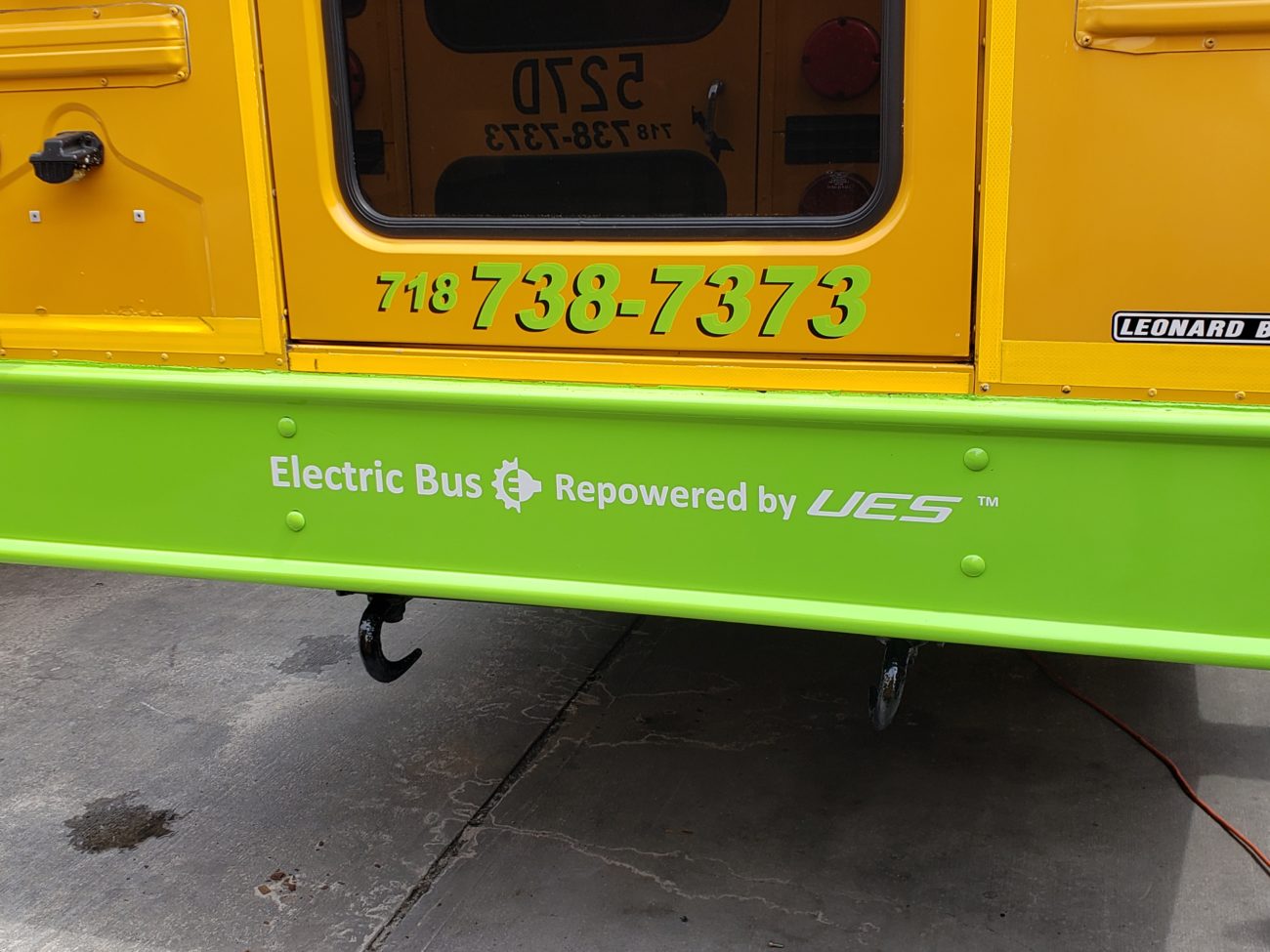 After the vehicle assessment comes the conversion process, and this is where the repower shifts into full gear (poor pun intended — ESBs often don’t have transmissions).  “All of the dirty stuff gets taken out, including the engine, the diesel fuel tanks and fuel lines, the turbo charger, transmission, the tailpipe, muffler, etc.,” Backman said. “Basically, all of those will come out and in their place we’ll put a single clean electric motor with only a handful of moving parts, along with electronics, cabling, batteries, and a driver dashboard.”

The once-diesel bus becomes electric. The final step is quality control and safety check. These buses carry precious cargo and this task is of course crucial. After that, the bus is ready to go into action.

Speed of conversion: Repowers take only a matter of weeks, which is substantially less than getting into line for a new electric bus, although current parts shortages plaguing the automotive industry are also affecting repowers. Some districts and private operators I’ve talked with are nervous about the idea of repowers for liability reasons. They worry that substituting the original diesel components of a bus increases the likelihood that something could mechanically go wrong while buses are transporting our most vulnerable population — students.

Companies like UES respond that retrofits have been happening for years, they’ve just been diesel, propane, or CNG retrofits rather than electric ones. And they say that diesel to electric repowers remove only the drivetrain components without touching other existing systems. Repowers remove the majority of mechanical parts that cause breakdowns and so there is the expectation that they will be subject to less mechanical issues in general, compared to diesel buses, like all electric vehicles. And they reduce other dangers, like harmful diesel fumes.

Another concern with repowers is the longevity of the old chassis. If you’re converting a 5- to 12-year-old diesel bus into an electric bus, it may not make sense to have a new drivetrain that can outlast the old body and chassis.

Repowers are still on the bleeding edge of electric school bus technology, so we won’t have extensive data on longevity of these vehicles for some time. But there are reasons for optimism. Repowering a vehicle removes many maintenance-prone components. Companies predict these electric drivetrains may last long enough to be reinstalled into yet other repowered vehicles after the bus chassis/body itself expires.

AMPLY is part of a wave of charge management companies figuring out how to make it easy for districts to electrify their fleets. These companies are pioneering a model where they front the upfront costs of installing charging stations and protect districts from the variability of electricity prices, which can change dramatically depending on what time of day you charge your bus. When contracting with a charge management company, districts pay consistent costs for electric fuel over the period of their contract that are cheaper than fossil fuels. In New York City, AMPLY will cover the costs of installing chargers and Logan Bus Company will pay by the kWh of electricity they use or by the mile. This model is similar to the Power Purchase Agreements in the solar industry that started a decade or so ago where companies installed solar on customers’ roofs for free and then customers paid them back through normal electricity costs over time.

In this NYC project, these first 5 electric buses will also provide power back to the grid during peak times of electricity usage. Using electricity stored in the buses has a great potential to help local utilities reduce their reliance on fossil fuel power plants, which ramp up during times of heavy demand.  A Thomas Built Bus was able to provide 3 megawatts back to the grid in a pilot in Massachusetts this past summer, proving the vast potential for school buses to provide this service. Vehicle-to-Grid charging with electric school buses is still in its infancy, and it’s exciting that AMPLY will share the data it collects from the project so we can all learn more.

The first electric buses to hit NYC’s streets will thus benefit from significant innovation. They’ll be converted from running on dirty diesel to clean electrons. They’ll cost less than half the price of a new electric school bus, and they’ll benefit from managed charging where the school district won’t have to pay high upfront charger installation costs and won’t have to worry about uncertain, variable electricity rates. They’ll also help power the grid during times of peak demand. The team on this project is attempting to solve some of the major barriers to school bus electrification, and if they’re successful could speed up electric school bus adoption everywhere.