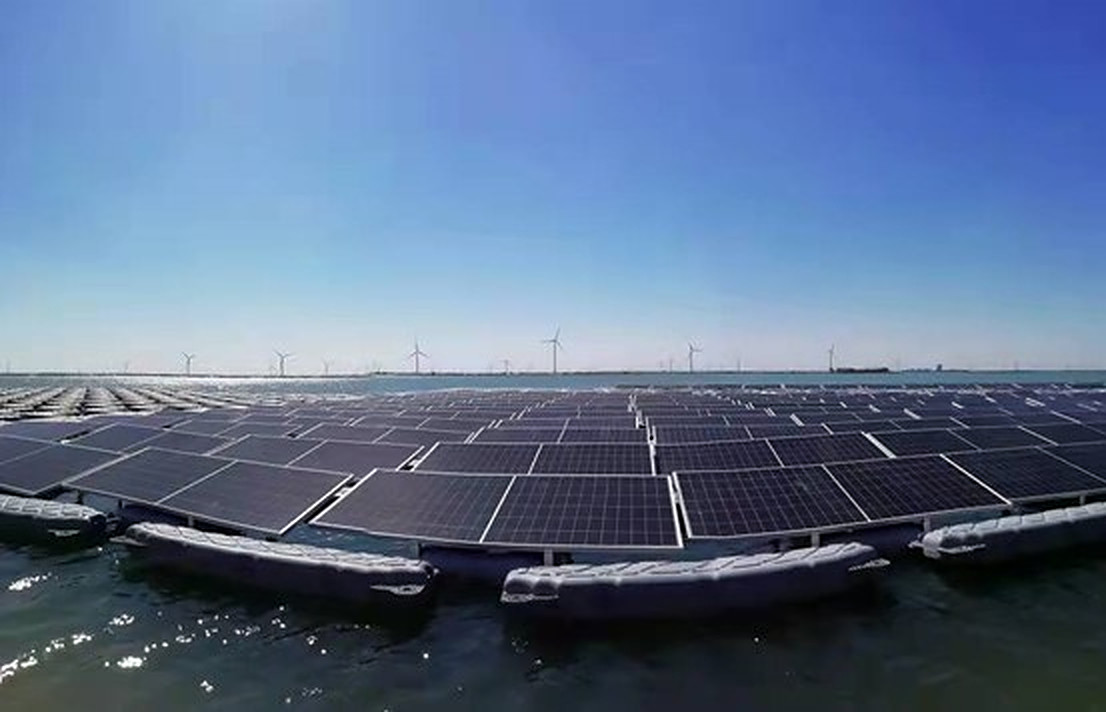 Below are three short summaries of recent renewable energy and climate-related news from NexusMedia.

The world’s largest floating solar power array is now online in China’s Shandong province. The 320 MW facility built by Huaneng Power International is expected to generate around 550 GWh per year, according to the company. The panels float atop a reservoir near a much larger thermal power station, and the array is integrated with energy storage capacity and a nearby wind farm. Beyond cutting greenhouse gas pollution, floating solar arrays can produce co-benefits like reducing evaporation and boosting solar efficiency. HPI is currently building an experimental floating array more than six times larger in Jiangxi province that will include agrivoltaics and solar parks above fish ponds.

West Virginia senator Joe Manchin voiced support for climate provisions in the Build Back Better Act Tuesday, telling reporters, “The climate thing is one that we probably can come to an agreement much easier than anything else.” Manchin, who has made millions from the coal company his family owns and has received more campaign donations from the fossil fuel industry this election cycle than any other senator, also said “as we move from a fossil dependency to more of a cleaner, and you do that by using fossils in cleaner ways.”

Last fall, Manchin effectively gutted the Build Back Better Act of a key climate provision that would have incentivized utilities to provide cleaner electricity to their customers. Manchin, a millionaire who has never given birth, reiterated his opposition to other parts of the Build Back Better Act, including paid family leave and Medicare expansions and also said unemployed people should be barred from receiving any extension of the child tax credit.

FEMA disaster relief programs, “often fail to deliver assistance to those with the greatest need” and worsen “the continued ‘wealth gap’ in the United States,” a report by the agency’s National Advisory Council says. Desperately needed aid following disaster, including hurricanes, floods, and other extreme weather fueled by climate change, “is not distributed to individuals that most need assistance,” so those who “started with less receive disproportionately less.” Part of the problem, as described in the 2020 report, stems from the fact that wealthy homeowners get “an additional boost” from relief programs while landlords receive benefits while their poorer renters “sink further into poverty after disasters.” Bureaucratic hurdles also prevent less-resourced municipalities and individuals from accessing the relief they need. The advisory group issued similar criticisms last year.

Many are also raising concerns over the potential for bureaucracy in the disbursement of forthcoming climate resilience funding in the bipartisan infrastructure package exacerbating systemic inequities. “There’s a lot of money out there. How do we actually get the infrastructure in place to go after it?” Colin Wellenkamp, executive director of the Mississippi River Cities and Towns Initiative who has been helping communities navigate the new funding options and application processes, told Politico. “It’s overwhelm[ing] in a good way. It’s a good problem to have. It’s a lot better than the problem of ‘we have no resources at all.’”

A raging urban firestorm fueled by hurricane-force winds incinerated nearly 1,000 homes and structures in and around Boulder, CO in just one day, making it the most destructive wildfire in the state’s history. “With CLIMATE CHANGE, there is no FIRE SEASON anymore,” tweeted Mike Nelson, chief meteorologist for Denver7, the city’s ABC affiliate. Climate change, primarily caused by the extraction and combustion of fossil fuels, supercharges fires like the Marshall Fire through increased temperatures and exacerbated drought. The blaze, which ignited Thursday, was effectively extinguished by snowfall by the next day. More than 30,000 people were forced to evacuate but just two people were missing as of Monday.

How to give and get help (Boulder Daily Camera), how climate change primed Colorado for a rare December wildfire (CNBC), fires outside of Denver were the most destructive in Colorado history (NPR), climate change-fueled blaze destroys 1,000 homes in Colorado in rare winter wildfire (Democracy Now), climate scientists grapple with wildfire disaster in their backyard (Axios), photos: wildfires engulf 1,000 homes in suburban Denver (NPR).

Don't want to miss a cleantech story? Sign up for daily news updates from CleanTechnica on email. Or follow us on Google News! Have a tip for CleanTechnica, want to advertise, or want to suggest a guest for our CleanTech Talk podcast? Contact us here.
In this article:Boulder (Colorado), Build Back Better, Build Back Better Act, China, Colorado, FEMA, fires, floating solar power, floating solar power plants, Huaneng Power International, Joe Manchin, Wildfires