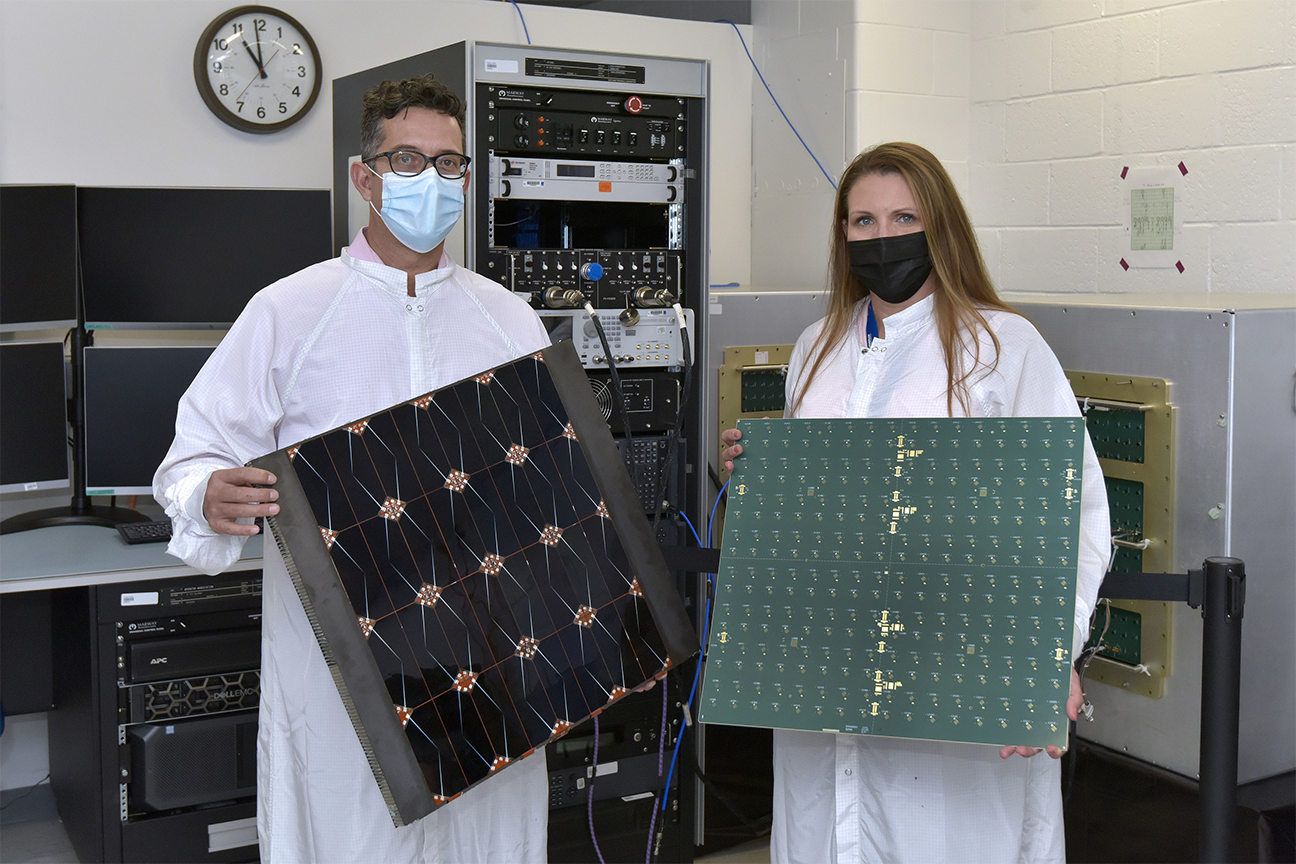 These modest looking panels could make space solar power happen by 2025 (photo courtesy of Northrup Grumman via US Air Force).

Just five years ago, the idea of harvesting solar energy in outer space and beaming it down to generate electricity on Earth seemed pretty far-fetched. Well, the fetching has come closer over the past couple of years, and a new breakthrough from the Army Research Lab indicates that the US is only a few years away from making space solar power happen.

The Long Road To Space Solar

If you’re wondering why go through all the trouble of beaming solar energy down from space when you could harvest it here on Earth with the latest generation of low cost solar cells, that’s a good question.

Fans of space solar power have been trying to answer that question since at least 2010, when the US-based National Space Society teamed up with researchers in India to take on the challenge.

In 2014, the US Naval Research Laboratory chipped in with this observation:

“What if you could capture solar power in space, then send it down to Earth? What if you could launch the hundreds of modules for such a satellite, then use robots to assemble the entire array in space? You could power a military installation, a city—even on a cloudy day, even at night.”

Navy researchers were already far along with their space solar power project by then, and in 2015 Northrup Grumman jumped into the field to establish something called the Space Solar Power Initiative at the California Institute of Technology.

CleanTechnica caught wind of the project and noted an additional benefit of space solar power. Locating very large arrays of solar energy collectors in space would help decarbonize the global economy while preserving terrestrial real estate for other activities such as agriculture, cultural activities, recreation, and nature preservation.

Texas provides a good demonstration of just how fast the approval of new transmission lines can accelerate clean energy development. In contrast, the tangled tale of the Grain Belt Express transmission project in the Midwest illustrates how state-level opposition can add years to a timeline. That particular project got on the drawing board in 2011 and it is still bogged down in lawsuits.

Where were we? Oh right, space solar power. Right around this time last year we noted that the US Air Force Research Laboratory has also been active in the area, through its “Space Solar Power Incremental Demonstrations and Research” solar beaming project, aka SSPIDR. The project is a collaboration with Northrup Grumman, which won a $100 million contract for the project from AFRL in 2018 (if you know what happened to the Navy’s role in all this, drop us a note in the comment thread).

As of last December, the project had advanced to the stage of building a spacecraft to hold equipment for conducting space solar power experiments. Northrup Grumman was responsible for delivering the “bus” for the SSPIDR spacecraft, dubbed Arachne, meaning the element that houses the payload, which in this case is the platform that houses equipment for experimenting with space solar power.

Just about twelve months later, here we are in December 2021 and the Air Force Research Laboratory has some new news to share along with Northrup Grumman.

The announcement concerns the first “end-to-end” demonstration of critical elements of the space solar power system, which took place earlier this month. Specifically, the demonstration involved something called the “sandwich tile,” which is the key to unlocking the whole mystery of solar power from outer space.

“The sandwich tile consists of two layers. The first layer is a panel of highly efficient photovoltaic (PV) cells which collect solar energy and provide power to the second layer,” explains AFRL. “The second layer is populated with components that enable solar to RF [radio frequency] conversion and beamforming.”

“Converting solar energy into RF energy at the component-level is a pivotal step to realizing space-based solar power beaming on a larger scale,” adds Melody Martinez, SSPIDR deputy project manager, by way of emphasizing that this thing is really happening.

It seems that Northrup Grumman and AFRL were well prepared for a successful demonstration, because they invited stakeholders to witness the goings-on.

“The ground demonstration used a solar simulator to illuminate the PV side of the tile and begin the Solar-to-RF conversion process,” AFRL recounts. “Because the solar simulator was so intense, attendees viewed real-time RF output data on monitors from behind an industrial grade flexible plastic barrier, and cheered when an RF energy peak appeared indicating successful power conversion and RF radiated power.”

Arachne is scheduled to launch in 2025, so Northrup Grumman and AFRL have lots of prep work to do between now and then.

Topping the to-do list is replicating the successful sandwich tile module to cover a panel measuring one square meter.

According AFRL, the one-meter milestone has yet to be met by any other team, though recent progress on the SSPIDRS project may have lit a fire under some governments that had been dismissing the feasibility of space solar power.

Just last September, for example, the UK Space Agency reported the results of a study it commissioned on space solar power. The study concluded that the technology is feasible and worthy of government support. UKSA also pointed out that technology spinoffs from a space solar power research program would have broad applications on Earth and help the UK meet its decarbonization goals, even if the project never gets to the deployment stage.

Meanwhile, if you’re wondering what the Air Force is doing in the area of solar research, that’s an easy one. The Air Force was an early adopter of solar energy for its facilities during the Obama administration, and it has also been a leading funder of foundational research on solar energy management systems and solar energy technology.

The Air Force’s deep pockets also enable it to step in when other federal offices don’t have sufficient funding in hand. For example, last year AFRL threw a lifeline to the Energy Department’s National Renewable Energy Laboratory, which was seeking a financial assist to develop a new high efficiency, low cost solar cell.

If the space solar power demonstration works out, that will be great news for advocates of climate action, though saving the planet is not uppermost in the mind of AFRL. The real motivator behind the effort is the military advantages of having a supply of relatively inexpensive, noiseless, pollution free power on call 24/7 practically anywhere in the world, so stay tuned for more on that.

Don't want to miss a cleantech story? Sign up for daily news updates from CleanTechnica on email. Or follow us on Google News! Have a tip for CleanTechnica, want to advertise, or want to suggest a guest for our CleanTech Talk podcast? Contact us here.
In this article:Air Force (USAF), California, National Space Society, Renewable Energy, space solar power, SSPIDR, usa