2021 has been a year of ground-breaking discoveries and technology successes for the National Renewable Energy Laboratory (NREL). Below are just a few highlights from this year with links for each to read more.

More than 12 years ago, at the start of NREL’s current management contract with the Alliance for Sustainable Energy LLC, NREL’s partnership outreach accelerated. During that period, the laboratory has generated partnership projects totaling more than $1 billion in research-and-development contract value. In fiscal year 2020, NREL delivered a single-year milestone, booking $102 million in new partnership agreements, and that activity continues to grow. NREL researcher Alli Werner prepares an experiment to evaluate the ability of engineered P. putida bacteria (in the flasks) to degrade polymeric plastics, such as polyethylene terephthalate (PET). NREL’s goal, in collaboration with industry, university, and government laboratory partners, is to use bio-based methods to convert these plastics into monomers that can be upcycled into high-value plastics once again—creating a circular plastics economy. Photo by Dennis Schroeder, NREL

2. Documenting a Decade of Cost Declines for PV Systems

NREL’s U.S. Solar Photovoltaic System and Energy Storage Cost Benchmark: Q1 2020 is now available, which applies a bottom-up methodology that captures variation in system design and regional costs, helping to identify future research and development directions that could further reduce costs. The last decade has shown a sharp, though now steadying, decline in costs, driven largely by photovoltaic (PV) module efficiencies (now 19.5%, up from 19.2% in 2019) and hardware and inverter costs. Since 2010, there has been a 64%, 69%, and 82% reduction in the cost of residential, commercial-rooftop, and utility-scale PV systems, respectively.

The transportation sector is the largest source of greenhouse gas emissions in the United States, accounting for about 28% of total carbon emissions. According to the Intergovernmental Panel on Climate Change, greenhouse gas emissions must be reduced by 50%–85% by 2050 to limit global warming to two degrees Celsius. To help light that path to net-zero emissions, NREL has released a comprehensive vision for deeply decarbonizing transportation, a strategy rooted in cross-cutting research and engineering to enable industry stakeholders, communities, government agencies, and early adopters to meet their climate goals. Scientists at NREL — working with researchers at NASA and in Europe — identified a solution to preventing a dangerous chain reaction in lithium-ion batteries known as thermal runaway. Most cases of thermal runaway can be traced to an internal short circuit. That short generates an increasing amount of heat that can trigger a failure in adjacent batteries and spark fires. The researchers examined a polymer current collector with an inside layer of plastic between the metal.

Results from the Los Angeles 100% Renewable Energy Study (LA100) show meeting LA’s goal of reliable, 100% renewable electricity by 2045 — or even 2035 — is achievable and will entail rapid deployment of wind, solar, and storage technologies this decade. The study paves the way for other jurisdictions to reach their own clean energy goals, equitably and economically. NREL offered uniquely technology-neutral, holistic, and best-in-class capabilities to help Los Angeles navigate its clean energy transition.

To take a bite out of transportation energy use and emissions and combat climate change, NREL partnered with Google to develop more eco-friendly routing in Google Maps, which now defaults to the route with the lowest carbon footprint when it has approximately the same estimated time of arrival as the fastest route.

NREL announced a new initial memorandum of understanding with the global company UL to work toward further developing and commercializing the Solar Automated Permit Processing Plus (SolarAPP+) software that will automate the permitting process for residential solar systems. The use of SolarAPP+ so far has enabled local governments to cut down on the time required to grant a permit from a national average of five business days to zero.

40 U.S. patents were issued to NREL during fiscal year 2020, a bump from the 32 issued during the prior fiscal year. NREL filed 188 patent applications in FY20, up from 124 the year before. Of 269 disclosures filed with NREL’s Technology Transfer Office as the first step toward either patent or copyright protection, 153 fell in the category of a record of invention and 116 in the area of software.

In June 2020, NREL expanded from its sunny campus in the foothills of Golden, Colorado, to the frozen tundra of Fairbanks, Alaska, by adding the Cold Climate Housing Research Center (CCHRC) to its team. The inaugural year saw several notable collaborations, including a project to create affordable prefabricated housing, advice on improvements to military housing, and construction of demonstration homes in marginalized communities. 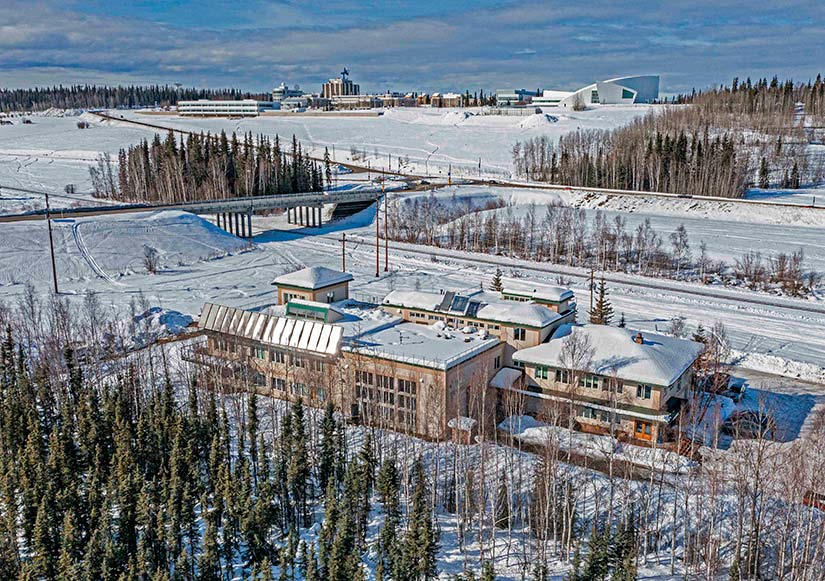 The Cold Climate Housing Research Center is the farthest-north LEED Platinum building in the world, demonstrating a variety of energy efficiency and renewable energy strategies to show what is possible in the subarctic climate. Photo by Seth Adams

Since the early 1990s, First Solar Inc. and NREL have been collaboratively breaking ground on thin film solar technology, helping NREL fulfill its goal as a Department of Energy national laboratory of commercializing technology through partnerships and contributing to First Solar’s success in development, manufacturing, and operation of photovoltaic power plants with technology that still bucks industry trends.

In November 2020, multinational powerhouse Emerson acquired a startup company, 7AC. It was a big deal in the world of cleantech startups — a fairy-tale ending for a startup company whose technology had made it to the HVAC commercial market. 7AC founder and Vice President of Technology Peter Luttik described the story as a case study in successful public-private partnerships.

Specialized photovoltaic panels turned to the sun have been used to generate electricity for Mars rovers and space probes, but the manufacturing costs of these high-efficiency solar cells are too high for use on Earth. Researchers at NREL are testing ways to bring those costs down for terrestrial applications and transforming how PV technologies could work in space as well. The latest test will evaluate the potential use of perovskite solar cells in space and assess the durability of materials used in those cells. 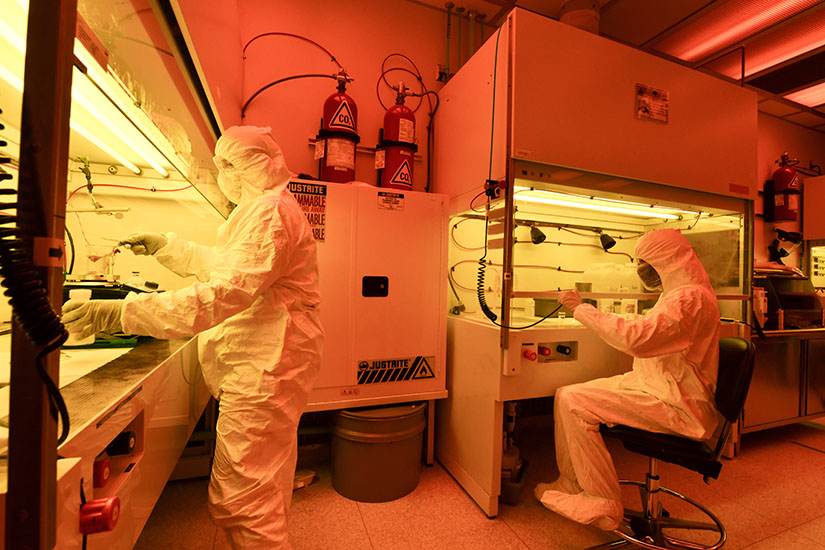 A 24-acre family farm purchased by Jack Stingerie in 1972 that grew hay, wheat, and hosted cattle over time has now evolved into a model for how to produce energy and food in tandem. Researchers with DOE’s InSPIRE project partnered with NREL, Colorado State University, University of Arizona, and father-and-son team Kurt and Byron Kominek to create Jack’s Solar Garden, a successful agrivoltaics project in Longmont, Colorado. Multiple agrivoltaics activities including crop production, pollinator habitat, ecosystem services, and pasture grass for grazing are being researched across the site.

President Joe Biden visited NREL’s Flatirons Campus in September to speak with NREL leadership and to speak with NREL leadership and to learn about the laboratory’s research facilities, capabilities, and critical initiatives housed on the Flatirons Campus. During the visit, the president spoke to a livestream audience and attending news media about his plans on infrastructure, environmental justice, and how to tackle the climate crisis. 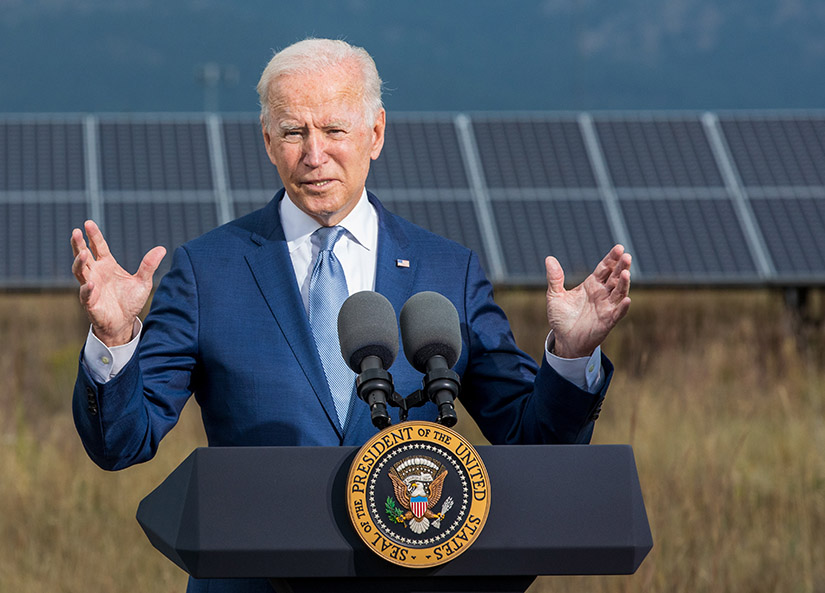 President Joe Biden speaks during a visit to the NREL Flatirons Campus in Arvada, Colorado. Photo by Werner Slocum, NREL

NREL and clean hydrogen company Electric Hydrogen have inked an agreement to develop high-performance electrolyzer components, helping to scale clean hydrogen and invent new opportunities for decarbonization. The three-year, $3.6 million collaboration will diagnose sources of degradation in commercial electrolysis cells and will validate advanced designs that use higher stack currents.

Uniting the Eastern and Western U.S. electric grids could offer significant value in strengthening the power system’s ability to share generation resources and flexibility across regions, according to the Interconnections Seam Study. Results show that increasing the transmission capacity between the Eastern and Western Interconnections could enable more economically efficient and flexible exchange to power throughout the United States — with scenarios showing up to $2.50 in benefits for every $1 of cost. R&D World magazine presented NREL with two of its annual R&D 100 Awards for research innovations. Including this year’s winners — the dGen™ software and the Wave Energy Converter Simulator — NREL has received 71 R&D 100 awards since 1982. Given annually, the R&D 100 Awards honor the 100 most innovative technologies of the past year and are chosen by an independent panel of judges.

Through Net Zero World, led by the DOE as part of the Build Back Better World initiative, countries committed to raising their climate ambitions will work across U.S. government and DOE’s national laboratories to create and implement highly tailored, actionable, technology roadmaps and investment strategies for key countries that will put global net zero within reach. “NREL and the other DOE laboratories are ready to team with countries in tailoring and applying our state-of-the-art tools and data, testing and simulation facilities, technology, and markets expertise to assist countries with net-zero energy transitions,” NREL Director Martin Keller said at the launch event.

Eight researchers affiliated with NREL are on this year’s list of Highly Cited Researchers, with many familiar names from the 2020 list. The affiliated researchers from NREL are Matthew Beard, Joe Berry, Keith Emery, Joseph Luther, Michael McGehee, Su-Huai Wei, Mengjin Yang, and Kai Zhu. The list identifies researchers who demonstrated significant influence through the publication of highly cited papers published in journals that rank in the top 1% by citations. Joey Luther, pictured here with a solution of all-inorganic perovskite quantum dots showing intense photoluminescence when illuminated with UV light, is one of eight NREL scientists named to the 2021 list of Highly Cited Researchers. Photo by Dennis Schroeder, NREL

NREL has selected Hewlett Packard Enterprise to build its third-generation, high performance computing system, called Kestrel. Named for a falcon with keen eyesight and intelligence, Kestrel’s moniker is apropos for its mission — to rapidly advance the DOE’s energy research and development efforts to deliver transformative energy solutions to the entire United States. Installation of the new system will begin in the fall of 2022 in NREL’s Energy Systems Integration Facility data center.

The above accomplishments are only a snapshot of all the amazing research and collaboration taking place each day at NREL. Visit our News webpage to discover more ways that NREL researchers are advancing the science, development, commercialization, and deployment of renewable energy and energy efficiency technologies. You can also view stories highlighting top NREL accomplishments in Wind research.

Thank you to all who helped shape 2021 into a successful year! We look forward to the further advancements that 2022 brings.

Don't want to miss a cleantech story? Sign up for daily news updates from CleanTechnica on email. Or follow us on Google News! Have a tip for CleanTechnica, want to advertise, or want to suggest a guest for our CleanTech Talk podcast? Contact us here.
In this article:Alliance for Sustainable Energy, Cold Climate Housing Research Center, First Solar, LA100, National Renewable Energy Laboratory (NREL), NREL Cold Climate Housing Research Center (CCHRC), patents, SolarAPP+