Remember back in 2018 when Elon Musk tweeted that Tesla was working on a mini car that could “squeeze in an adult?” Sadly, a few years have passed and we have yet to see a mini Tesla EV come into production. But what would a Tesla mini car look like?

Taking inspiration from Tesla‘s current lineup, the team over at The Clunker Junker have created a series of concept renders visualizing the Tesla mini car in all its glory.

Courtesy of The Clunker Junker.

Hey there, sorry for being late. I’m the Tesla Model A, or what my creator refers to as the Tesla mini car, and I’m the smallest Tesla on the block, but don’t let my petite size fool you. If Model X has falcon doors, I got scissor doors. And because I’m a Tesla, I have more high-tech features than your average small EV. Oh, and did I forget to mention I look good, too? Model A is the first Tesla coupe. Inspired by the tall-boy styling of Model Y, Model A has a pair of scissor doors, four seats, and a full glass canopy. Like every Tesla, safety is a critical aspect of the overall Model A design. The metal and aluminum structure offers maximum strength in every area. The rigid body structure, lower center of gravity, and generous crumple zones provide unparalleled protection in a crash. The Model A is unlike any other car. The doors slide out and lift upwards to facilitate ingress and egress. Automatic sliding and semi-folding front seats make it effortless to climb in and out of the rear seats. The minimalist, guilt-free interior features recyclable and sustainable materials derived from hemp fiber, discarded milk cartons, and wine corks.

You can still use your smartphone as a key and access all driver controls in the central 13-inch portrait touchscreen. The all-glass electrochromic roof extends from front to back, offering passengers a seamless view of the sky or maximum shade if desired. Roomy to a Fault

Model A has the tiniest footprint of any Tesla car, but interior space is never compromised. The stretched wheelbase and almost non-existent overhangs promise ample room for four adults, while the forward-designed instrument panel improves legroom in the front. The understated interior features a sliding center console with plenty of covered storage and wireless charging for two smartphones. 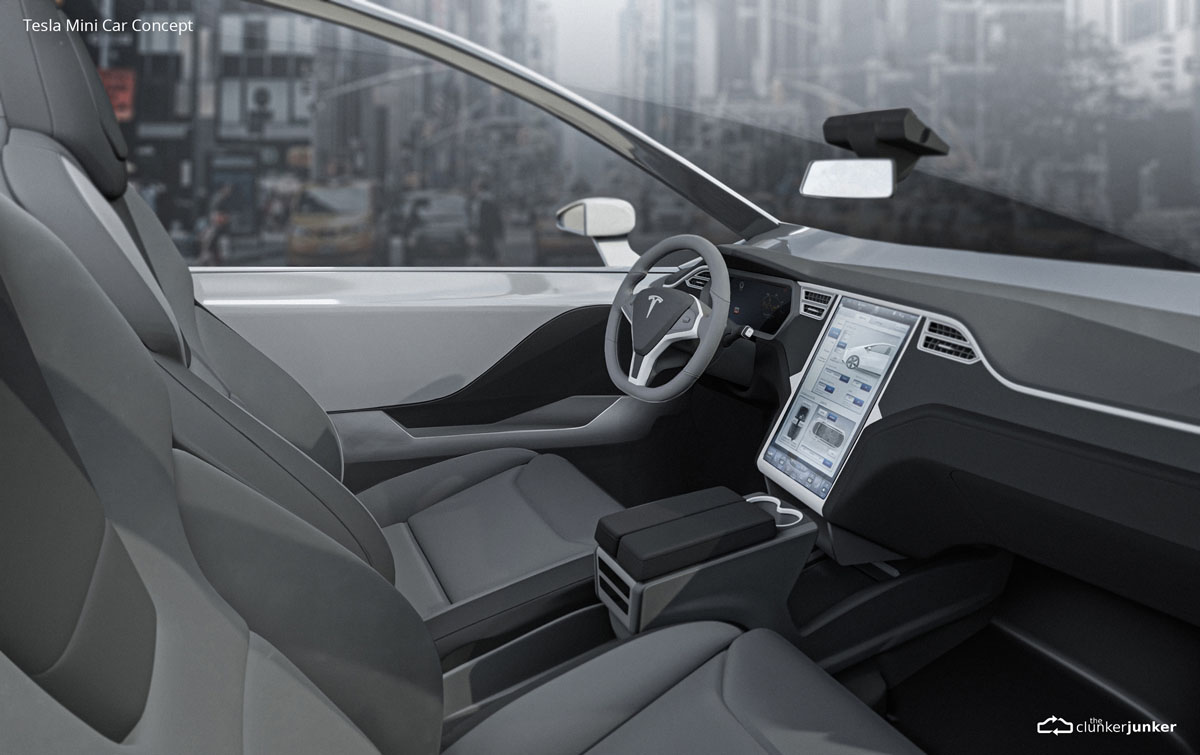 Why We Decided To Create The Tesla Mini Car Concept

Tesla CEO Elon Musk ceremoniously tweeted that the carmaker is working on a new pint-sized EV that can “squeeze in an adult.” That was in 2018, a full year after introducing the Tesla Model 3. Unless Musk was talking about a ¾ scale Tesla by The Little Car Company, Tesla fans and converts have long clamored for a genuinely affordable Tesla EV — the Tesla Model A or Tesla mini car, specifically.

At the moment, the cheapest new Tesla is the Model 3 Standard Range Plus, ringing in at $44,990 before applying federal tax incentives. But the Tesla we really want to see is the mythical $25,000 supermini, the actual Tesla for the masses. And since we can’t wait for Musk to make up his mind, we conceptualized a Tesla mini car with all the unique quirks you expect from the most disruptive force in the auto industry since Henry Ford invented the assembly line. Don't want to miss a cleantech story? Sign up for daily news updates from CleanTechnica on email. Or follow us on Google News! Have a tip for CleanTechnica, want to advertise, or want to suggest a guest for our CleanTech Talk podcast? Contact us here.
In this article:Tesla, Tesla Model 2, Tesla Model A