I’ve written about Solarflux, its FOCUS parabolic dish, and its new tool, CASPER, which is a concentrating solar power (CSP) performance comparison tool. I’ve also had the pleasure of sitting down with Solarflux CEO Naoise Irwin and CTO John Fangman, who invented the FOCUS dish. This is the second part of that interview, this time talking about CASPER and how to use it, as well as a few other things.

In a nutshell, CASPER is a web-based tool that compares the energy collection and conversion efficiency of the Solarflux FOCUS parabolic dish concentrator with a widely used type of CSP. Naoise explained:

“It’s a tool that compares the output of our system versus parabolic trough, which is the other technology that I’ve talked about. What it’s intended to do is to highlight how much more energy you would get in an equivalent area with FOCUS.

“For example, in Phoenix, Arizona, which is a great place for concentrated solar energy because it has so much sun, you get about 30% more energy using our system versus the trough. So we’re just trying to find a simple way for people to compare.”

Naoise demonstrated CASPER and shared the comparison for Baton Rouge, which receives a similar amount of sun as Phoenix. I was a bit surprised seeing that, as we get plenty of rain here.

“It calculates how much energy you’re capturing throughout the year — for our system and for the trough — and it tells you what the difference is.”

Features Of The Focus Parabolic Dish

Naoise told me that the FOCUS parabolic dish had several unique features. It’s made of aluminum and steel, making it extremely recyclable.

“The fact that it’s made from aluminum and steel makes it recyclable and environmentally friendly, and this is something we really like about it. I love photovoltaics (PV), but one of the issues is what happens to all the PV when it gets to end of life? It needs to be recycled, processed.

“They’re made of silicon and all of this processing has gone into making these panels. So, they’re not that easy to take apart at the end of their life. So, they’re going to probably largely end up in landfills, unfortunately, unless a huge recycling strategy is developed. Kind of like what you’re seeing in EV batteries. You’re seeing a big push to find an effective way to recycle the materials. I really haven’t seen that much done on the PV panels, and this is a concern.”

Solarflux’s system is relatively low tech, Naoise explained. All of the intellectual property is in the design, and they are using environmentally friendly materials. Regarding the designs, there are special patented features unique to the system.

“All of our materials are environmentally friendly and we won’t have that problem of dumping toxic materials into landfills. We want to highlight that aspect and push the idea for people to try to develop PV recycling.”

In April 2021, the National Renewable Energy Laboratory (NREL) shared the analysis from a study that a team of NREL researchers has been doing. That study was on how to manage retiring PV modules in support of the laboratory’s vision for a circular economy for energy materials. The research looked at laws and literature on the topic and also conducted interviews with solar industry stakeholders, regulators, and policymakers.

This led to the publication of a series of NREL technical reports that narrow down options and opportunities for PV equipment reuse and recycling. The article NREL published noted that currently there’s little incentive for the private industry to invest in PV recycling, repair, or reuse due to current market conditions and regulatory barriers. You can read more about that here.

In the final report, which you can read here, the researchers noted that the projected volume of decommissioned PV modules in the US alone presented end-of-life management concerns but also material recovery and secondary market opportunities.

Solarflux CTO John Fangman also added that the current trend in product development is the circular economy. He added that several electronics companies are looking at what percentage of the process is recyclable.

Naoise feels that this is a concern for the industry as a whole even though Solarflux doesn’t have the issue.

The next step, Naoise said, was to develop consumer interest in the FOCUS parabolic dish. The next big goal is to raise capital while reducing costs.

“We want to move from making prototypes to making actual products that people can buy at a reasonable price. We have a plan for that and the next big step is to kick off that process and get to the point where we can supply these at high volume and low cost.”

Appreciate CleanTechnica’s originality and cleantech news coverage? Consider becoming a CleanTechnica Member, Supporter, Technician, or Ambassador — or a patron on Patreon. Don't want to miss a cleantech story? Sign up for daily news updates from CleanTechnica on email. Or follow us on Google News! Have a tip for CleanTechnica, want to advertise, or want to suggest a guest for our CleanTech Talk podcast? Contact us here.
In this article:Casper, parabolic concentrator, parabolic trough CSP, Parabolic Trough Solar Collectors, Solarflux In a new article by SolarFlux, CEO Naoise Irwin shares how solar thermal has massive yet under-appreciated decarbonization potential. Almost 6% of U.S. energy... 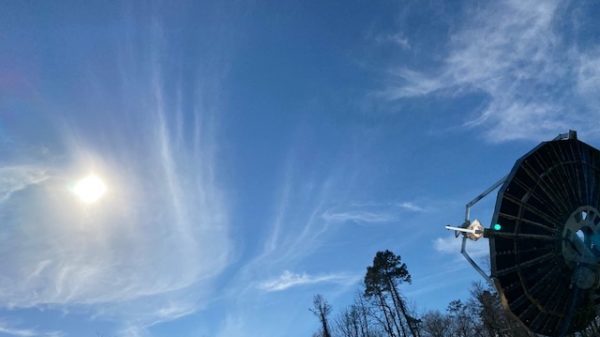 Solarflux: A Year Of FOCUS In The Field

Solarflux recently shared a twelve-month review of its FOCUS parabolic dish in operation. You may remember my interview with CEO Naoise Irwin last year... A few days ago I got to sit down with Solarflux CEO Naoise Irwin and CTO John Fangman, who is also the inventor of...