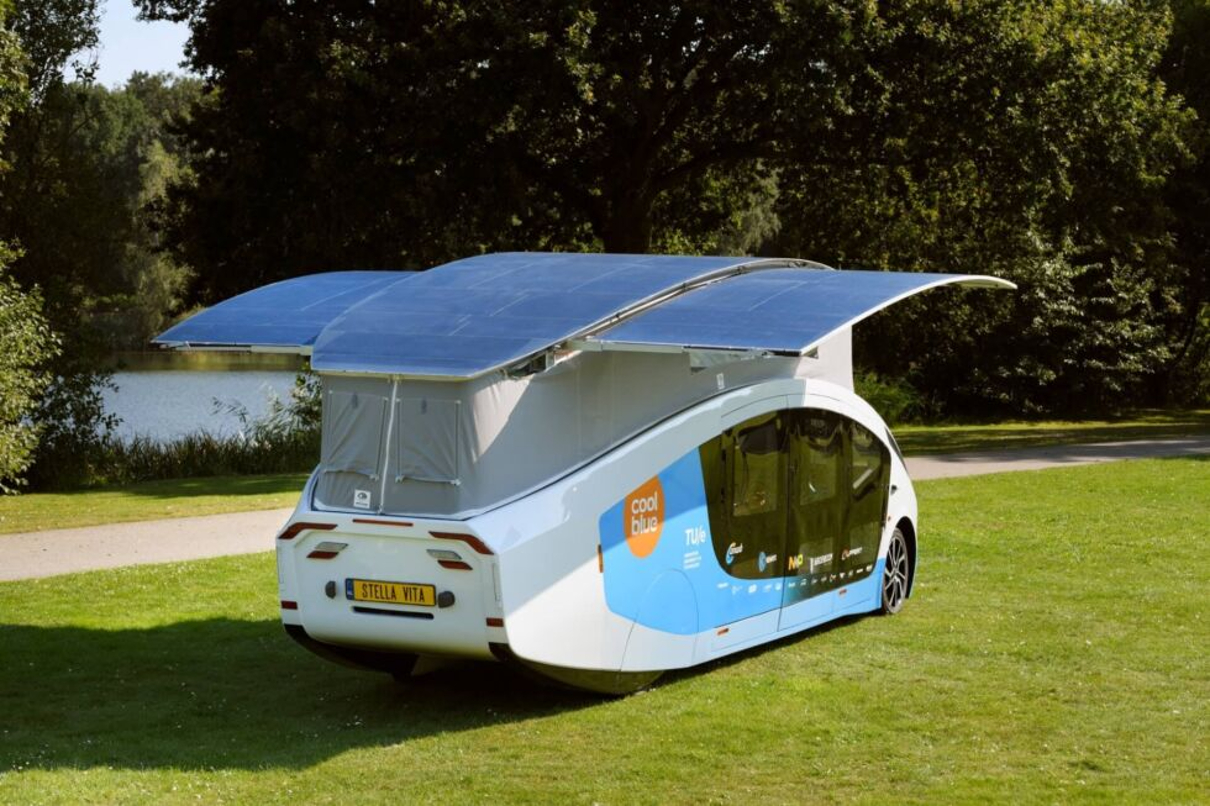 Eindhoven University of Technology in the Netherlands has a well deserved reputation for cultivating bright, inquisitive students. Their latest success is named Stella Vita (“star life,” if you remember your high school Latin), a tiny house on wheels powered entirely by the sun.

It is was built by the 22 members of Solar Team Eindhoven, who intend to drive their creation to the southermost tip of Spain — a distance of over 2000 kilometers — to spark interest in solar-powered vehicles. The team previously created a solar-powered family car called Stella Lux that was energy-positive. “She could power other electric vehicles because she had so much energy left,” team member Ter Horst told Ars Technica. The creators of the new “self-sustaining house on wheels” are hoping their strange-looking project will help spark interest in solar vehicles.

That Stella Lux project lead to the idea of a home on wheels powered entirely by sunlight. The team started building Stella Vita in March and completed it just a few weeks ago. It has the teardrop shape popular with most solar-powered vehicles because they have excellent aerodynamics.

It can travel up to 730 kilometers on a sunny day, assuming none of the amenities built in to the vehicle are put to use. Charging the batteries can take up to 3 days depending on the amount of sunshine available. Stella Vita has solar panels on its roof and two panels with more solar panels that are stored inside which are extended when parked.

Inside, travelers will find all the comforts of home, including a bed, a small fridge, a toilet, a couch, and a small cooking area. Everything runs on solar power, including an infotainment system that informs drivers of their energy consumption so they can make decisions about their usage. “You have to choose how you use your energy. You don’t have endless energy,” Ter Horst said. Stella Vita can also be charged at any EV charging station. To showcase its creation, Solar Team Eindhoven will begin to drive the vehicle 3,000 kilometers from Eindhoven to the southern tip of Spain starting next week. They plan to introduce their creation at various fairs and universities along the way during their 4-week road trip.

According to Ter Horst, the vehicle could theoretically reach the market in five years, though the team did not produce the prototype with the goal of mass production in mind. Horst said “We have the technology to make these kinds of automobiles but consumers will need to warm up to the idea” of teardrop shaped vehicles.

Other solar cars coming soon to market (someday) include the Lightyear One and the Sion from Sonos. You can even buy a solar car cover for your EV to soak up some electrons while parked. As flexible solar panel technology improves, it is likely charging with solar power will become more common. Who wouldn’t want to harvest some free electrons from the sun while driving?

Don't want to miss a cleantech story? Sign up for daily news updates from CleanTechnica on email. Or follow us on Google News! Have a tip for CleanTechnica, want to advertise, or want to suggest a guest for our CleanTech Talk podcast? Contact us here.
In this article:Courtesy of Eindhoven University of Technology, solar powered camper, Stella Vita

If you’ve been following my articles or my social media, you’ve probably seen me struggle to find the perfect RV. On the one hand,...