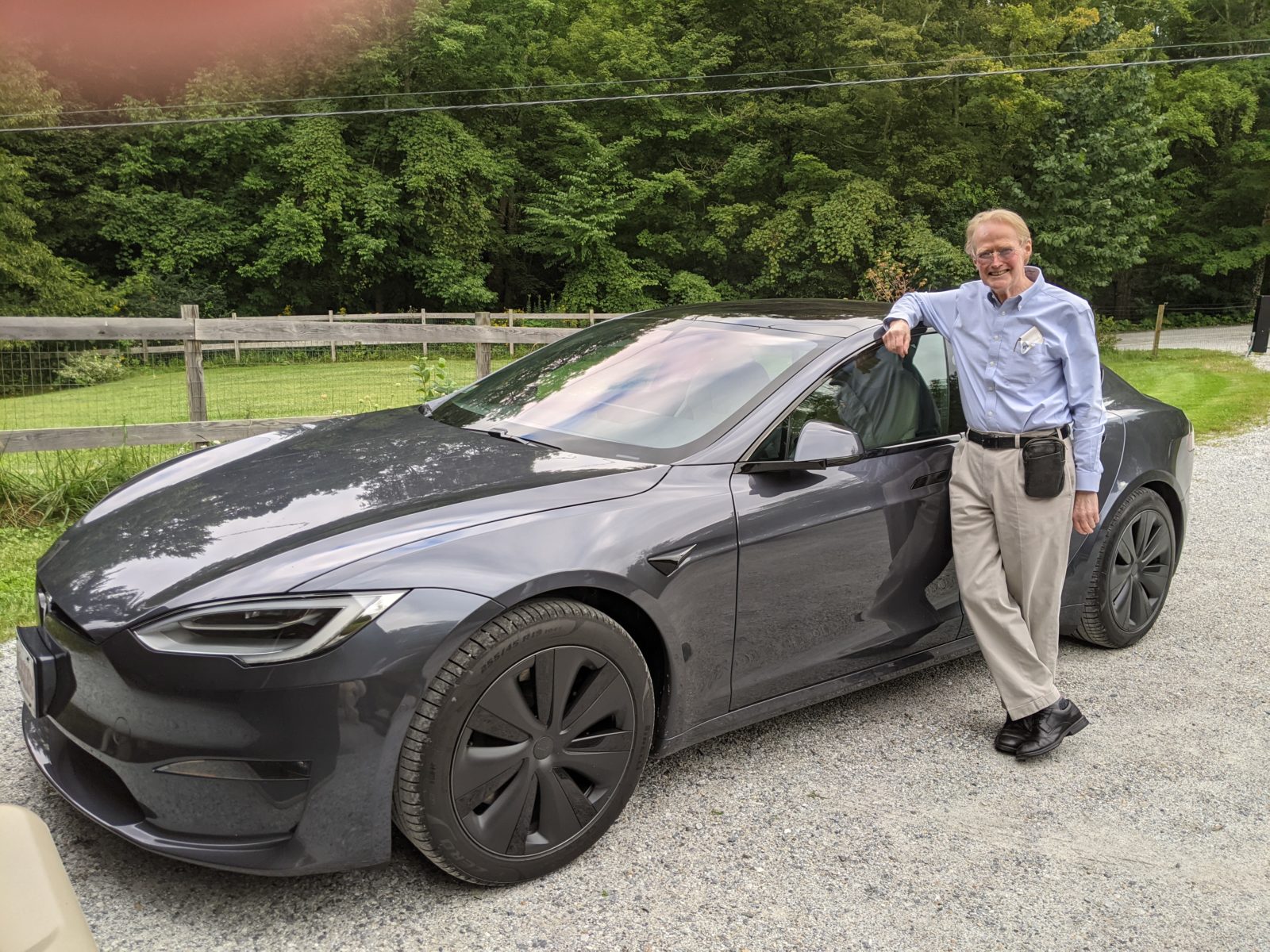 I recently took delivery of a 2021 Tesla Model S Plaid equipped with the Full Self-Driving (FSD) package, upgrading from my 2016 Model S (which I bought new). I sold my old Model S last May, and ordered the Plaid+ for the features and extended range. Unfortunately, Elon canceled that model, so I changed my order to a plain Model S. Then I was advised there would be a long wait for that model, so I changed my order back to the “plain” Plaid again, because I could get it several months sooner. Here is a rundown of my perceptions of my new Plaid and comparisons to my previous Model S.

Not paying attention to all the hype surrounding the yoke, I decided to keep an open mind, and just try it. I have found a couple instances where the yoke is a nuisance. As I was preparing to make a turn on a curvy Vermont road, I could not easily locate the buttons for the directionals. The yoke was not horizontal, so that was one of the few times in my life that I have screwed up a turn signal. Of course, as Musk says, “FSD will fix all of that.” (Pro tip: believe Elon! He may be late, but he delivers!)

Another nuisance is that I keep brushing the windshield wiper button as I diddle with the thumbwheel to adjust cruise control speed. Like the 2016 Model S, when I initiate Autosteer at low speed in town, it does not increase the speed when the speed limit goes back up. I am going to suggest to Tesla that they make the wiper button require a longer press, which would fix that.

Overall, the yoke is really a non-issue. Despite these few minor shortcomings, it is comfortable and allows great visibility of the screens.

About that “Plaid” Thing

The Plaid simply out-handles anything I have ever owned (including my Porsche Cayman and Panamera loaners). It feels like it is glued to the road because of the low center of gravity. The suspension is fabulous.

Speed is not my interest at this age (78), but I did pass once in a well-marked passing zone on my inaugural road trip from Boston to back-country Vermont. I did my usual by “flooring” the car without thinking. I don’t recommend this! This car is an absolute beast! Starting from about 45 mph, the acceleration surpassed anything I have experienced in my life. Before I returned to my lane, the car had rocketed to 104 mph! Suffice it to say that the car fussed at me and disabled Autosteer from that point on.

That was interesting. Apparently, the car determined I could not be trusted to use Autopilot responsibly, so it took it away! That was done with some forethought too, as I rebooted the computer to try to get it back to no avail. Obviously, the safety engineers at Tesla had thought of that. Hats off to whomever that was.

Senator Markey and the rest can fuss at Tesla all they want, but the folks at Fremont have put some serious thought into safety, more so than any other car manufacturer on the planet. I had to actually finish that “trip” and begin a new one to get my Autosteer privileges back! That is some impressive engineering!

“All of this will be fixed with FSD, maybe.”

Recognizing that “Autopilot” is designed to assist us, we must remain fully alert and ready to take control of the vehicle at all times. All this technology is fabulous for keeping us safe and providing early warnings in case we imperfect humans are distracted or otherwise less than 100% alert.

With Autosteer engaged, the car now warns me as I approach any traffic light. Regardless of color (green, red, yellow, or flashing yellow or red), it needlessly slows and I have to tap the accelerator to tell it to resume. I assume the introduction of the next level of FSD (beta) might fix this. Maybe. Still, it is using an abundance of caution, and I am all for staying on the safe side.

Autosteer works nearly all the time now. It will now even drive itself on a gravel road, and although I did not fully trust it, I can see why and how this was done in Musk’s push towards FSD. Autosteer is even better at reading raw unpainted pavement seams now. I am impressed with the improvement — it still feels like the car is on rails!

Approaching road construction on a back street (Walden Street by Walden Pond!), I let it go near some cones. One cone was lying on its side, and the car did just what I would have done, hugged the center line past the knocked over cone (but did not go over), then centered itself back in the lane when beyond it. It slowed itself down a little when it detected the cones on the roadside too, which was impressive.

The display is now showing me stop signs and stop lights, with their color, and brake lights on cars — although, strangely, not turn signals. I would be willing to bet that will be included before long.

Autosteer handled some amazingly complex and screwy lane overpainting as I entered the Concord rotary, and did them all correctly. I was pleasantly surprised, as they are clearly confusing to the eye and the contrast was awful. The way we humans handle it is by observing and interpreting the whole picture, and this hardware is clearly doing that. This is what Elon said it has to do. His comment was that “it should choose the safest option if a UFO landed in front of the car.”

Not to get too far ahead of myself, however, the hardware clearly is not perfect. It did not recognize and respond to a bicyclist as quickly as I would have liked it to, and I took control. This is the sort of thing that “Dojo” will analyze and feed back into the next software iteration, so Tesla’s drive towards continuous improvement will just make this type of interaction continuously better.

One thing this hardware does correctly that surprised me greatly is that around here, at most town boundaries, they have a speed limit sign, then it is immediately followed by a sign stating “25 mph townwide limit unless otherwise posted.” To my amazement, this version of hardware and software is getting this right, and not dropping back to 25 mph! I think this may be why we Tesla owners like the cars so much — they are not static. They keep improving with time. As my faculties degrade with old age, this car will continue to get better and better. Older drivers, take note! These cars are your salvation! This is a significant point that all the other car manufacturers have missed. They view updates as a means of making money. Elon has used this as a means to strive to be safer, and better. Owners sense this and like it. If the rest of the auto industry does not get on the ball, Tesla is going to own the whole show. Tesla has built a better vehicle. It just happens to be electric and can run off of power produced by our solar panels. The seats are the same as the upgrades in my 2016; no pain even after driving for hours (Sandy Munro first pointed this out). This is light years ahead of Mercedes and everybody else. It is amazing just how many improvements this guy with the teenage brain (hint: I love it!) has implemented in these cars.

Musk has put insulated glass in this version of the car, and again, to my amazement, it is quieter at 65 mph than my Mercedes S560! I think it is now at least as quiet as the Porsche Panameras that so impressed me when I had them as loaners. You can hear a pin drop at road speed now.

And, of course, it has the same sound system as my old Model S (I paid extra for that in 2016), which is so much better than what was in my 2019 Mercedes S560 that I am embarrassed for Mercedes. Total harmonic distortion is imperceptible, and there is zero perceptible crossover distortion, both of which were annoying to my ear in the Mercedes S560 “Burmester” sound system, the latter of which was just awful.

“Yeah, but Tesla is always late!”

How can Tesla be “late” when it is light years ahead of everybody else? Nobody has anything remotely like what you can get in a Tesla, electric or otherwise. Look, let’s face this squarely. Elon Musk has concepts and goals that he strives for. So he over-promises and falls short. So what. He is producing fabulous products that are continuously updated, better than anybody else has even thought about, and you can buy them right now (maybe with a waiting list now that more customers are catching on). Elon Musk has made more progress for us than I would ever even have conceived of 10 years ago. He is producing mobile widgets (“cars”) that are going to prolong safe driving for old people that are light years ahead of anybody else.

In hindsight, I probably would be happier with the plain Model S. I don’t need or even want all this power at my age. Sure, it’s fun, but also a little scary. The only real reason I got the Plaid was because it was available sooner. It probably would have been another six months, or longer, before I could get the regular S. I consider the extra money I paid for the Plaid version money well spent to support Elon’s mission of weaning humanity off of oil, so that is a good thing.

Seriously, I really have only one major complaint about the new car. My old energy usage display is markedly missing. Why is this a problem? Allow me to explain.

I am renowned for taking long road trips in my Tesla, sometimes way off the charging grid, and I want to recharge on my own terms, not some charging algorithm’s terms. To accomplish this, I continually monitored my energy usage and recalculated whether I was using more or less than expected (from drafting, headwinds, rain, etc.). With the energy usage display missing, I now have no way to judge how far I can stretch those electrons. It’s my own nit-picky foible, true, but I used it all the time, and its absence forces me to change my EV driving style — even WITH all that extra range in the Plaid model. This is a simple restoration of the old energy usage app that can be fixed with a software upgrade. Elon, if you are reading this, please bring it back.

So, in short, I love this car and can’t wait to become one of Tesla’s newest FSD “Beta drivers” when they release the update. I will keep you all posted.