In its 2020 Impact Report, Tesla says, “In 2020, Tesla customers helped accelerate the world’s transition to sustainable energy by avoiding 5.0 million metric tons of CO2e emissions.” The company’s focus is on more than building electric vehicles. Here’s what Tesla has to say about its mission:

“We are designing and manufacturing a complete energy and transportation ecosystem that is fully vertically integrated. By doing so, we are creating affordable products that work together to amplify their impact, leading to the greatest environmental benefit possible. We seek to achieve this through our research and software development efforts as well as through our continued drive to develop advanced manufacturing capabilities.” “We are designing and manufacturing a complete energy and transportation ecosystem. We not only develop the technology behind this ecosystem, but we also focus heavily on the affordability of our products that comprise it. We seek to achieve this through our R&D and software development efforts as well as through our continuous drive to develop advanced manufacturing capabilities. This is not only the right thing to do, but it also makes economic sense.”

“A Tesla battery pack is designed to outlast the vehicle itself,” Tesla says. “Because of this, few consumer Tesla batteries — even those from our nearly nine year old Model S cars — have been decommissioned to date. In preparation for the future, our battery factories have already begun implementing an in-house, closed loop recycling system that will ensure 100% of Tesla batteries received are recycled and up to 92% of their raw metals reused.”

Technologies developed by former Tesla CTO JB Straubel are being put to good use to recycle batteries at Tesla’s Gigafactory in Nevada. Not that all that many Tesla batteries are in need of recycling yet. Tesla says it cars have about 90% of their battery capacity left after 200,000 miles of driving. About Those Battery Fires

Lithium-ion batteries can catch fire under some circumstances. Anytime a Tesla is involved, it is headline news around the world. But according to Tesla’s latest Impact Report, the incidence of vehicle fires in its cars is 11 times less than it is for conventional cars. Note that Hyundai and General Motors have spent nearly $2 billion replacing batteries on a variety of electric cars, including the Chevy Bolt. Though, again, their battery fire rates are tremendously low compared to fires in fossil fuel vehicle powertrains. 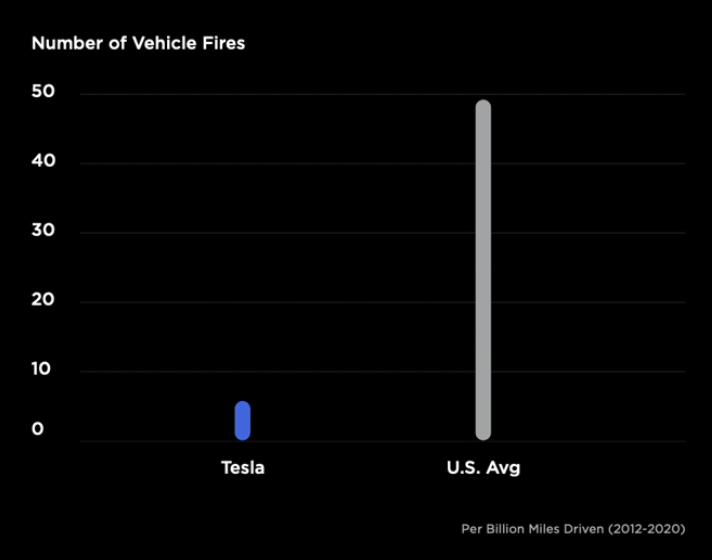 “We continue to improve our battery chemistry, cell structure, battery pack structure and vehicle passive safety in order to decrease fire risk to as close to zero as possible. In the rare instances where Tesla vehicles are involved in a fire, we provide detailed information to first responders so they can safely handle those emergency situations.”

There’s more to driving an electric car than scintillating acceleration. “A major benefit of EVs that is often overlooked is their lack of tailpipe emissions,” Tesla says. “Air pollution in the form of carbon monoxide, NOx, and fine particulates from burning fossil fuels causes over eight million premature deaths every year. EVs don’t just benefit the future of our planet — they also help address preventable deaths today.”

The transition to electric vehicles is necessary but not sufficient in and of itself to address the climate emergency that confronts us all. Lots of companies are thumping their chests and crowing about their “green” business practices. But Tesla is not only talking the talk, it is walking the walk as well, making sustainability the central focus of its business activities because it knows EVs are but one component of creating a sustainable world.

While other companies put out press releases touting their “green” credentials, Tesla is showing them all what it means to build a truly sustainable company.