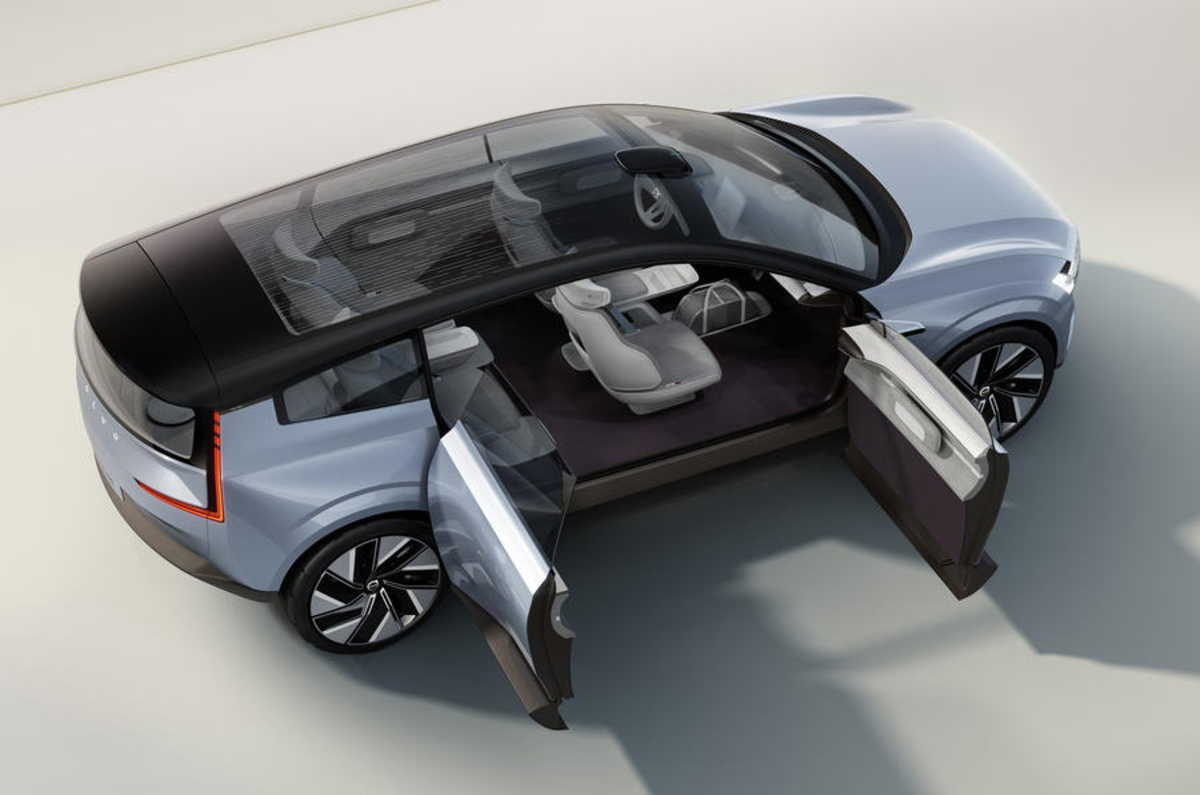 Volvo is pushing hard to stay up with the EV revolution. For those who don’t spend their days writing for online magazines like CleanTechnica, it’s easy to get confused about what Volvo Cars is doing and what Polestar is doing. Both are owned by Geely, which also owns the London Taxi Cab Company, something called Lynk & Company, Proton, and Lotus. Geely also manufactures its own line of cars. Volvo Cars and Volvo Trucks are two separate companies today, so it’s also important to distinguish them. For the purposes of this story, we will use “Volvo” to refer to the car business.

In a press release on June 30, Volvo unveiled its new Concept Recharge, the first EV from the company built on a dedicated electric car chassis. The current XC40 and C40 Volvo EVs are built on the company’s CMA chassis with is designed to accommodate combustion engine variants as well.

The Concept Recharge will replace the current XC90 in the company lineup and will have an actual model name, although the company is not ready to announce what it will call the car when it debuts next year. Not surprisingly, the car will be a close cousin of the upcoming Polestar 3 electric SUV that will be manufactured in South Carolina, Sweden, and China.

Volvo CEO Hakan Samuelsson tells Autocar, “It will be the new Volvo flagship SUV but it’s really the first of its kind and will be followed by a lot of cars based on the same architecture. We will mark that by deviating from the normal way of giving our cars names with XC for an SUV and so on. To mark that this next generation kind this car will also have a name, like a child.”

Head designer Robin Page says the production car will be “a manifesto for the all-electric future of Volvo Cars, as well as a new type of vehicle. It displays new and modern proportions that go hand in hand with increased versatility and shows what technology can enable in terms of design.”

Let’s take a look at the official photos of the Concept Recharge, courtesy of Volvo, before we get down to specifics. Aerodynamics are critical to electric car range. That squashed down profile that looks so much like an armored personal carrier is dictated by the need to make the car slippery as it moves through the air. Get used to it. This is what all future electric cars are going to look like, at least the ones that want to have more than 200 miles of range. In a separate press release, Volvo says the production version of the Concept Recharge will come with advanced sensors, including Lidar technology developed by Luminar and an autonomous driving computer powered by the NVIDIA DRIVE Orin system-on-a-chip as standard equipment.

“Volvo Cars is, and always has been, a leader in safety. It will now define the next level of car safety,” says Samuelsson. “By having this hardware as standard, we can continuously improve safety features over the air and introduce advanced autonomous drive systems, reinforcing our leadership in safety.”

The new safety features will reduce collisions while OTA updates will make them more sophisticated in the future and will be designed to specifically address those traffic situations which result in a large portion of the remaining severe injuries and fatalities found today.

“In our ambition to deliver ever safer cars, our long-term aim is to achieve zero collisions and avoid crashes altogether,” says Henrik Green, chief technology officer for Volvo. “As we improve our safety technology continuously through updates over the air, we expect collisions to become increasingly rare and hope to save more lives.”

Beyond the sensor suite and AI computing performance, Volvo’s forthcoming flagship model will also come with backup systems for key functions such as steering and braking that make it hardware ready for safe, unsupervised autonomous driving, once that feature becomes available.

By the end of this decade, the company plans to break the 1000 Wh/l energy density barrier, which will make it possible for its cars to achieve 1000 km (621 miles) of real world driving range. Current charging times are expected to be cut almost in half by the mid-decade, thanks to better battery technology and continuous improvements to software and fast charging technology.

“We want to constantly increase the customer benefits of driving a pure electric Volvo car,” says Henrik Green. “By simplifying the design and integration of our battery cells, we can reduce weight and maximise space, allowing for considerable improvements in battery capacity, range and charging times.” V2G and V2H technology will also be part of the mix.

The company also plans to make sustainability a central feature of its manufacturing process, from using electricity from renewable sources whenever possible to recycling the batteries used in its cars to reduce the environmental impact of obtaining raw materials.

“We want to offer our customers sustainable pure electric cars that makes their lives easier and more enjoyable,” adds Henrik Green. “Through smart innovation and collaboration with key partners, we can give customers what they want — more range, faster charging and lower costs — and further boost widespread adoption of electric mobility.”

A Word About The Interior Electric cars allow designers to rethink how to create interior space for passengers and their stuff. The Concept Recharge has a totally flat floor for more leg and foot room. The wheelbase is longer and the wheels themselves are pushed further toward the corners of the car as well. Forget the rear-hinged rear doors. Every concept car has them, but no production cars do. The dash features a 15-inch vertical touchscreen that enhances the traditional elements of Scandinavian design — clean lines and extensive use of sustainable and natural materials inside the cabin.

“Inside the Concept Recharge, we create a truly Scandinavian living room feeling,” says Robin Page. “The interior integrates our latest user experience technology with beautiful, sustainable and natural materials. Each part of the interior is like a piece of art and could stand alone as individual furniture in a room. We use the latest technologies but not for their own sake. We always focus on the benefits that technologies can bring.”

“With the Concept Recharge, we continue the rich roots of Volvo’s design DNA in a modern and fresh way as we move into our all-electric future. It represents everything we believe customers expect from a pure electric Volvo and we’re excited to take this philosophy into our next generation of cars.”