This is something we used to write about a lot more, but with all the new electric vehicles on the market and the fast EV growth, we now tend to focus much more on the cars than how they’re powered.

If you’ve got a house with a roof that is a good resting space for some solar panels, then go for it! Then you can drive on clean solar power and you can also easily explain to everyone — visuals included — how it is that you’re “driving on sunshine.” Naturally, if you’re a Tesla fan, you can even go with a Tesla vehicle and Tesla solar panels or a Tesla Solar Roof and have it all in one app/ecosystem. I do occasionally wonder how many households have that exact combo.

But not everyone can put solar panels on their roofs. In fact, most of us can’t. The good news as far as broadening the solar-powered EV market is that a lot more solar-powered EV charging stations will be getting installed across the United States via iSun.

The solar company recently announced that “it has been selected by competitive bid by two of the most important entities in the municipal EV fleet and off-grid charging networks. iSun will design and deploy several and grid-tied and off-grid solar powered electric-vehicle charging stations across America.” Unfortunately, it’s not clear at all how many solar panels, how much solar power capacity, or how many EV charging stations that entails. “Across America” sounds good, but how much of America? I’ll reach out to see if we can get more info. What we do know is that it’s a $2 million initial contract value to provide solar-powered EV charging at “National Forest trailheads and municipal fleet-charging sites across America.” Also, here’s a quote from iSun CEO Jeffrey Peck about the news:

“We are very proud that the iSun ROAM off-grid solution and the iSun PALM grid-tied system have been selected through a competitive bid process by such an esteemed group of e-mobility infrastructure partners. We look forward to growing these new relationships and to supporting the transition from dirty energy to clean energy across America. These recent wins also demonstrate the accretive value of the iSun Energy LLC acquisition in January 2021. We believe the iSun systems are the most advanced and reliable solar EV charging solutions in the world, due to the system scalability and modular design, on- or off-grid capability, high-quality aircraft grade aluminum materials, and intelligent software. iSun wants to create the best experience with reliable charging solutions, so electric vehicle drivers can go anywhere and do anything in their EVs.” 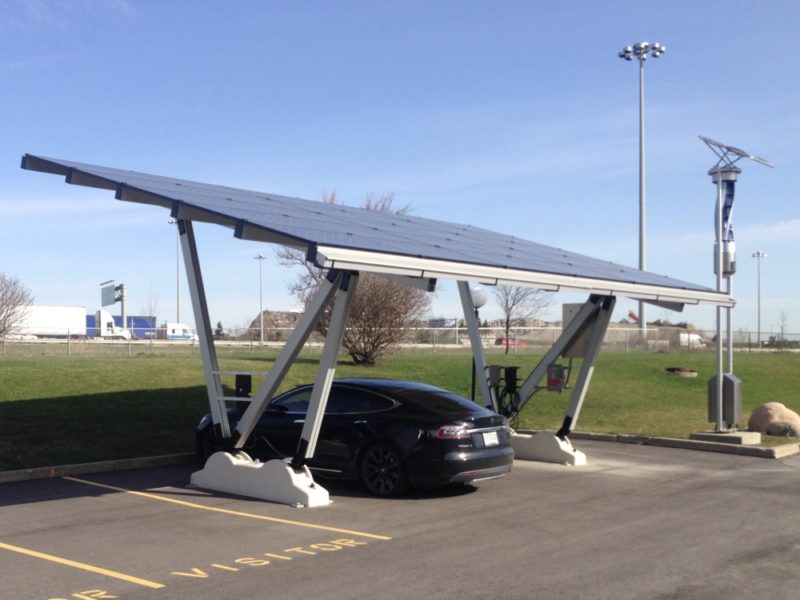 We do have some numbers on what iSun has done to date. The company claims to have installed more than 400 megawatts (MW) of solar power since 2012. That’s not the level of Sunrun or SolarCity/Tesla, but that’s actually quite a lot of solar power for a distributed solar power installer. It is across rooftop, EV solar carport, and ground-mount solar power systems. As the company adds, if that was just used to power homes, it could power about 76,000 American homes.

Additionally, iSun reports that it has an $81 million project backlog. Earlier this year, in January, iSun announced a $2.2 million contract with Meridian Housing Authority

All images courtesy of iSun.

Don't want to miss a cleantech story? Sign up for daily news updates from CleanTechnica on email. Or follow us on Google News! Have a tip for CleanTechnica, want to advertise, or want to suggest a guest for our CleanTech Talk podcast? Contact us here.
In this article:EV Charging Stations, iSun, solar carports, solar ev chargers What Is A Portable Solar Generator?

As seen on the recent series of The Block, the Linked Powerhouse “portable solar generator” is a combination of a RedEarth battery system, solar...