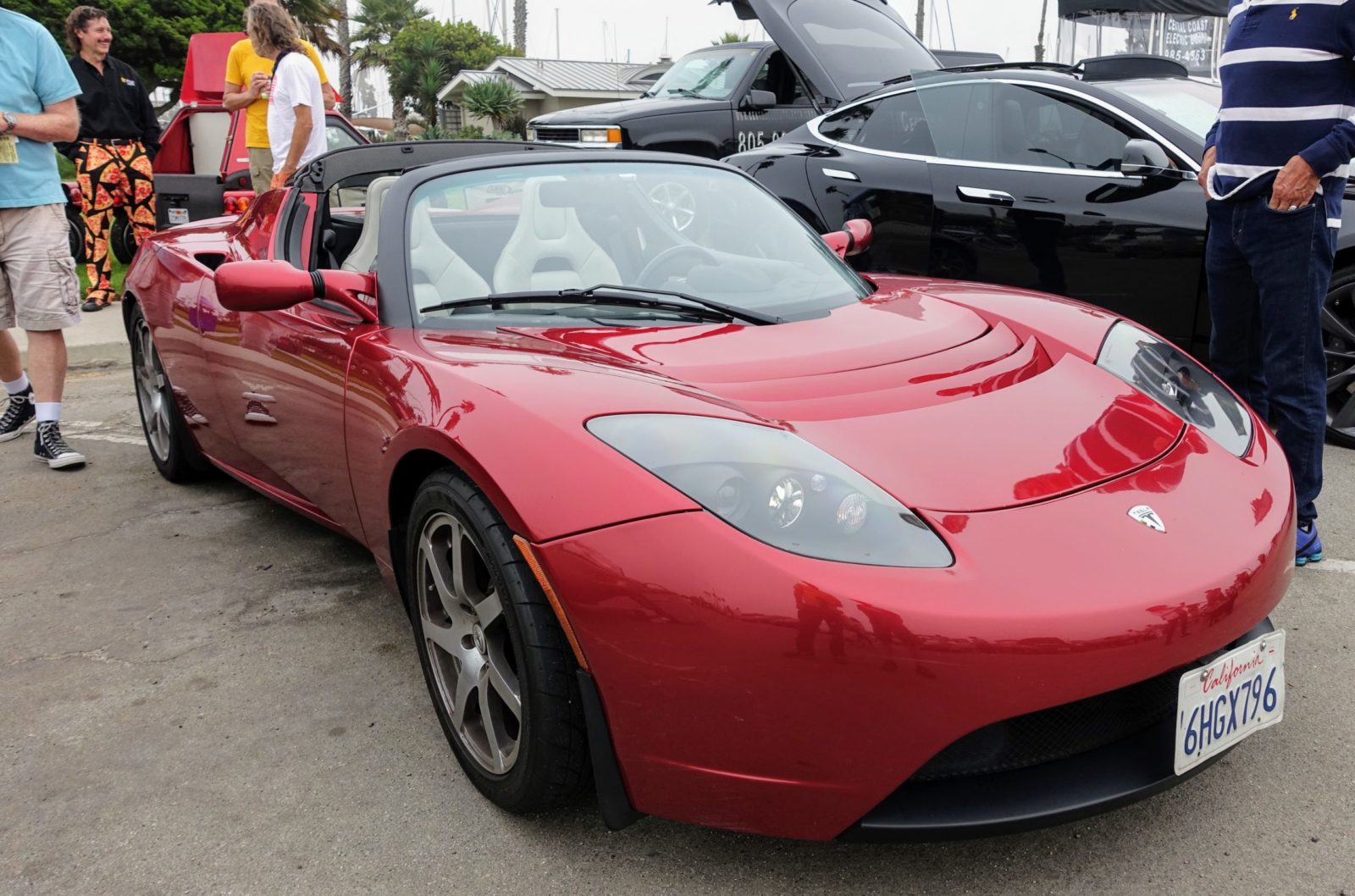 A gaggle of young EV companies, many of them heavily covered in the press during the recent spurt of SPAC activity, are vying to become “the next Tesla.” Some may succeed, but some will certainly fail (many already have, and a couple of recent headline-grabbers are currently circling the drain), but one thing is certain: none of them will be able to duplicate Tesla’s trajectory, because the rise of Tesla, like any historical event, was the product of a unique set of circumstances that no longer exists. A look back at the Tesla Roadster. Image: David Havasi & Maye Musk, standing in front of a Tesla Roadster at the NYC premiere of the film Revenge of the Electric Car on October 21, 2011

When Marc Tarpenning, Martin Eberhard and their merry men founded Tesla, they assumed that, once they produced a compelling electric car, and demonstrated that they could sell it, one or more of the major automakers would soon come knocking at their door, either to license their technology or to acquire the company. As Tarpenning told me in a 2013 interview, they were amazed that this never happened. (In fact, Daimler and Toyota both struck licensing deals with the young company, but both lost interest and cancelled the projects after a couple of years.)

During Tesla’s corporate adolescence, traditional automakers produced EVs, but these acquired the derogatory nickname “compliance cars” (John Voelcker is believed to have coined the term) when it became obvious that the companies would produce just enough units to satisfy government regulators, and had no interest in selling them in volume.

If automakers such as Daimler, Toyota, GM, Nissan and BMW had followed up on their early EV innovations, and put some substantial resources into tackling Tesla head-on, the history of the automobile might have turned out very differently. But they didn’t, and their inaction gave Tesla almost two decades to build its brand, perfect its technology, and establish a robust production capacity.

The startups that will be bringing their first vehicles to market this year will not benefit from any such grace period. When the Lucid Air luxury sedan goes on sale this fall, it will be compared not only to Tesla’s Model S, but to the Porsche Taycan, the new Mercedes EQS, and (in 2022) a lower-priced electric sedan from Hyundai. When Rivian and Lordstown put their electric pickup trucks on the street, they’ll be going up against an iconoclastic pickup from the world’s most popular EV brand (Tesla’s Cybertruck) and an electric version of the best-selling vehicle in US history (Ford’s F-150 Lightning).

Where Tesla faced no viable competition, these untested startups will be facing some of the most formidable competition imaginable. It’s not just about the vehicles themselves, but rather the companies behind the vehicles. Established automakers have huge advantages — existing factories and workforces, engineering expertise and massive marketing machines. What’s more, they can afford to lose a few billion if that’s what it takes to get their new models established. The startups can’t.

Yes, Big Auto had all these advantages back when Tesla was coming up, but the legacy brands didn’t choose to deploy them. As I explained in my response to the acquittal of the alleged “Tesla killers,” Audi, Jaguar and their ilk had plenty of opportunities, but no motive, and that’s why they were obviously not guilty of plotting automotive murder.

That has changed. Several of the world’s major auto brands have announced plans to go all-electric, and some are investing the cash to turn their words into action. The giants may have slept through the rise of Tesla, but they’re wide awake now. Camila Domonoske makes this point in a recent segment on NPR. “It’s very difficult to mass-produce a vehicle. Tesla, famously, had no shortage of struggles getting started,” she says. “However, Tesla had time to figure it out — the rest of the auto industry was skeptical that electric vehicles could be profitable, and Elon Musk’s company faced no real competition. That’s not the case for today’s start-ups, which are competing not just with Tesla but with auto giants like Ford, General Motors and Volkswagen.”

Ms. Domonoske focuses on the story of Lordstown Motors — a heart-warming tale of an obsolete auto factory brought back to life as a state-of-the-art EV plant. GM sold its Lordstown factory to the new company, which was spun off from commercial EV-builder Workhorse, in a sweetheart deal, and politicians did some ribbon-cutting and flag-waving as the cameras rolled.

More recently, Lordstown’s fortunes have faded as a string of negative news items came across the wires: allegations that the company had exaggerated the size of its order book (to be fair, these originated from a short-selling hedge fund, and should be taken with a healthy dose of salt); production delays; an ominous warning that the company was running out of cash; and most recently, the departure of two top executives.

Any or all of these events could prove to be temporary setbacks. However, what really caused investors to reassess Lordstown’s prospects was Ford’s unveiling of its F-150 Lightning. Everyone knew the electric Ford was in the pipeline, but as always, the question was whether the company was serious about it. Ford’s statements during and after the launch event, combined with the early success of the Mustang Mach-E, seem to indicate that Dearborn does indeed plan to produce the Lightning in volume — and Ford is more than capable of targeting the fleet buyers that Lordstown is hoping to win over.

Lordstown insists that things are still on track. “What’s not changing is our plan to start limited production in late September,” new Executive Chairwoman Angela Strand told the Automotive Press Association. “It’s a new day in Lordstown, and there are no disruptions — and will be no disruptions — to our day-to-day operations.”

Lordstown is just one of many hopeful automakers vying for a shot at glory. One recent article listed no less than 73 coins in the figurative fountain. Aptera, Arrival, Canoo, Faraday Future, Fisker, Lucid, Nikola, NIO, Rimac, Rivian, Xpeng … which one(s) will be favored by the fickle automotive gods?

“Through the next couple of years, the industry is going to start shaking the weak players out,” Jaime Perez, of brokerage R.F. Lafferty, told NPR. “And the market now may look drastically different from the market in a year or two.”