Here are three headlines about the Ford F-150 Lightning that appeared in the media this week:

Vox: The new Ford F-150 Lightning is not the electric vehicle we’ve been waiting for.

If we can learn anything from these headlines, it is that there is a lot of controversy and misinformation about electric vehicles swirling about because, for one reason or another, many industry actors have done a really poor job of educating consumers.

Bad information is everywhere. Just in the past week, I spoke with one person who said he would not buy a Tesla because it has the battery in the back and will burst into flames if hit from behind. Another person who deals with EV charging infrastructure was shocked when I told him the Tesla Cybertruck will not cost $200,000 but will start at around $40,000. Recently people have told me it takes 12 hours or more to charge an EV and that they cannot be driven through a puddle or plugged in if its raining. So much misinformation, so little time, to paraphrase Winston Churchill.

Vox is often a pretty good news source, one that I have used frequently as the basis of CleanTechnica stories. But this time, its griping is just tedious. Its F-150 Lightning story says, “To truly change the game and reach the mass market, electric vehicles need to much cheaper….[A]t nearly $40,000 for the base model and more than $90,000 for one that’s fully loaded, the [F-150 Lightning] is still far from the mass-market electric vehicle that’s needed to shrink the climate impacts of the auto industry and push gasoline and diesel off the road.”

Oh, really? Does Vox know the average price of a new pickup truck in America in 2019 was over $50,000? That information can be obtained easily on Google. Does Vox not have a half a second to get its facts straight? Nor does it bother to say the conventional F-150 can have a sticker price of more than $80,000. We’re not talking low budget commuter cars here. We’re talking pickups that can haul things and tow things. They ain’t cheap. Even used pickups can fetch prices of $30,000 or more in today’s overheated market.

The other thing Vox is blissfully unaware of is that the price of “mass market” cars is at an all time high. Yes, you can still buy a Hyundai Accent for $15,395, but that car is hardly a bestseller. The average sale price of new cars in America as of January, 2021 was more than $40,000. Used car prices are also sky high — $23,643 according to the Miami Herald. Americans don’t want cheap little commuter cars. They want big, hulking SUVs with room for 8 people, two mountain bikes, three kayaks, and a dog. Vox may have a point about how expensive private automobiles are today, but that’s not the fault of EVs.

The Washington Post article about the F-150 Lightning focuses on its ability to fight the culture war between conventional truck owners and electric vehicles.

“This is no pokey, jelly-bean-shaped car designed for tree huggers. Nor is it a spaceship-like ride for Bay Area tech bros. This is not a vehicle designed for virtue-signaling concerns about climate change, though it absolutely does broadcast the virtues of a bright, decarbonized, lower-pollution future.

“The Lightning will be a better, faster, more functional and more affordable truck that can appeal to red-staters and blue-collar workers. If produced and purchased at scale, trucks such as this one could revolutionize car culture and eventually shrink the country’s carbon footprint.”

The Post adds, “You would never know such technological innovation was possible, or pretty much inevitable, from the political rhetoric surrounding electric vehicles.” Republicans see Biden’s EV push as some sort of communist plot. They would prefer to tax electric cars out of existence to benefit the fossil fuel companies who contribute so heavily to their re-election campaigns. John Roberts and company have converted America into a checkbook democracy where public policy is determined solely by who can pay the largest bribes. If Vox is concerned about the high price of cars, it should be apoplectic about the far higher cost of politicians! 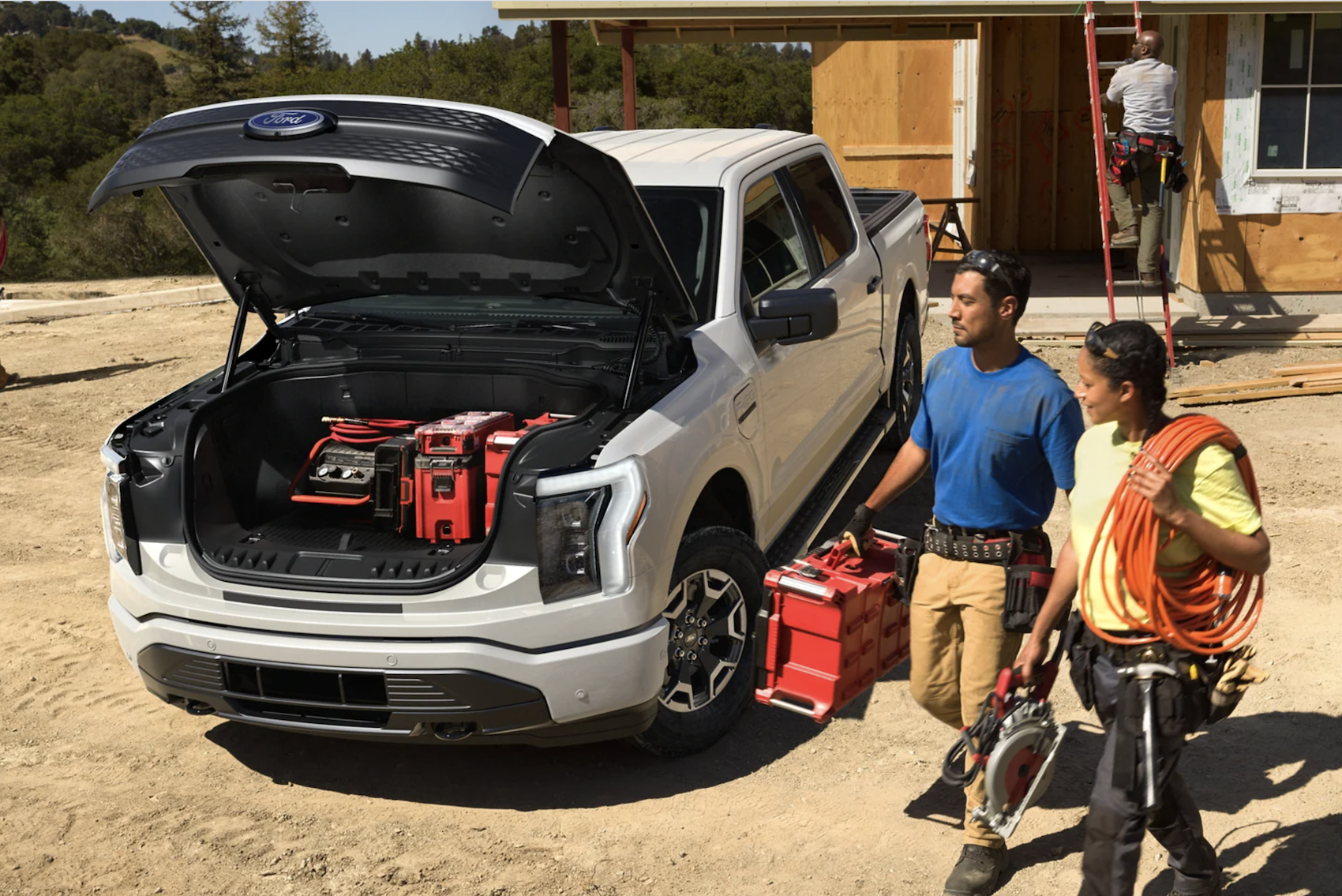 When it comes to assessing the impact of the F-150 Lightning, CNET Road Show comes closest to getting it right.

“When Ford’s F-150 Lightning goes on sale next year, this EV could single-handedly revolutionize not only the nascent all-electric pickup segment, it might just upend a significant portion of America’s truck market. That sounds hyperbolic, but here’s how: The Lightning promises loads of innovative features, impressive performance both on road and off, plus more capability than you’d probably ever expect from an EV. Just as importantly, it wraps it all in an inoffensive, decidedly familiar-looking package at a shockingly low price.”

The thing about the Lightning is how utterly normal it is in appearance. It has the same robust ladder frame and the same aluminum cab and cargo box as the conventional truck. Only the Super Crew cab with the 5.5-foot box will be offered. Why? Because that is the overwhelming choice of conventional F-150 buyers. If Ford wants to sell lots of these trucks, it needs to target the largest possible audience. The biggest difference between the conventional truck and the Lightning is the electric truck features an independent rear suspension — a first for full size American pickups.

The good news here is that a major global automaker has brought a compelling electric vehicle to the light truck segment. And don’t forget, the same company is also now offering all electric delivery vans as well. Trucks in general add more carbon emissions to the atmosphere than their numbers would suggest. Private passenger cars only get used an hour or two a day, but trucks tend to spend most of the day doing what they do best — working. Ford’s decision to electrify light trucks is a bold move. Looking back in a few years, the F-150 Lightning may be seen as the moment in time when the EV revolution began in earnest.

More than 44,500 reservations in less than 48 hours…and counting. The future is here: https://t.co/pbgGgnTVrS #F150Lightning pic.twitter.com/mpAztdfXZX

Don't want to miss a cleantech story? Sign up for daily news updates from CleanTechnica on email. Or follow us on Google News! Have a tip for CleanTechnica, want to advertise, or want to suggest a guest for our CleanTech Talk podcast? Contact us here.
In this article:DC fast charging, Dual Motor All-Wheel Drive, electric pickup, Ford, Ford F-150 Lightning