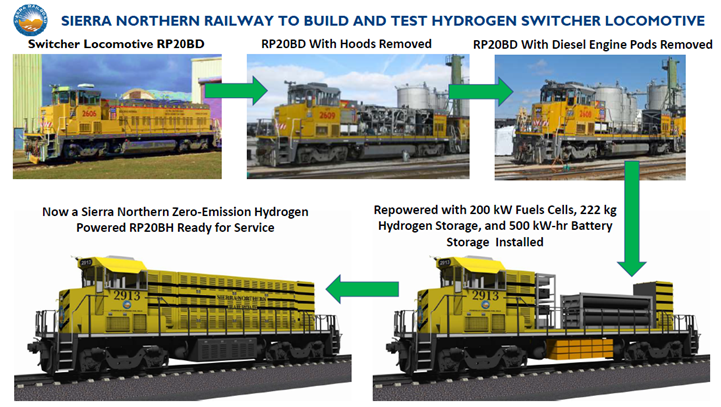 If all goes according to plan, the entire US locomotive fleet will switch over to diesel-killing hydrogen fuel cells and other non-diesel technologies (image courtesy of Sierra Northern Railway).

Dirty diesel fuel still holds a tight grip on the nation’s heavy duty transportation sector, but it looks like railway companies are finally poised to break free. In the latest development, Sierra Northern Railway just nailed a $4 million grant to build a zero emission switcher locomotive powered with a hydrogen fuel cell. If all goes according to plan, all 760 switcher and short-haul locomotives in the state could ditch diesel, and the switcheroo could ripple across the entire railroad industry. As for the hydrogen angle, that’s a whole ‘nother kettle of fish.

At first glance, converting switcher locomotives to zero emission hydrogen fuel cell technology doesn’t seem like it would make much difference. After all, switcher locomotives hardly go anywhere. They just go back and forth around the rail yard, hooking up railroad cars and unhooking them.

However, a typical switcher locomotive is in almost constant use, and those bits and pieces of miles add up.

If $4 million sounds like a lot to drop on one locomotive, it is. In fact, it’s not even paying for a new locomotive. However, $4 million is peanuts in the context of the overall plan, which is to decarbonize the nation’s railways.

The $4 million will go to convert an existing diesel locomotive into a high tech, zero emission beast that will pave the way for converting the entire US locomotive fleet.

In addition to the hydrogen fuel cell and storage systems, the hydrogen fuel cell locomotive will sport battery-type energy storage and advanced control systems. It will serve as a real world, real-time data collection platform to assess performance and cost, with an eye on rapid decarbonization “in the immediate future,” as Sierra Northern tells it.

To put the potential for scale in context, Sierra Northern operates on about 75 miles of track in California. Another leading US rail company, Norfolk Southern, claims 19,500 route miles in 22 states and District of Columbia under its belt, with 3,400 locomotives rolling on the rails.

What About The Hydrogen?

Yes, what about it. Hydrogen gets props as a zero emission fuel. When deployed in a fuel cell, it reacts with ambient air to generate electricity. Water is the only byproduct. However, shadowing the tailpipe is a long, dirty tail. Almost all of the hydrogen circulating the globe today is produced from fossil energy, mainly natural gas.

Fortunately for the planet, over the past year or so the renewable hydrogen market has exploded. The main pathway is electrolysis, in which an electrical current is applied to water, forcing out hydrogen. Add renewable energy for the electricity and you have a recipe for producing hydrogen practically anywhere in the world. One of those parts of the world is the US, where water, wind, and sunshine are all in abundance.

Wait, Not That Renewable Hydrogen!

The US also generates a lot of waste, and that is the key to another non-fossil hydrogen resource that could be in play for the Sierra Northern hydrogen fuel cell locomotive project.

Here, let’s have them explain it:

So let’s have Sierra Energy take over:

“The FastOx system uses heat, steam and oxygen to break down waste at the molecular level. Organic materials turn into an energy-dense syngas. Inorganics melt into a non-leaching stone and metals. Waste undergoes complete conversion into high value products with no emissions in the FastOx process. There are no toxic byproducts and no process emissions.”

Do tell! They sure squeeze a lot of juice out of that FastOx. Aside from hydrogen, the system can produce lower-emission syngas, sulfur-free diesel, and ammonia.

The Green Locomotive Of The Future

Speaking of free climate rides, the US railroad industry has been touting fuel efficiency with one hand, while reportedly stoking the climate change denial engine with the other. That’s not a shocker, considering how much coal, oil, and natural gas gets freighted around the country by rail.

However, it’s not a particularly good look. Railroad stakeholders will have to act fast if they want to compete for freight against zero emission trucks. The Energy Department recently put up $100 million towards long haul fuel cell truck R&D, on top of a considerable effort to push the market for next generation electric vehicle batteries.

It seems that the railroad industry is already stirring out of its diesel slumber, in the US and globally. In an interesting twist, one partner in the Sierra Northern hydrogen fuel cell project is the firm OptiFuel, which has hooked up with Cummins and BAE Systems with an eyeball on decarbonizing watercraft and microgrids as well as locomotives.

Last summer OptiFuel was putting the finishing touches on a $2.6 million Energy Department grant to demonstrate renewable natural gas on a 4,300 horsepower line haul locomotive, which would include both freight and passenger uses.

“The program will demonstrate that a suite of commercially available, EPA rail-certified engines present a near-term, low risk solution to create an affordable RNG hybrid line-haul locomotive with near zero emissions while simultaneously improving fuel cost by 50%,” OptiFuel explained.

OptiFuel is already taking orders for its modular RNG conversion system for existing switcher locomotives. It appears the company is aiming to scoot ahead of competition from battery-electric stakeholders.

“Powered by 100% RNG/Biomethane, the locomotives can have energy-weighted carbon intensity (CI) value ratings that are 200 to 300% lower than even a 100% battery-electric locomotive powered by renewable energy such as solar or wind,” says OptiFuel.

OptiFuel also makes the all-important bottom line case for its new locomotive. It ditches the conventional single-engine setup in favor of multiple engines, which the company estimates will cut fuel consumption by 20% to 40%.

In another interesting twist that circles back to that thing about competing with long haul trucks for freight, OptiFuel’s locomotive engine is a riff on the Cummins ISX12N, which is currently plying the highways in more than 12,000 class 8 trucks according to OptiFuel.

Rapid Decarbonization For US Railroads

In yet an even more interesting twist, OptiFuel is putting its new Energy Department grant to work at the Transportation Technology Center, which comes under the umbrella of the Association of American Railroads, which is the entity outed by The Atlantic a couple of years ago for funding climate change denial.

Well, that was then. Keep an eye on that Transportation Technology Center for a pivot into clean technology in the coming years. It is located in Pueblo, Colorado, which is the home state of the Energy Department’s National Renewable Energy Laboratory.

Just saying! More to the point, TTC is a federal lab, owned by the Federal Railroad Administration and operated by a wholly owned subsidiary the Association of American Railroads, the Transportation Technology Center, Inc..

“Through this extremely effective and impactful public-private partnership, the AAR and FRA have worked together at TTC for nearly four decades,” the Association of American Railroad enthuses, so hold on to your hats.

Don't want to miss a cleantech story? Sign up for daily news updates from CleanTechnica on email. Or follow us on Google News! Have a tip for CleanTechnica, want to advertise, or want to suggest a guest for our CleanTech Talk podcast? Contact us here.
In this article:BAE Systems, Cummins, Energy, green hydrogen, OptiFuel, Renewable Energy, renewable hydrogen, Sierra Northern Railway, US Department of Energy (DOE), usa