In a recent video by Jason at Engineering Explained, he tried to take an Volkswagen ID.4 on a road trip. He had hoped to prove that you don’t need a Tesla to go on a road trip anymore, but that ended up not being the case this time.

Before I go on, don’t forget to subscribe to Jason’s channel. He covers a variety of automotive topics, and his coverage of electric vehicles is fair, honest, and accurate. That’s a hard thing to find today, especially among people who still appreciate gas vehicles the way he does.

As a Volkswagen owner myself, it’s pretty disappointing how this video went. Jason started out trying to prove that vehicles other than a Tesla could make it on a road trip now. Electrify America’s network is most of what makes this theoretically possible, and the increased buildout of stations by other providers helps fill in the gaps in many areas. There are also now several coast-to-coast corridors that EVs with over 200 miles of rated range can take advantage of.

But that’s not how it turned out this time. “It’s a good idea from a design standpoint to have as few opportunities as possible for people to make mistakes,” he said in the video.

He pointed out that with Teslas and with the Mustang Mach-E, charging is a much simpler process. Just plug the charge cable into the vehicle, and it handles everything quickly and starts charging. Tesla does this because they build both the vehicles and the chargers, and for the Mach-E, Ford set things up so that it would work this way in most cases using FordPass. It’s the first vehicle model in the United States to use Plug&Charge technology. Those setups give very few opportunities for the driver to make a mistake and prevent charging. 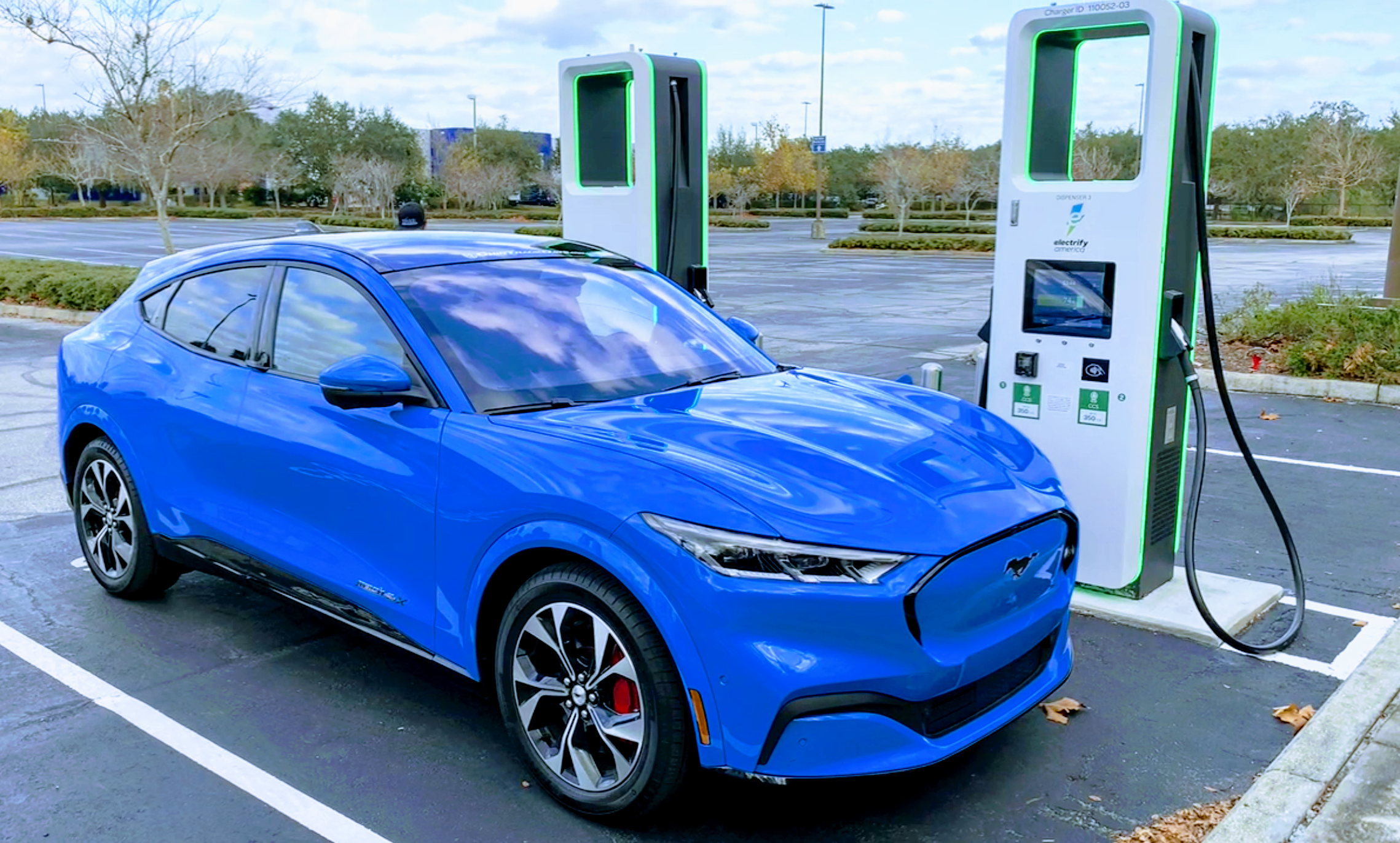 Keep in mind that Volkswagen owns Electrify America. It might not have built the network on its own (it was a court-assigned penance for the #Dieselgate scandal), but it’s still owned by the Volkswagen Group. A Volkswagen vehicle shouldn’t have problems when you plug it in at a Volkswagen-owned station, right?

Instead of plugging in and letting the process sort itself out, you have to plug it in, find the station site on the EA map, select the right station, and then the right cord (there are usually two per station), and only then can you get a charge. This isn’t an impossible process (I’ve done this in my Nissan LEAF at EA stations), but it’s got a lot of opportunity for users to make a mistake. One can choose the wrong station, wrong cord, or mess things up in other ways.

If an unnecessarily complicated process were the only problem, it wouldn’t be too bad, but that’s not where Jason’s troubles ended. In one case, he got an error on the station saying to unplug the car and try again, but the plug was locked and he couldn’t remove it. Inside the car, there was an error on the dash, but no obvious way to unlock the charger. It turned out that he had to press a button on the key fob to release the charging lock, but it took a phone call to figure this out.

Personally, I’ve experienced similar with my Nissan LEAF. When Electrify America was new, the station locked my vehicle to the station two times and I couldn’t stop the charge. The station’s operating system had crashed, and it took a phone call to release my car. Since then, things have worked much better (Electrify America has come a long way), but it’s disheartening to see a Volkswagen vehicle have these problems.

This also isn’t the first Volkswagen Group vehicle to have problems charging at EA stations. In another article, I went through the trials of taking a Porsche Taycan across the country. Out of Spec still managed to get across the country, but had several errors and failures along the way, including the navigation app’s inability to warm up the battery for maximum charging speeds.

The ID.4 had its own failures in this regard. The navigation app does understand that it needs to plan for charging along the way, and this puts it ahead of many early EVs that weren’t Teslas. However, it’s not very smart about choosing those stations. When Jason tried to plan a route, it didn’t recommend any chargers where it would get its max rate of 125 kW. Instead, it recommended two 50 kW chargers and even one level 2 charger where the driver would need to spend 10 hours to get enough charge to move on.

There were plenty of Electrify America stations, but the car didn’t know to use them instead of the slower (and much slower) chargers.

While experienced EV drivers will know that there are third-party apps that will come up with better routes (like A Better Route Planner), if someone buys an ID.4 and it’s their first EV, things are going to be hard for them. They won’t know the difference between the various speeds of level 3 charging, and they might not know that a 7.2 kW charger isn’t a good choice for anything but overnight charging. The vehicle will thus lead them astray and into major frustration and trouble.

Another issue with the ID.4 is a lack of one-pedal driving and no way to disable creep. Many people coming from gas-powered cars with automatic transmissions will find this setup familiar, but there should be an option to disable creep and enable one-pedal driving. Creep is inherently inferior, and is really a byproduct of gas car design compromises. Nobody should be stuck with it in an EV when there are much more pleasant alternatives.

Volkswagen says that later this year there will be a variety of fixes and updates that will address some of these issues, but they’ll be selling a car with issues (especially for new EV drivers) that will cause people problems. At worst, some drivers might want to return the vehicle when they think a 10 hour stop would be needed in Level 3-rich California.

The best time for Volkswagen to fix these issues was before offering them for sale. The second best time would be now. 6 or 8 months is too long.

Don't want to miss a cleantech story? Sign up for daily news updates from CleanTechnica on email. Or follow us on Google News! Have a tip for CleanTechnica, want to advertise, or want to suggest a guest for our CleanTech Talk podcast? Contact us here.
In this article:Electrify America, Engineering Explained, Volkswagen (VW), Volkswagen ID.4