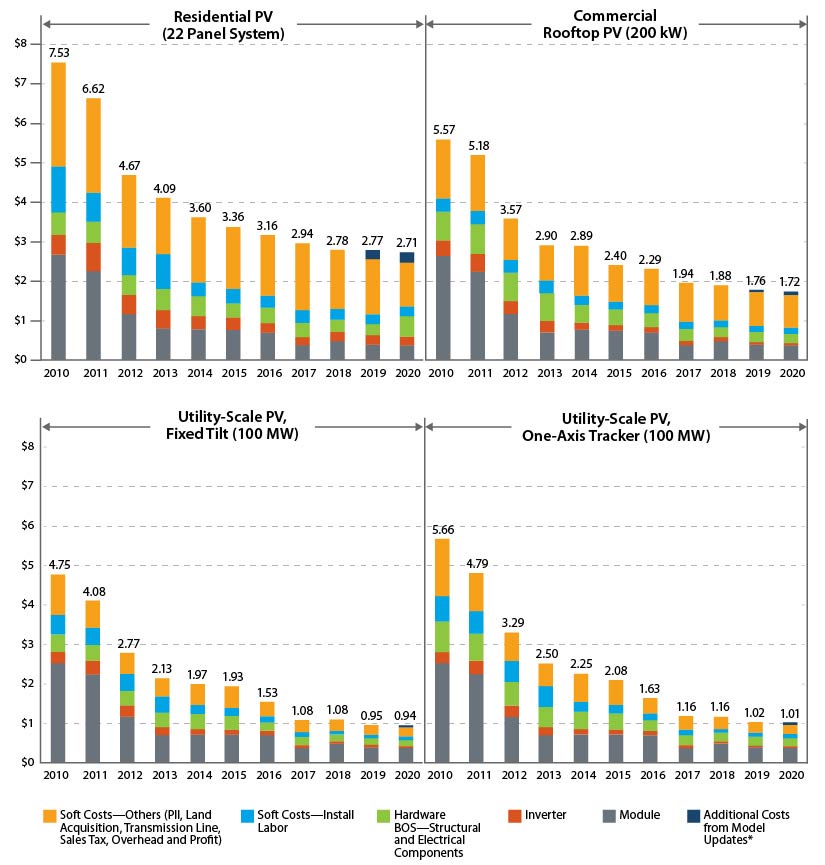 The cost of solar continues to decline across residential, commercial, and utility-scale PV systems, driven largely by increased module efficiency as well as lowered hardware and inverter costs.

The last decade has shown a sharp, though now steadying, decline in costs, driven largely by photovoltaic (PV) module efficiencies (now 19.5%, up from 19.2% in 2019) and hardware and inverter costs. Since 2010, there has been a 64%, 69%, and 82% reduction in the cost of residential, commercial-rooftop, and utility-scale PV systems, respectively. As in previous years, soft costs remain a large and persistent portion of installation costs, for both solar and storage systems, and especially for commercial and residential systems.

“A significant portion of the cost declines over the past decade can be attributed to an 85% cost decline in module price. A decade ago, the module alone cost around $2.50 per watt, and now an entire utility-scale PV system costs around $1 per watt,” said NREL Senior Financial Analyst David Feldman. “With similar reductions in hardware costs for storage systems, PV and storage have become vastly more affordable energy resources across the nation.”

Expanding Scope to PV Plus Storage

Additionally, NREL has calculated the levelized cost of solar-plus-storage (LCOSS), which tracks the total cost of operating a PV-plus-storage plant on a per-megawatt-hour basis. LCOSS was used to establish a 2020 benchmark of PV-plus-storage systems and will be useful for identifying future goals in the same way that the U.S. Department of Energy Solar Energy Technologies Office (SETO) has established PV price targets.

LCOSS for grid-coupled PV-plus-storage systems and levelized cost of energy (LCOE) for PV standalone systems, by market segment, Q1 2020. The graph shows prices for each with and without the federal investment tax credit (ITC) for solar installations.

In 2010, SETO announced unsubsidized PV price targets for 2020. Per this year’s benchmarking, residential and commercial systems are 93% and 97% toward achieving the 2020 targets of 10 cents per kilowatt-hour (kWh) and 8 cents/kWh, respectively. Utility systems, which met 2020 price targets three years early, are progressing towards SETO’s 2030 target for utility systems of 3 cents/kWh.

In pursuit of 2030 targets, the benchmark report notes that business innovations, partnerships, and continued R&D will be necessary to lower costs further. Although soft costs — such as labor, interconnection with the electric grid, profits, and overheard — often dominate current system costs, improvements in one area often affect others, such as high-efficiency modules reducing labor and material costs by requiring less products installed. Future cost reductions could be attained from a combination of improvements.

You can download the reportPDF, along with an accompanying slide deckPDF, and a public version of the underlying data set.

Register for the webinar here.

Appreciate CleanTechnica’s originality and cleantech news coverage? Consider becoming a CleanTechnica Member, Supporter, Technician, or Ambassador — or a patron on Patreon. Don't want to miss a cleantech story? Sign up for daily news updates from CleanTechnica on email. Or follow us on Google News! Have a tip for CleanTechnica, want to advertise, or want to suggest a guest for our CleanTech Talk podcast? Contact us here.
In this article:levelized cost of energy, National Renewable Energy Laboratory (NREL), NREL, US Solar Energy, us solar panel prices, US solar panels, US Solar Power, us solar power price, usa