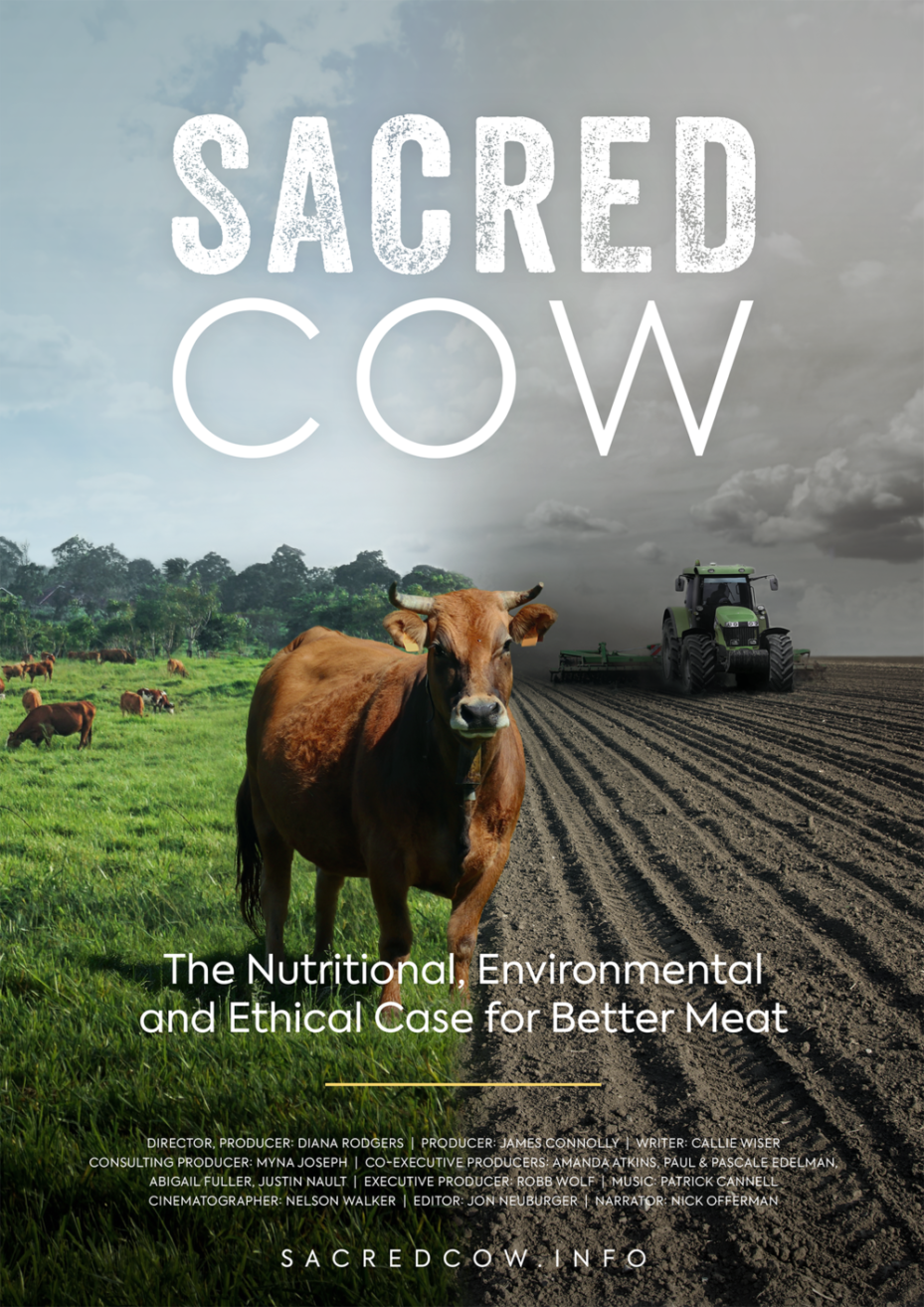 The documentary Sacred Cow was released in January 2021 and explores the ways that ruminants (cows) and well-raised meat can play an important role in solving our climate crisis (I’ll be interviewing director Diana Rodgers on a grasslands webinar in March). The film’s central argument is that the real threat to our climate and our health is industrially processed food, and that cows can play an important role in healthier, regenerative agricultural processes that produce better soil, better food and lower carbon emissions.

The documentary highlights and explores the many problems of industrial farming; the fact that many modern farms are vast, lifeless monocultures, where soil is continuously eroded (releasing massive amounts of CO2) and pumped full of fertilizers and chemical pesticides. It profiles the precarious nature of farmers who are caught in a lose-lose system where they are continuously dependent on expensive chemicals that are bad for both the environment and their pocketbooks. As one farmer says “I just want my farm not to be a black hole” that constantly loses money. The film sees solutions to many of these problems in a return to our ancestral practices of raising livestock and crops together and all the synergies and co-benefits that result from doing so.

Beyond The Controversy, A Chance To Work Together I’m sure the idea of “better” meat might be quite controversial to many of us. I’ve been a vegetarian for over 20 years and think that industrial meat raising is one of our greatest problems on the planet. The book Drawdown lists reducing meat intake as the 4th biggest way to bring down emissions of CO2 on our planet.

This film provides a fascinating counterpoint to the blanket argument that “meat=bad” and challenges us to think more broadly about the place of raising livestock in our world.

For one, the film agrees with the vegetarian and vegan community that industrial meat processing is horrendous on so many levels and transparently shows footage of the wrong ways to raise livestock. But at the same time, it also highlights the beneficial roles of livestock animals in farming ecosystems and laments that these relationships have been cast aside in the profit driven industrial and chemical farming of the last 50 years.

The film features farmers and ranchers who are practicing managed grazing techniques, where cows are moved in ways that mimic natural herds of ruminants on grasslands, and how this builds carbon in the soil as well as restores ecosystems. It profiles a rancher in Mexico who uses his herds of cattle to fight back against the desertification of his local landscape. There are few people more excited about “cow pies” than this man, who kneels down and shows the camera an upclose shot of cow dung and explains the cycle of seeds, moisture and nutrients that depend on grazing ruminants to keep the landscape healthy and alive.

Sacred Cow posits that vegetarians and advocates for better raised livestock and meat eating have a lot in common and should work together rather than against each other. Rather than focusing on our differences, vegetarians and carnivores should unite around the important work of raising crops and animals sustainably, supporting local farms, sequestering carbon in the soil, discouraging subsidies for unhealthy and addictive foods, etc.

And the film shows how sometimes we vegetarians throw the baby out with the bathwater in condemning all meat eating and in doing so lose a powerful ally in the cause of better agriculture. One poignant part of the film profiles the owners of a local butcher shop in Berkley, CA, who source their meat from local farms that are practicing sustainable livestock raising (which means taking care of their animals and helping the plants and soil at the same time).  This butcher shop becomes the target of massive protests by the animal rights movement who lay on the ground in cow costumes outside the doors and pour fake blood on each other. It’s hard not to cringe during scenes like that and think that this activist energy on display is misplaced.

The film is full of tough and challenging questions. Why protest local butcher shops and not  the much greater problem of industrial farming? Are the grains I’m eating as a vegetarian coming from lifeless, chemically dependent monocultures? Am I supporting local farmers in my food purchases like this butcher shop or am I sending my money off to industrial ag which is greatly damaging the planet? If highly engineered foods like the Impossible Burger are coming from industrial farming are they better for the environment than well raised meat?

The film is eye opening and challenges our preconceived ways of thinking. At certain points it did seem like director Diana Rodgers was ignoring her own advice of working together and hammering a little hard on the “vegans are wacko” theme. She gives a little too much time to a recovering vegan who, in my opinion, exaggerates about the drawbacks of veganism. She also picks a battle with Meatless Mondays in NYC schools, which seems like a small and silly hill to die on.

However, the overall message of the film is quite compelling. The 5-8% of Americans (myself included) who are vegetarian and the 92-95% of the country who eat meat can find a lot of common ground. We can and must work to make food more healthy and less addictive. We can stop, as the film says, “arguing about the wrong thing” and humanely raise animals to mimic natural cycles of ungulates on grasslands – restoring these landscapes, sequestering carbon and improving the lives of animals and farmers. We can turn our energy to the elephant in the room, big agriculture, and stop fighting each other about whether we eat meat or not. We can raise animals and plants in a much more holistic way and help solve our climate problems in the process.

You can stream this movie on Amazon here.

Also, we’ll be interviewing director Diana Rodgers during a webinar on grasslands in March as part of a week devoted to carbon sequestration. It took 4 years for JUST Egg to find the right ingredients. It turns out the secret was in the mung bean.