A new report from the Institute for Local Self-Reliance shows that America’s monopoly problem is bigger than you might think.

While last year’s Big Tech hearings and House antitrust report spotlighted monopoly abuses at Amazon, Google, and other tech giants, the report from ILSR makes clear that America’s monopoly problem has spread into many other sectors of the economy — including the electricity sector.

The report is the latest in a series from ILSR focused on fighting monopoly power throughout several sectors of our economy, including Banking, Broadband, Food and Farming, Pharmacy, Waste and Recycling, and Small Business. 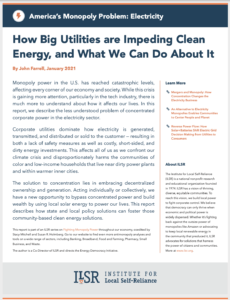 The report explores how corporate concentration in the energy and electricity sectors is a serious problem that impacts nearly all Americans and contributes to a range of economic and environmental burdens.

Americans collectively spend $360 billion per year on electricity, with the vast majority of those dollars going to a small number of corporate utilities that control how America’s electricity is generated, transmitted, and distributed.

As the report makes clear, the structure of today’s electricity market stands in the way of progress in providing Americans with clean, safe, and cost-effective electricity we need to combat climate change — and, unfortunately, the problem is only getting worse. Over the last two decades, mergers have placed unprecedented economic and political power in the hands of a small number of corporate electricity companies — resulting in bloated returns for shareholders and underinvestment in energy efficiency, renewable energy, and resilient energy systems for the rest of us

Called “How Big Utilities Are Impeding Clean Energy, and What We Can Do About It,” the report does more than explore the problem of monopoly control of the energy sector — it also explains how we got here, and how we can address the problem. It lays out three key principles that could stop the power grab of electric utilities and help build a cleaner, more efficient, and affordable electricity system:

Don't want to miss a cleantech story? Sign up for daily news updates from CleanTechnica on email. Or follow us on Google News! Have a tip for CleanTechnica, want to advertise, or want to suggest a guest for our CleanTech Talk podcast? Contact us here.
In this article:distributed generation, Institute for Local Self Reliance, John Farrell