At long last, I reconnected with David Havasi to restart our Tesla Inside Out series. David first interviewed with Tesla in November 2010 and joined the team in mid-2012, just in time for the Model S launch. He worked at Tesla in various rolls until mid-2019, when he basically retired thanks to his early role at Tesla and all the stock options that came with that. David and I live near each other, but we have been obsessively quarantining for many months (like most of you).

The full interview is above, or the audio can soon be listened to on Anchor, Apple Podcasts/iTunes, Breaker, Google Podcasts, Overcast, Pocket, Podbean, Radio Public, SoundCloud, Spotify, or Stitcher. Below are some of the highlights in text, starting with David’s explanation of how he lured people in back in the earliest sales days, even before they had Tesla stores.

“I wasn’t in a building. It was more like a UFO landing. I’d just kinda be somewhere, and people would walk by and experience it. So it was more like it kind of jarred their senses, where they were seeing this thing they had never seen before and never heard of before,” he started.

“When I was sitting in the frunk, I call it the frammock, where you use the front truck as a hammock — back then, before it was dual motor, when it was just their rear-motor powertrain, the frunk was a little bigger — it was kind of like a tub. So I was able to sit with my legs hanging out; I’d have my laptop or iPad, and just chill out until people came over and I’d have a conversation with them. That was kind of the hook or the lure, the bait.

“And then I’d have the door open as well, so people would see the touchscreen. So it was sort of this bidirectional lure.”

One way or another, David’s aim was to hook people with one of Tesla’s most shocking novelties — the touchscreen or the frunk.

“When you see a person sitting in a sedan, in the hood of the front of the sedan, that’s already really jarring because … ‘Well, then, where’s the motor? It has to be in the trunk.’ And then you’d look in the hatch, and I’d pop the hatch, and of course it’s cavernous and more storage than a Honda Odyssey minivan. And then they’d be like, ‘Oh, well, is it in this drop floor?’ And then I’d pull that little trap floor and then that’s more storage. And then their minds, like, you saw them trying to calculate what they’re seeing. And then they thought it was like maybe a dummy car, like a rolling chassis or something. And then you’d tell them the motor’s like the size of a pumpkin, the size of a paint can.

“A wise man once said, ‘We only have access to the content of our own minds.’ When new content, when something new enters that we have no reference point similar to that, it’s really weird to process. Back then, you had this, it was this UFO situation: ‘How — I don’t get — how is this possible?'”

Those quotes were from the first 5½ minutes of this nearly 50 minute interview. He then talked about the transition from those early Model S shoppers to the Model 3 age and the buyers who came in at that time. Notable, of course, was that many of the Model 3 buyers were in fact earlier Model S shoppers who were coming back years later. 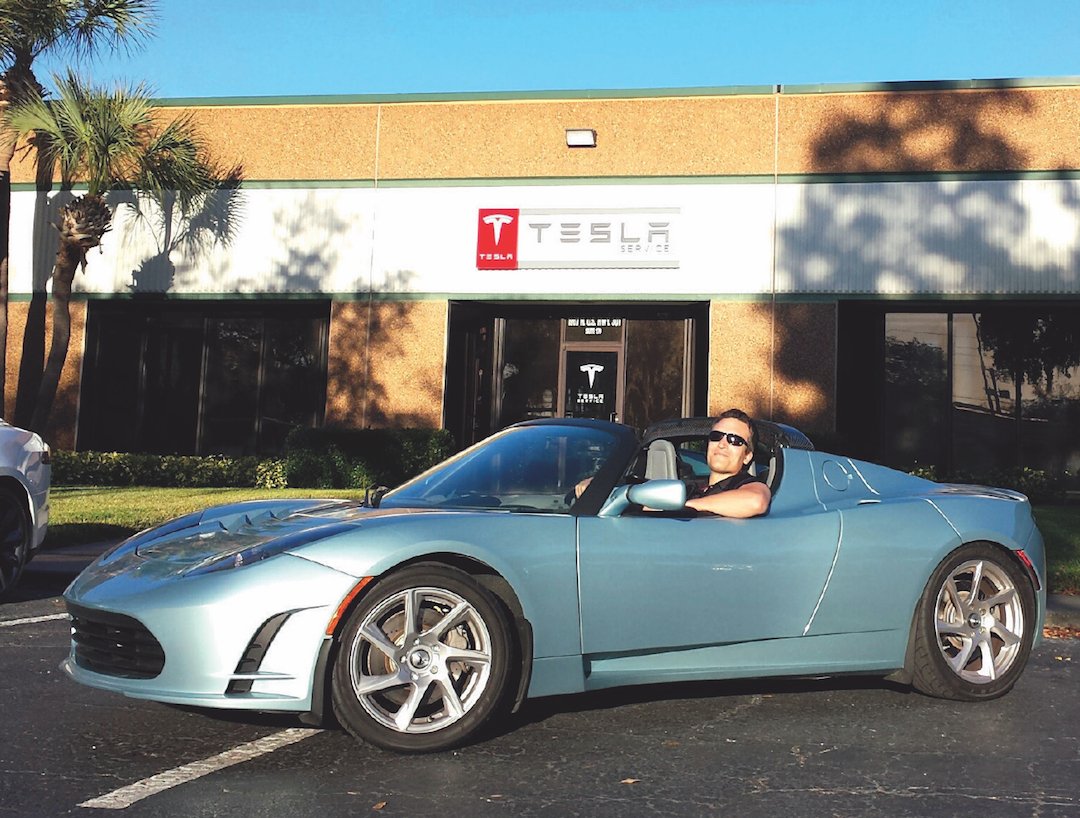 David also talked about using the original Tesla Roadster, even long after it was available to buy, for marketing purposes, particularly when they were out of Model S demo cars.

We also talked about the possibility of many or even most people still not realizing or noticing Teslas all over our area — despite David and I counting a dozen or so Teslas on many drives and routinely seeing multiple Teslas at an intersection. There’s an open question of how long it takes for the average person to take notice of the automaker’s growth and its increasingly mass-market presence.

David also rolled through the fun of using Summon inside the mall to freak out the Apple salespeople and using Smart Summon for the first time in the parking lot of a local grocery store and watching peoples brains almost explode on the street.

There’s much more in the video, so go ahead and watch it if you enjoy this kind of discussion. We also touch on the Ford Mustang Mach-E briefly and our enthusiasm for the new electric crossover. Neither of us have driven it yet, but we’re working on a plan for a special episode in which we test drive one together and see if it lives up to our dreams and excitement for the new electric entry.

Don't want to miss a cleantech story? Sign up for daily news updates from CleanTechnica on email. Or follow us on Google News! Have a tip for CleanTechnica, want to advertise, or want to suggest a guest for our CleanTech Talk podcast? Contact us here.
In this article:David Havasi, Tesla, Tesla history, Tesla Inside Out, Tesla Model 3, Tesla Model S, Tesla sales