After years of corruption, cost overruns, and delays, Venice has finally unveiled its long-awaited flood control system. It can stop today’s high tides, but can it stand up to climate change?

After years of corruption, cost overruns, and delays, Venice has finally unveiled its long-awaited flood control system. It can stop today’s high tides, but can it stand up to climate change?

Venice has struggled against flooding since the 5th century, but this year it was protected from a high tide by a sea barrier called MOSE.

“Today, everything is dry,” Venice Mayor Luigi Brugnaro said. “We stopped the sea.”

The wind was stirring up the sea around Venice, Italy, threatening a high tide of more than 4 feet. Normally, that would be enough to inundate half the city, leaving tourists to trudge through knee-high floodwater in St. Mark’s Square. But this wasn’t a normal day.

On this rainy Saturday in early October, for the first time, officials would make use of MOSE, a system of movable sea barriers built to protect Venice against floods.

Venice sits in the middle of an enclosed bay with only three entrances. To guard those entrances, engineers came up with MOSE, which stands for “Modulo Sperimentale Elettromeccanico,” or “Electromechanical Experimental Module” in English. MOSE, incidentally, is also the Italian word for “Moses,” the biblical figure who parted the Red Sea.

The system consists of 78 panels that lie flat on the seafloor. At 8:30 am on October 3, those panels filled with air, causing them to swing upright like cellar doors being thrown open. Shortly thereafter, the Venice Lagoon was separated from the Adriatic sea by three bright yellow sea walls.

At noon, St. Mark’s Square, which was expected to be under more than a foot of water, was dry. Venice, which has struggled against “acqua alta” — literally “high water” — since the 5th century, was finally protected from a high tide. 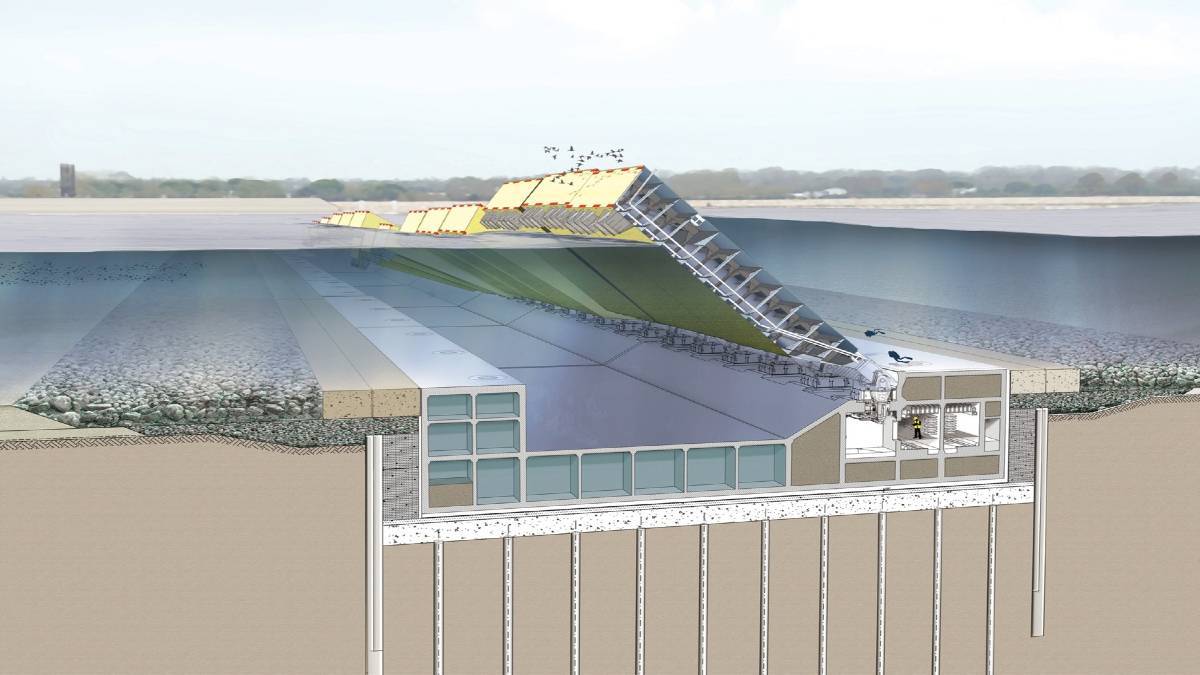 An illustration of MOSE in operation. Credit: Technital

The success of MOSE was never guaranteed. The flood control system belongs to a species of infrastructure project that is marred by corruption, cost overruns, and delays. In 2014, investigations led to the arrest of dozens of politicians and business leaders who had given or taken tens of millions of euros in bribes in association with the project. And MOSE still isn’t finished. Work will continue until the end of 2021, the conclusion of a decades-long effort to shield Venice against the sea.

Floods have always afflicted Venice, but they grew more severe over the 20th century. As people drew down reserves of freshwater buried under the city, it began to sink. It dropped by one foot, leaving it even more vulnerable to high tides. In 1966, a record-setting surge of more than 6 feet hit Venice. It destroyed shops, damaged libraries, ruined priceless works of art and displaced 4,000 people. The storm prompted the Italian government to find a way to protect the city and, in 1973, Venice’s preservation was declared a matter of national interest.

Venetians have engineered their surroundings for ages, fortifying canals and building up islands. To tackle malaria in the 16th century, they reclaimed marshy areas around the lagoon where disease-carrying mosquitoes thrived. But engineering a sea barrier presented a particular challenge.

Officials needed to keep the tide at bay, but they also wanted to avoid building any large, unsightly sea walls, both to preserve the beauty of the city and to allow sea creatures to move in and out of the lagoon. In 1975, they solicited proposals for such a project, but none met all of the requirements.

A few years later, a group of researchers merged five of these proposals into a new concept — a set of movable gates that would remain hidden from view when not being used. In the early 1980s, the firm Technital began work on this concept. While the composite design looked simple enough on the drawing board, it proved difficult to engineer.

Metals corrode in saltwater, so MOSE had to be made with interchangeable parts that could be replaced later on. The gates also needed to open and close fast in response to rapidly changing weather conditions. Sea walls usually take days to prepare and several hours to close. Technital aimed to shrink this window to just half an hour, allowing the gates to quickly fill with air when needed and then refill with water after a high tide had receded. “We learned so many skills [engineer, oceanographer, materials scientist] that we were only missing a priest,” said Alberto Scotti, head of Technital. It took years to refine the design, test the prototypes, and get final approval on the project. Construction did not begin until 2003.

Two decades later, they are still working out the kinks in the system. Officials recently declined to activate MOSE because the forecast promised a manageable tide. The tide ended up being significantly higher than expected, and it flooded St. Mark’s Square.

Scotti has compared MOSE to a Ferrari, a finely-tuned jewel of Italian engineering. And like a Ferrari, MOSE came with a hefty price tag. Its final cost is estimated at close to €6 billion, some €4 billion over budget, and that does not include the additional cost of maintenance.

Worryingly, MOSE could be made obsolete by climate change. In the most pessimistic climate scenario, where emissions go unchecked, sea levels could rise by more than 8 feet by the end of this century, more than enough to overwhelm MOSE.

Even modest sea level rise could do damage to the Venice Lagoon. Higher water levels will force the city to raise MOSE regularly. If the barriers stay up constantly, they will block the flow of sediments that sweep in from the sea and replenish the wetlands, according to Giovanni Seminara, a professor of engineering at Università di Genova.

In the age of climate change, Venice may have little choice. Cities around the world are taking similar steps to protect against sea level rise. London has built a retractable barrier on the Thames, and Holland has erected a storm surge barrier to guard low-lying areas. New York City is considering something similar.

The Army Corps of Engineers studied MOSE when investigating how to build a seawall to protect New York from mega-storms like Hurricane Sandy. As in Venice, the seafloor around New York is deep enough to accommodate large moveable gates, Scotti said.

The city is primed for a MOSE-like barrier, but, given all the challenges that Venice faced in engineering and construction, New York should be warned, Scotti said, “It’s not easy to get it right.”

Don't want to miss a cleantech story? Sign up for daily news updates from CleanTechnica on email. Or follow us on Google News! Have a tip for CleanTechnica, want to advertise, or want to suggest a guest for our CleanTech Talk podcast? Contact us here.
In this article:Europe, flood control, flooding, floods, Italy, Venice