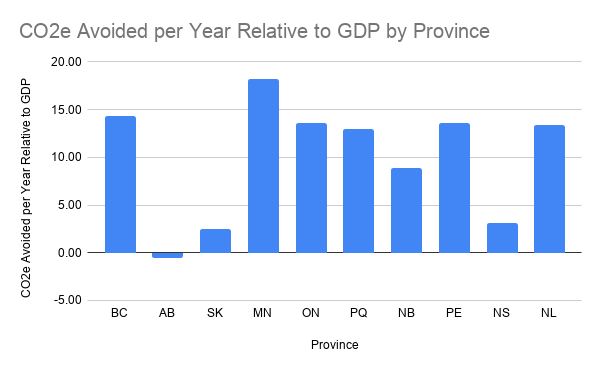 First, a mea culpa. I got something wrong. A couple of weeks ago I published a piece which analyzed the amazing value that we could get if we simply replaced gas furnaces and air conditioning in the worst 10% of commercial buildings. I found that Canada could save “1.9 megatonnes of CO2e per year, and about 38 megatonnes over 20 years.”

Well, I missed one multiplication factor in one cell. The actual numbers are are 2.1 megatonnes and 42 megatonnes. Yeah, the results are actually 10% better than I had published. I feel so terrible.

I discovered this in the aftermath of conversations about the model with my frequent collaborator Blair Birdsell, co-author with me on the article Adventures in Municipal Data Science. We’re talking about using the model of building emissions savings I created and extending it to both large scale municipal data sets and how we can synthesize initial data sets to play with the machine learning side of things.

That led to a discussion of how the model would have to be varied by Canadian province, as each province has greater or lesser building energy use profiles, depending on climate and historical efficiency programs, and different grid CO2e per kWh emissions. That last one turned out to be a real kicker. Before doing the work, it wasn’t clear to me how the combination would come together, but in retrospect, it should have been obvious.

As a reminder, this variant still operates off of the median 5,000 square foot / 464 square meter commercial building. There are about 50,000 of them in Canada in that range. However, some provinces have a lot more of them and some a lot less. The method I used to derive provincial numbers was to used GDP in Canadian dollars as a proxy for likely building numbers, dividing the provincial GDP by the federal GDP then using the result to carve out a slice of the 50,000 buildings. With the $2.2 trillion CAD for Canada then, BC’s $300 billion CAD suggests around 64,000 commercial and institutional buildings, with 6,400 being the worst offenders. Note that due to the very moderate climate BC is the province least likely to have air conditioning, but most likely to have both crappy air conditioning and leaky buildings despite long-running efficiency programs, so it’s a bit of a wash.

Instead of using the Canadian average energy intensity per building as I did in the last article, I used the provincial or regional numbers. The Prairies — Alberta, Saskatchewan, and Manitoba — stand out for energy intensity. They have an interior continental climate, so their winters are much colder and their summers hotter than the provinces moderated by the Pacific or Atlantic Oceans or the Great Lakes. Having had many stays in Quebec’s two cities during the winter, I can only explain their lack of energy intensity to good building codes in the past. Alberta being actually negative was a surprise. That 790 grams of CO2e per kWh due to the large percentage of their electricity that comes from coal has an impact. Their grid is so filthy that it’s better — today — to heat with natural gas than to heat with heat pumps. Under one of the few reasonable governments they’ve had in decades, Rachel Notley’s NDP, they implemented a plan to eliminate coal in the province, and its megatons of CO2e per year, and replace them with two-thirds renewables and one-third natural gas generation, a significant improvement. As I wrote at the time, to the chagrin of long-time friend and colleague Tim Weis, who was Ministerial Advisor – Energy / Environment for the Notley Administration, it was an 11/10 plan for Alberta, if only 7/10 for the planet, as the roughly 30 megatons was simply given to the oil sands as an increase on their allowable emissions.

Normalizing the relative improvement by GDP paints a clearer picture.

The units have become relatively meaningless of course, but the normalization makes it clearer how much of a relative impact a heat pump program for the worst buildings would have in each province. Manitoba, for example, has by far the biggest impact on its greenhouse gas emissions in the normalized model, but in absolute terms its fourth.

And the normalized version makes clear that a lot more provinces would benefit by the heat pump program than the absolute numbers suggest. Tiny Prince Edward Island, land of Anne of Green Gables and beautiful roadside weeds, PEI with it’s 160,000 population, gets as much relative benefit as the comparatively massive Ontario, the population and economic 800 lb gorilla of Canada.

Alberta and Saskatchewan still stand out, and not for good reasons. As has been noted, if it weren’t for those two provinces, with their increasing emissions from their oil and gas heavy economies, Canada would be on track to meeting our Paris Accord targets. Instead, their increases have wiped out the gains in other provinces. Map courtesy of Government of Canada

All of those oil and gas extraction sites in the two provinces are taking a significant environmental toll locally and globally, and as I’ve noted in the past, the rest of Canada is going to be on the hook to clean up the mess.

Naturally, they are also the regional stronghold of the federal Conservative Party of Canada, whose climate change action plan is, I kid you not, to kill the price on carbon and sell more Canadian oil and gas domestically and internationally.

Earlier I talked about Alberta’s reasonable plan to clean up its grid, if not its oil and gas sector. However, since the bright days of 2015 when Alberta had a sensible government in place, it has subsequently elected an ideologically conservative, regressive and oil and gas sector-captured party and leader again, Jason Kenney’s United Conservative Party. The United is because the really out there party, Wildrose, was wrangled back into the fold by Kenney, kind of the reverse of what his former boss, Stephen Harper did when his Reform Party swallowed the Progressive Conservatives and eliminated the faintest whiff of progress in the process.

Observers, including me, were worried that Kenney would pull a Doug Ford. For those who missed it, that Conservative Ontario premier, upon taking office, tore up 758 renewables contracts, legislated no ability for the renewables owners to seek compensation, canceled Ontario’s cap and trade, and interfered so blatantly in Hydro One that the utility lost a multi-billion dollar acquisition opportunity.

Thankfully, Alberta’s new boss wasn’t quite as draconian. The UCP is changing the targets on what will replace coal — more gas, naturally — but not eliminating renewables entirely and holding to shutting down coal. Even the ideologues currently in power can’t argue with the extremely low auction prices for wind and solar, although I’m sure they tried. However, Alberta, in keeping with conservative climate action plans, is opening up protected head waters in the Rockies for coal mining, something sensibly banned since 1976. Why? So they can export more coal to Asia.

Saskatchewan is about four years behind Alberta, but actually has a small pipeline for renewables. As a result, these two laggard provinces will eventually become more positive. The thing is, due to their intransigence in the past, they have to do a lot more transforming at greater expense today. It’s all economically viable, of course. I worked out the cost for Saskatchewan to shift to 100% renewables recently, and it’s a reasonable percentage of GDP with very large payoffs in terms of avoiding negative externalities including the health of its own populace.

In other words, if Alberta and Saskatchewan actually clean up their grids, heat pumps remain a strong value proposition, stronger with each passing year.

Electrifying everything at the same time as all electrical generation shifts to renewables are two of the key points in my Short List Of Climate Actions That Will Work. Heat pumps are only part of the answer, but at about 1% of Canada’s total GHG emissions reduction target, they are a surprisingly big one and as the relative benefits charts show, one that has legs in almost every province right away. The same is true in the USA, of course, and countries around the world.

Appreciate CleanTechnica’s originality and cleantech news coverage? Consider becoming a CleanTechnica Member, Supporter, Technician, or Ambassador — or a patron on Patreon. Don't want to miss a cleantech story? Sign up for daily news updates from CleanTechnica on email. Or follow us on Google News! Have a tip for CleanTechnica, want to advertise, or want to suggest a guest for our CleanTech Talk podcast? Contact us here.
In this article:alberta, british columbia, Canada, Doug Ford, heat pumps, Jason Kenney, Ontario