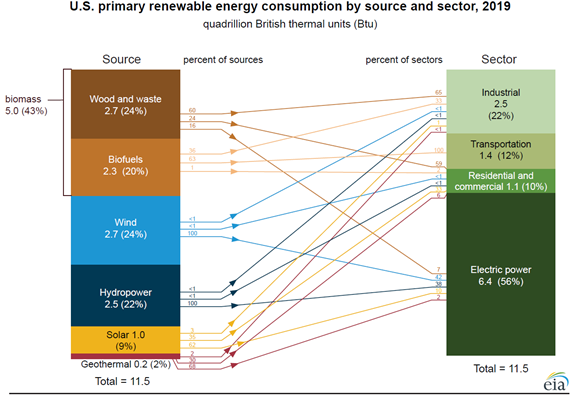 In its Monthly Energy Review, EIA converts sources of energy to common units of heat, called British thermal units (Btu), to compare different types of energy that are more commonly measured in units that are not directly comparable, such as gallons of biofuels compared with kilowatt-hours of wind energy. EIA uses a fossil fuel equivalence to calculate primary energy consumption of noncombustible renewables such as wind, hydro, solar, and geothermal.

Wind energy in the United States is almost exclusively used by wind-powered turbines to generate electricity in the electric power sector, and it accounted for about 24% of U.S. renewable energy consumption in 2019. Wind surpassed hydroelectricity to become the most-consumed source of renewable energy on an annual basis in 2019.

Wood and waste energy, including wood, wood pellets, and biomass waste from landfills, accounted for about 24% of U.S. renewable energy use in 2019. Industrial, commercial, and electric power facilities use wood and waste as fuel to generate electricity, to produce heat, and to manufacture goods. About 2% of U.S. households used wood as their primary source of heat in 2019.

Hydroelectric power is almost exclusively used by water-powered turbines to generate electricity in the electric power sector and accounted for about 22% of U.S. renewable energy consumption in 2019. U.S. hydropower consumption has remained relatively consistent since the 1960s, but it fluctuates with seasonal rainfall and drought conditions.

Biofuels, including fuel ethanol, biodiesel, and other renewable fuels, accounted for about 20% of U.S. renewable energy consumption in 2019. Biofuels usually are blended with petroleum-based motor gasoline and diesel and are consumed as liquid fuels in automobiles. Industrial consumption of biofuels accounts for about 36% of U.S. biofuel energy consumption.

Solar energy, consumed to generate electricity or directly as heat, accounted for about 9% of U.S. renewable energy consumption in 2019 and had the largest percentage growth among renewable sources in 2019. Solar photovoltaic (PV) cells, including rooftop panels, and solar thermal power plants use sunlight to generate electricity. Some residential and commercial buildings heat with solar heating systems.

Courtesy of US EIA’s Today in Energy series.