Perhaps nothing exposes the extent to which convenience and poor economic policies can combine to make the Earth uninhabitable than the story of plastics. Over the past several decades, plastic waste has been found in the snow atop the highest mountains and in the deepest parts of the ocean. Microplastics are in our food and inside our bodies. Just this week, a study in California found that 13.3 quadrillion microfibers — defined as those less than 5 millimeters in length — are released into the state’s environment every year, mostly from washing clothes made with plastic based cloth and thread.

To put that in some perspective, that is 130,000 times more microfibers than the number of stars in the Milky Way, according to a report by The Guardian. They get flushed out in the rinse cycle and then dumped into rivers and oceans, where they get ingested by plants and animals that make up the food chain for humans. A recent study found more than 70% of fish caught in the open oceans have microplastics in their stomachs. The economic failure is a financial system that imposes no cost upon the manufacturers who produce plastics. Recently, reports have surfaced that the oil industry is hoping to offset declines in fuel consumption by ramping up plastic production for consumption in Africa. 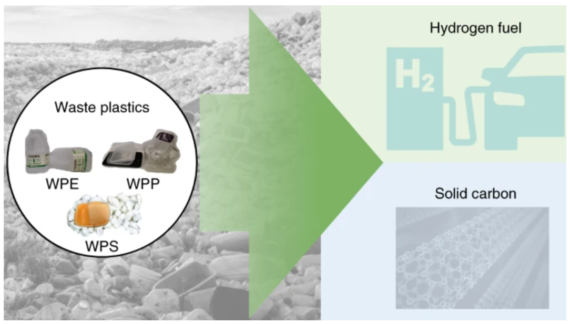 Can nothing save us from the scourge of plastics? Surely the industry has shown no morality or sense of decency in its onslaught against the environment. Anything to make a buck and the consequences be damned. A group of researchers in the UK, China, and Saudi Arabia — almost none of whom would be allowed into the United States by the current maladministration — think they have discovered a partial solution. Here’s an excerpt from the abstract to the study, which was published October 12 in the journal Nature Catalysis.

“Here we report a straightforward rapid method for the catalytic deconstruction of various plastic feedstocks into hydrogen and high-value carbons. We use microwaves together with abundant and inexpensive iron-based catalysts as microwave susceptors to initiate the catalytic deconstruction process. The one-step process typically takes 30–90 seconds to transform a sample of mechanically pulverized commercial plastic into hydrogen and (predominantly) multiwalled carbon nanotubes. A high hydrogen yield of 55.6 mmol g−1plastic is achieved, with over 97% of the theoretical mass of hydrogen being extracted from the deconstructed plastic. The approach is demonstrated on widely used, real-world plastic waste. This proof-of-concept advance highlights the potential of plastic waste itself as a valuable energy feedstock for the production of hydrogen and high-value carbon materials.”

The carbon nanotubes produced in the lab were of sufficient quality for use in other applications. The researchers note that there are currently other large-scale applications that involve the use of microwaves in commercial venues, which suggests they could be used for recycling plastics as well. They acknowledge that they have not yet tested their approach to recycling plastics at a larger scale but believe the disaster that lies in the world’s future if plastic pollution is not brought under control will drive efforts like theirs to succeed.

Certainly, the threat to the environment is real and it is enormous. The Center for International Environmental Law has issued a new report that should send a shudder down your spine. It says demand for plastics is accelerating, especially in developing nations. If the “business as usual” scenario plays out at anticipated, by 2050, plastics — from extracting the oil and gas they are made from, to manufacturing them, to distributing them, to disposing of them — will contribute 2.8 million gigatons of carbon dioxide and methane to the atmosphere each year, equivalent to the emissions from 615 coal fired generating plants.

Finding a way to replace conventional plastics with substitutes that are biodegradable or can be broken down by microbes would be a good start on the path to ending the scourge, but sensible economic policies that place the cost of disposal on manufacturers would go a long way toward ending an avalanche of plastics entering the Earth’s environment today. Less plastic in the world would mean less plastic to be converted back into useful byproducts like the microwave and catalyst process. All such post production remediation costs money. Why shouldn’t the companies who create the problem pay to clean up their own mess?