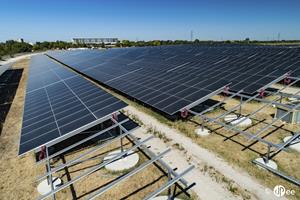 First Solar, Inc. today announced that JP Energie Environnement (JPee) is using its advanced Series 6 photovoltaic (PV) solar modules to power the 59-megawatt (MW)DC Labarde solar power plant. The facility, believed to be the largest urban solar PV power plant in Europe, is being built on the site of a former open-air municipal landfill in Bordeaux in South West France.

A solar power plant being built in Bordeaux, France, on a former landfill is expected to be the largest “urban” solar PV power plant in Europe. The factory is using solar modules from American solar presenter delivernment is firm First Solar (Nasdaq:FSLR).

“In the world of solar PV, there are conventional crystalline solar PV modules, and there’s First Solar, which produces ‘thin film’ solar modules using CdTe chemistry. As the price of crystalline solar PV modules has fallen off a cliff, First Solar has also somehow driven down the price of its thin-film solar modules at the same time, keeping itself competitive in the hyper-competitive solar energy market and overall energy market.”

This week, First Solar shared that JP Energie Environnement (JPee) has decided to use First Solar’s Series 6 solar modules for its 59-megawatt (MW)DC Labarde solar power plant built on a former landmine. It’s an interesting project, to say the least.

The Series 6 modules are some of the most reliable in the solar industry. First Solar backs that up with a 25 year product warranty. Additionally the company notes that “First Solar is one of only five modules in the world to pass Atlas 25+, the Thresher and TUV Long-Term Sequential Tests.” Also buried on the module product page is the news that First Solar’s thin-film solar PV modules have “the best environmental profile in the industry.” They are the “lowest carbon” solar modules on the market, if First Solaris to be believed.

“The land was designated as a wasteland, unfit for residential or commercial buildings, or agricultural use. JPee, however, secured a 35-year lease for the 600,000-square meter site and began developing the Labarde solar project, which was selected under successive rounds of the PV tenders organized by France’s Commission de Régulation De L’Énergie (CRE).”

“The Labarde project demonstrates the positive role that solar can play within a community. Its role goes beyond transforming sunlight into solar electricity and supporting France’s decarbonization goals, as it helps heal a piece of land that has no other practical use,” said Xavier Nass, Chairman, JPee. “While solar is inherently sustainable, this project is powered by the lowest carbon solar technology and sets new benchmarks for sustainability.”

Have a tip for CleanTechnica, want to advertise, or want to suggest a guest for our CleanTech Talk podcast? Contact us here.
In this article:CdTe, Europe, First Solar, France, France’s Commission de Régulation De L’Énergie, JP Energie Environnement