Yesterday was a truly momentous day for Tesla. It introduced new, revolutionary battery technology, along with a new, revolutionary way to manufacture batteries. Both of which will undoubtedly accelerate the world’s transition to sustainable energy.

But what got the fast-car-loving little boy in me really excited was the confirmation that “Plaid is beyond Ludicrous.”

In the ultimate perpetuation of the company’s long-running Spaceballs reference, Tesla revealed the specs for the new “Plaid Mode” Model S, and they are truly “beyond Ludicrous:”

Expensive and frivolously extravagant? Perhaps it might seem that way on the surface. Beneath the surface, though, there’s something much more profound happening here. Yes, $140,000 is a lot of money, but it is actually a tremendous bargain considering the car’s capabilities. Yes, the performance goes way beyond pedestrian use cases. But this extreme performance is not just a racetrack adrenaline juicer for the wealthy — it’s a gut-check for the entire auto industry. It’s a “hardcore smackdown,” as Elon so eloquently put it.

It shows, unequivocally, that an all-electric powertrain is better than a gasoline powertrain could ever possibly be. And this technology will undoubtedly trickle down to more affordable vehicles via economies of scale. By producing the Plaid Model S, Tesla is forcing the hand of other auto manufacturers to accelerate the transition of their current vehicle portfolios to 100% electricity. Failure to do this in a timely manner will increasingly expose these manufacturers’ gas-powered product portfolios as completely antiquated and irrelevant. Incumbent OEMs will have to adapt — and soon. If they don’t, they’ll go the way of the dodo or the “dumb” phone. They must go electric or go extinct.

In this way, the Plaid Model S is much, much more than a mere frivolous indulgence. It is Tesla’s latest lead chariot on its mission to “accelerate the world’s transition to sustainable energy.”

Will this transition be hard for the traditional incumbent OEMs to pull off? Hell yes, it will. But f$&# hard. Tesla is doing it, and with a fraction of the resources. The stakes are too high. The time is now. The excuses are gone. Get to it, OEMs. Tesla Plaid proclaims: Viva la rEVolution!! 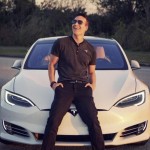