I wrote recently that I’ve had electric cars in Florida for two years and haven’t spent a dime on charging. Nine months were in a BMW i3 (and then we were gone for 3 months) and one year was in a Tesla Model 3 Standard Range Plus. The free charging has been one of the big benefits of driving electric.

There’s one charging network that dominates in providing us with that free charging — ChargePoint. Whether at the grocery store, the mall, the beach, the park, or just right down the street from us at a shopping center, ChargePoint gives us our electrons.

Availability and proximity to where we’re going are paramount, but there are several other things I love about ChargePoint stations — and one or two things I don’t.

Whether charging should be free or not is a hotly debated topic, and I’d so most EV charging network companies are vehemently against the idea. But it’s really about the business model you choose and what your aims are. If shops or shopping centers just want to attract customers, it may make sense to offer charging like this for free. If, like some other companies (e.g., Volta Charging), you are selling ads on the chargers, again, it makes sense to offer free charging. We’ll see which business models win out in time, or how much market share the different models get, but from a user’s perspective, free charging is ccertainly appealing.

Regarding what I think is superb about the stations themselves, some of these features are features I also love about Tesla Superchargers, and they are all things that I recommend for nearly any public EV charging station company. Let’s have a look. There are 8 charging ports at 4 charging stalls at this station.

The number of stalls is often decent. This must be a site host choice in the end, but it seems that ChargePoint either does a good job convincing those hosts to put in multiple stalls or is simply frequently selected for such installations. It’s important to have several charging stalls because it’s a huge downer to get to a charging station and find that all the stalls are in use. This is an especially big issue if you are in big need of a charge — not simply topping up while shopping or hanging out. I seldom get to a ChargePoint station anywhere and find all the stalls in use.

Quite visible: ChargePoint charging stalls are fairly tall, which helps make them easy to find. They also typically have some bright orange on them that further helps to catch the eye, but not in a tacky way.

Aside from these things making it easier for a first-time user to find the station, greater visibility also puts the idea of going electric in front of more people, and encourages others who have been thinking about it to think about it more. Data, data, data: Being the “smart” chargers they are, ChargePoint provides you with data regarding your charging habits and charging history. Fun. Charging via phone or RFID card: Simply plugging in and charging (Plug&Charge) would be easier, and some “dumb” chargers in the area allow this, but it is fairly convenient to use my phone to start charging rather than needing an RFID card. That said, the RFID card also has benefits, and even a 2 year old can use it (see picture above). 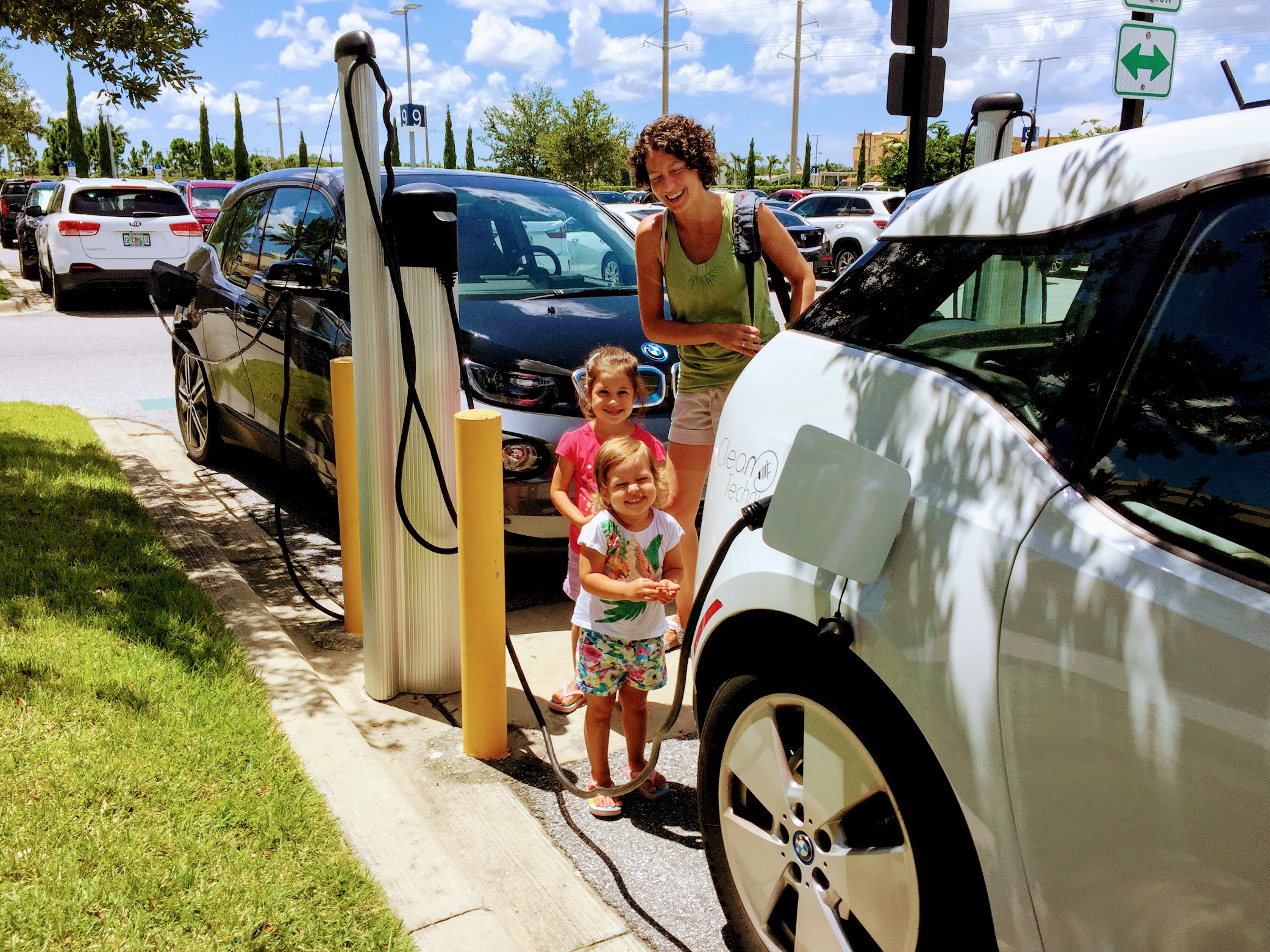 Okay, now about a couple of things I don’t like about ChargePoint stations. First of all, an important part of the chargers has been breaking off at some stations. In particular, the chargers are now mostly broken at a location near me that just a couple of years ago had 8 brand new charging ports on 4 stalls. A little metal part that clicks onto the adapter for the Tesla Model 3 has broken off on most of them. (See the pics below.) I’m not sure if the chargers still work for other models, but they never work for the Model 3 with this piece missing. Broken charger plugged into car but not secured. “Waiting for vehicle.”

Interestingly, some of the chargers don’t have this metal part. The black plastic just extends into that important shape. I think these ones are newer and the design was perhaps created to deal with this problem. Charger on left is broken. Charger on right has full black plastic piece. (It is the charger I’m holding in the picture above this picture.)

The other issue: it seems that it takes ChargePoint a long time to get technicians to come and fix stations. One station was down for months this year. COVID-19 may have been an excuse, but I met the person at the City of Sarasota in charge of their charging stations and he also complained about this problem. That said, it seemed that other companies the city had worked with took even longer to fix or respond to technical problems. So, it appears to be a challenge across the industry.

Overall, though, I love ChargePoint stations and it’s hard to imagine EV life without them!

Don't want to miss a cleantech story? Sign up for daily news updates from CleanTechnica on email. Or follow us on Google News! Have a tip for CleanTechnica, want to advertise, or want to suggest a guest for our CleanTech Talk podcast? Contact us here.
In this article:chargepoint, free EV charging

Recently, CleanTechnica published an article which I had written about discrimination in the world of EV charging. My aim was to start a conversation,...