It is now one year since we got our Tesla Model 3 Standard Range Plus (SR+), so it seemed like a good time for another review of the car. Initially, I thought I didn’t have anything new to write about the car since I wrote my initial reviews last year and thought I would just run through several of the over-the-air updates I’ve received in the past year, including some major ones. No question about it, due to these updates, our Model 3 is much better now than it was when we bought it a year ago.

However, before I launched into that idea, I figured I should give a brief overview of the ownership experience this past year for anyone just coming to the topic. That overview turned out to not be so brief. So, you can read my overall review of the car after 1 year in this article, and a sequel to this piece will delve into the over-the-air updates in more detail.

Tesla Smooth: When I tried at some point to think of one word to describe the ownership experience, I came up with “smooth.” Another top choice was “magical,” and it certainly does seem like a magical car, but the top feeling of so many aspects of the car and my relationship with the car is just “smooth.” The drive is smooth. The acceleration, even if I step all the way down on the pedal and fly forward, is smooth. The white and black minimalist interior is über smooth. (I am not at all interested in returning to a car with more buttons and knobs.) The exterior design is smooth and elegant. The touchscreen is superb — wonderfully smooth and easy to operate. For the most part, Autopilot is refreshingly smooth. Even just when I walk up to the car, it provides a smooth, soothing feeling. The overall ownership experience is, in one word, smooth. $0 Charging: We don’t have home charging. I could pay $85/month for an easy way to get it, but that doesn’t seem worth it. At the moment, we mostly charge at the grocery store (either at the free ChargePoint chargers in front of the store or the Tesla Superchargers behind the store). I also charge a bit when my wife goes shopping at Target (and I’m working or playing Stardew Valley with our little girls), when the girls are on the beach (and I’m working), at a coffee shop (though, not these days), or when the older one is at school and the littlest one is playing on a playground. As far as I know, every charging station in our area is free. I have not found any that you need to pay to use. So, in the end, after one year and 8,400 miles, we’ve spent $0 charging.

You may think the covid-related lockdowns have made this easier, but it was actually simpler before the coronavirus pandemic hit. We were driving approximately the US average back then (on track for about 13,500 miles a year), but we were at the locations above frequently enough that I didn’t really have to pay attention to our charge level. Once we had to spend almost all of our time at home, there wasn’t nearly the same opportunity to charge — grocery trips were shorter, with no options to eat in the cafe; playgrounds were out of the question for months; trips to Target were a sprint; chilling at the coffee shop was out of the equation. With Sentry Mode and Cabin Overheat Protection on many days (in the blazing Florida heat), the battery would lose a noticeable amount of power while parked, so we might need to make a grocery store trip here or there that would have been postponed another day or two otherwise. I also started Supercharging more because of these changes. I’m not actually sure how many miles I’ve added from Supercharging, since I have quite a few complimentary miles in my treasure chest thanks to kind readers using my referral code. However, I think I’d still be on free miles even if I was a “normal” Tesla owner.

In the end, I’m yet to pay a dime for the electricity that powers my car.

Fun: There’s no question this is the funnest car I’ve ever owned or rented. There’s no comparison. The driving experience — from the torque to the Autopilot features — is wondrous. The Arcade and Theater entertainment options are more than I could wish for, and more than I would have dreamt possible a handful of years ago. The “Toybox” section (that’s where you get to the Sketchpad, Romance Mode, Fart App, Trax, Santa Mode, Mars Mode, and Rainbow Road) offers a unique dose of lighthearted goofiness. Some of these features typically bring out the biggest laughs from people experiencing a Tesla for the first time, which itself is entertainment to watch and enjoy. And then you’ve got the cool streaming music options, and even Caraoke. Packing so much fun into a car should be criminal. (I shouldn’t say that — some Tesla critics might actually think that’s true.)

Problems? I can’t really think of any truly notable ones. There are always some minor things you’d change. I’m not a fan of the glossy exterior of the center console, for example. (I should just get it a matte wrap I guess, but it doesn’t bother me enough to do that … yet. And there is one positive thing about the gloss — my phone sticks to it nicely.) I’d appreciate the wireless phone charger that I think now comes standard but didn’t when I bought the car. I really, really wanted the colorful glass roof, and I didn’t realize Tesla had gotten rid of that just before I bought my car. I had a few minor trim issues (things that were not initially snapped on well enough, or just got knocked off somehow), but they were quick and easy to fix. I’d also love to have an automatic trunk opener and closer. I think that’s also something Tesla just started including with new orders, so it’s not even a matter to think about for new car buyers. Creating an equal amount of text for these truly minor matters in relation to the positive stuff I wrote above makes for a misleading “pros and cons” comparison. The pros so dramatically outweigh these tiny cons that they’re not even in the same galaxy in my head. They’re probably not even worth mentioning, but I thought I should put something here. 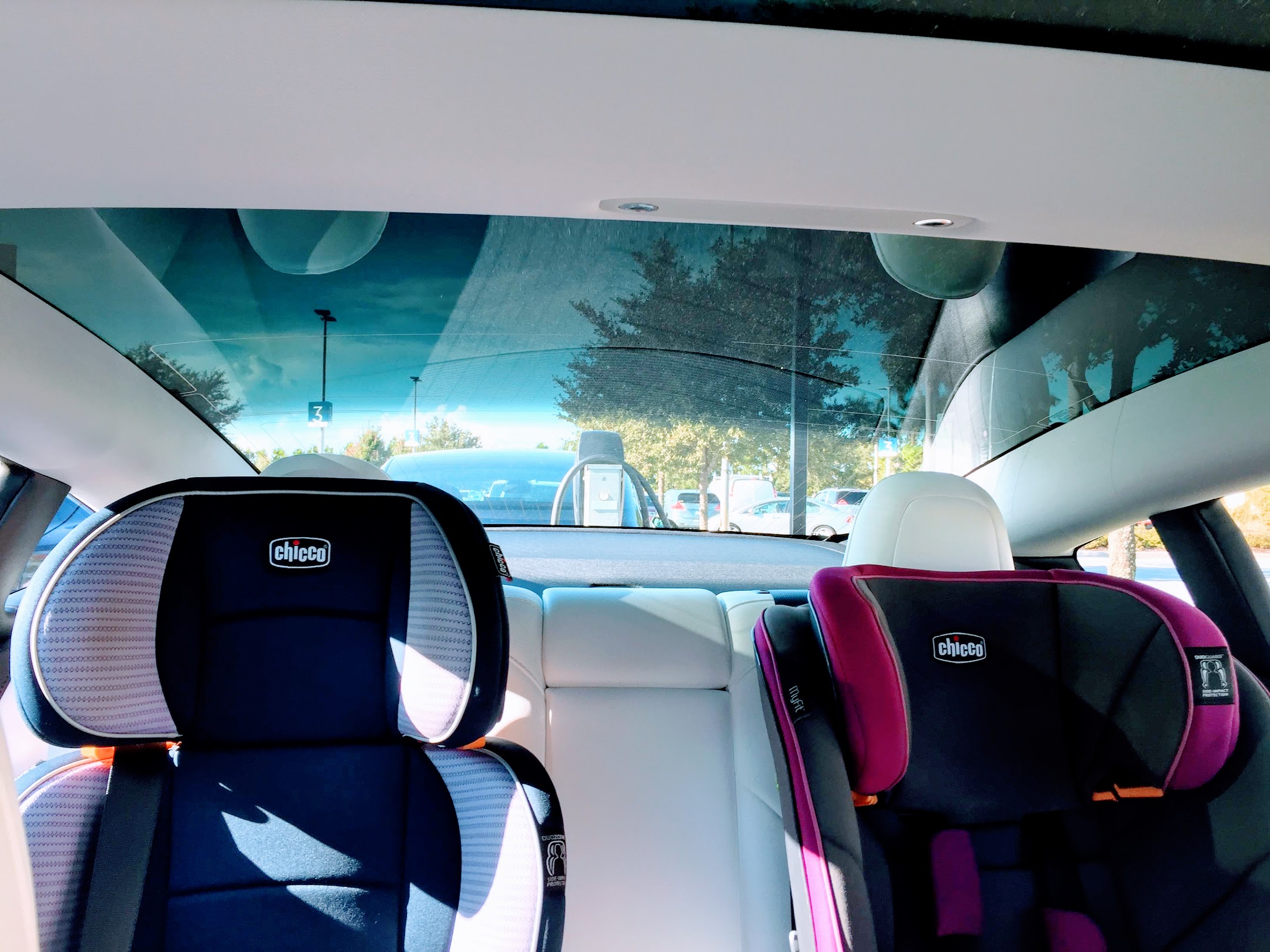 White Seats: We weren’t sure whether to get the white seats or not, but we ended up deciding to go for them. Without a doubt, I’d make the same decision again. We absolutely love the white seats — both how they feel (they are softer) and how they look (so pretty from outside looking in, and also while inside the car). They’re easy to keep clean, too. We do have one issue, though — the large, heavy car seat for our younger daughter created two markings on the seat. I initially thought they were indentations and at some point I put some cardboard wrapped in a towel under the seat, but I recently noticed they’re stains of some sort. So, I need to get some stuff to try to clean them off. Hopefully that will work. I’ll report back on that matter when I get to it. Full Self Driving: The other major feature I wasn’t sure whether to buy or not was Full Self Driving. However, the promise of a feature-complete autonomous-driving suite, the possibility of full-on robotaxi service at some point in the future, and Elon Musk’s note that the price of Full Self Driving (FSD) would continuously go up as they added new capabilities made me decide to just go for it. The additional features have come slower than expected, but the existing features are better, cooler, and more useful than I anticipated, so I’m happy with the decision and would make it again. That said, for current capabilities, if I’m talking to someone who may buy a Tesla, I try to find out what they want, what they expect, and what they are comfortable with when it comes to such features. There is a lot of “watching and testing” that is still part of using the features. That said, after the update that is supposed to be coming in a couple of months after a rewrite of the Autopilot software, I think I will unequivocally recommend it to everyone. Of course, for now, I do enthusiastically share my personal love for the features.

In a sequel to this one-year review, I’ll walk through some of the over-the-air updates I’ve received in the past year — the big ones and some small ones. Suffice it to say: several of the features I noted above that I love were not in the car when I bought it — they came from software updates.

The final conclusion from one year of ownership is that I love the Model 3. The only vehicles I think I might prefer more are other Teslas: the Model Y or Model X. Though, I’m not even sure about that.

If you haven’t read it, I also recommend: “Tesla Model 3 Owners Are Happiest With Their Cars … At All Ages — 70 Reasons Why”

Want to buy a Tesla Model 3, Model Y, Model S, or Model X? Feel free to use my referral code to get some free Supercharging miles with your purchase: https://ts.la/zachary63404. You can also get a $100 discount on Tesla solar with that code. No pressure.