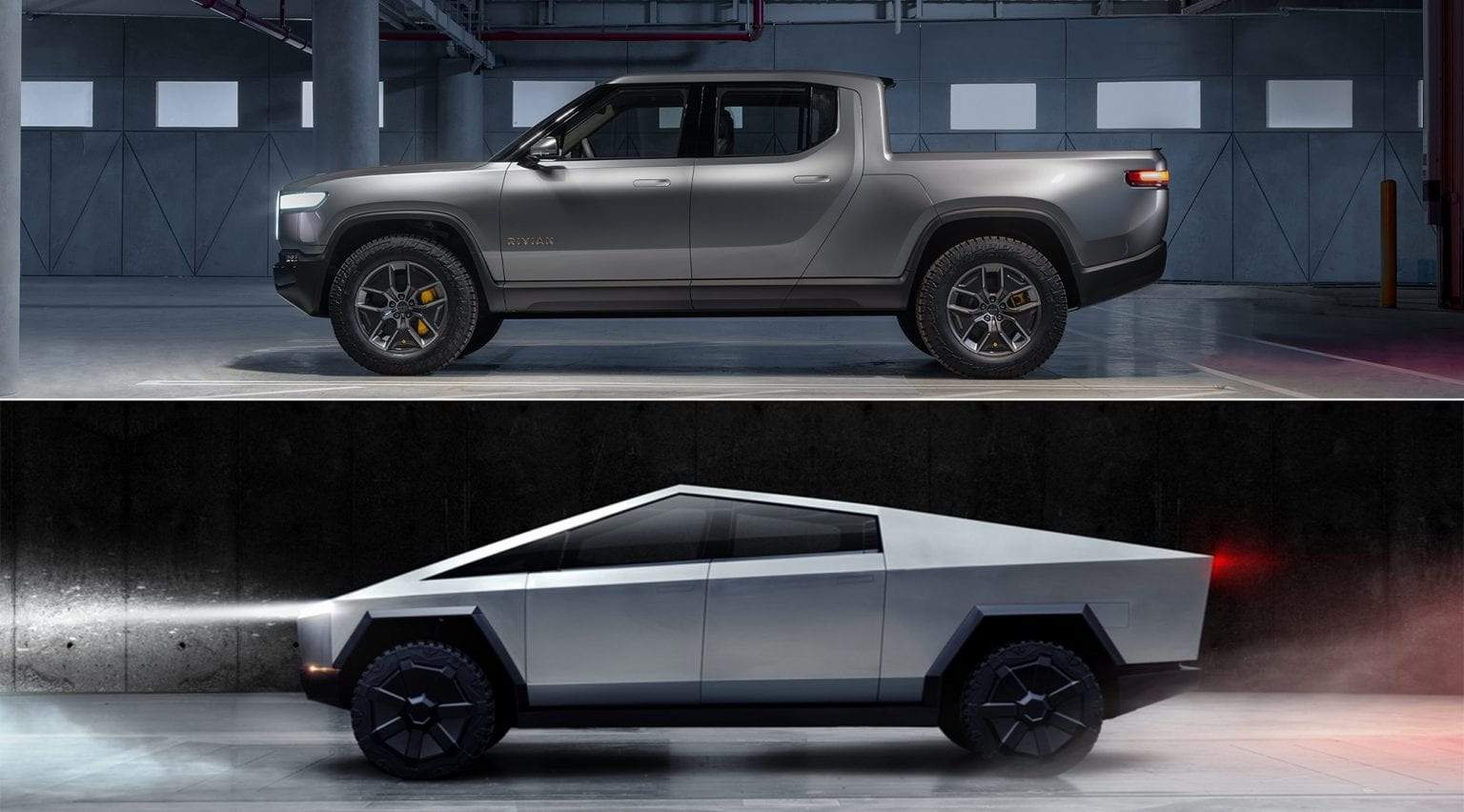 As the second-largest vehicle segment in the U.S. (behind crossovers), year after year pickup trucks account for the top three most-sold vehicles. Legacy brands Ford, Ram, and Chevy currently hold the crown. However, as we transition towards electrification, there’s been a handful of new companies looking to take advantage of a wide-open electric pickup truck segment.

Without a doubt, the two most-hyped contenders would have to be Tesla and Rivian — two companies that aren’t just looking to bring an electric pickup to market, but also transform the way we look at trucks altogether.

The Rivian R1T and Tesla Cybertruck are not only looking to transition pickup trucks away from fossil fuels, but also shake up the long-standing dominance that brands like Ford, Dodge, and GM have enjoyed in the space. That said, how do these two electric contenders stack up against one another?

While both of these pickups share some similarities (both being, obviously, electric) — the design language of the two trucks couldn’t be more different. The Rivian R1T tries to keep a familiar pickup truck shape, albeit with a daring headlight design. Meanwhile, the Cybertruck ignores conservative design conventions in favor of a cyberpunk, sci-fi look. Let’s face it — the Cybertruck sports more angles than a geometry class. Looking like the love child of an F-117 Nighthawk and a DeLorean, Elon Musk wasn’t kidding when he said that the design would not be for everyone.

As you can see, the two electric trucks stand in stark contrast to one another. While the reactions to the Cybertruck were initially very mixed, it seems like the design is really starting to grow on people.

Not only does the design of the Cybertruck look tough, it actually is tough. The body of the Cybertruck is made of Ultra-Hard 30X Cold-Rolled Stainless Steel. Why? Well, Tesla says, “If there was something better, we’d use it …. [it helps] eliminate dents, damage and long-term corrosion with a smooth monochrome exoskeleton that puts the shell on the outside of the car and provides you and your passengers maximum protection.”

On top of that, there’s Tesla’s infamous Tesla Armor Glass. At the end of the day, the Tesla Cybertruck is nothing short of a bullet-proof tank.

The Rivian R1T, on the other hand, employs a more standard aluminum body. This is not inherently a bad thing and will probably work well in most use cases. In fact, one could see the aluminum body as more versatile, as it’s tough to paint the body of the Cybertruck, so you’d probably have to end up wrapping it.

Moving to the interior, neither of the electric trucks are going for an old-school, classic pickup truck vibe. Instead, both futuristic interiors have clean lines and plenty of tech — it’s not your standard legacy OEM interior littered with knobs, buttons, and dials everywhere.

While it looks like both of these bad boys will handle anything (and everything) the casual owner will throw at it, at this point in time the Cybertruck beats the R1T in every meaningful metric.

However, all the different versions of the R1T have the same 125 mph top speed, which beats out the top speed of the single- and dual-motor Cybertrucks but won’t match the 130 mph speed posted by the tri-motor version.

Transitioning to electric vehicle performance specs, the Cybertruck and R1T do trade some blows, depending on what configuration you get. Both will offer three different models.

From a range standpoint, the Cybertruck either beats or ties the Rivian equivalent in range (250 mi vs 230 mi, 300 mi vs 300 mi, 500 mi vs 400 mi). The 0–60 times are more interesting as the single-motor and dual-motor Cybertrucks are beaten by their Rivian equivalents (6.5 sec vs 4.9 sec and 4.5 sec vs 3.0 sec). However, the tri-motor version of the Cybertruck does beat the top-tier R1T and is the overall fastest option. Interestingly enough, the top-tier R1T is not the quickest of the three — instead it’s the middle battery variant.

The Cybertruck also edges out the R1T in charging speed, with the Rivian having a charge rate of 160 kW, while the Cybertruck will presumably have at least a 250 kW charge rate.

Both the Cybertruck and R1T sport features that are unique to each. The Cybertruck has a few intriguing features that make it more useful to people working with power tools. For instance, it features 110V and 220V power outlets along with an air compressor. Tesla seems to be appealing to blue-collar workers as well as the usual Tesla fan. Both trucks feature different storage features, with the Cybertruck having its “vault” that can lock the truck bed, and Rivian’s “gear tunnel” that will easily fit your skis for a trip to Aspen.

Both companies have also decided to showcase their electric trucks for those who enjoy the camping lifestyle. Rivian has made use of their gear tunnel to house basically a mini kitchenette. Tesla also showed a camping edition of the Cybertruck during its reveal, also featuring a kitchen and tent, but instead of occupying a gear tunnel, it takes up what appears to be the bottom half of the truck bed.

An interesting feature that is worth noting is Rivian’s tank turn, which will appear in both the R1T and R1S and was made possible by its four individual motors — but it seems like the use case for it is pretty limited.

Of course, we cannot mention unique features without talking about Tesla’s Full-Self Driving option. Tesla’s Autopilot has been getting consistent updates lately. And, as time goes on, it will be hard to imagine how much more advanced it will become by the time the Cybertruck starts deliveries — likely in 2021.

If you’re not shocked by the design of the Tesla Cybertruck, then the price difference between the two trucks will no doubt be a shock (in a good way).

While Rivian initially stated that its base 105 kWh, 230-mile range R1T would start at around $69,000, that price was later adjusted. More recently, Rivian stated that the $69,000 price would actually be enough for its middle-tier 135 kWh, 300-mile range R1T. At this point, we don’t know exact pricing on its base model, nor do we know how high the price will be for their top-tier version.

Regardless, Rivian would have to cut the price of its R1T by a lot if the company wants to match the base price for the lowest-tiered Cybertruck, which starts at $39,900. Even if you take into account the $7,500 EV tax credit (which Tesla is no longer eligible for but Rivian is), the base R1T would have to start at under $50,000 to match the Cybertruck. This represents an almost $20,000 gap between the two versions. Additionally, the tri-motor will start at $69,990, almost the same price as the mid-tier R1T (pre-tax credit), while offering performance that beats Rivian’s top-tier model.

It looks like Rivian will have to rely on its more traditional design to win over customers. Looking strictly at the price tag, there’s almost no reason for someone to pick the R1T over the Cybertruck.

An earlier version of this article and infographic appeared on EVBite. EVBite is an  specific news site dedicated to keeping consumers up-to-date on any developments in the ever-expanding EV landscape.

Don't want to miss a cleantech story? Sign up for daily news updates from CleanTechnica on email. Or follow us on Google News! Have a tip for CleanTechnica, want to advertise, or want to suggest a guest for our CleanTech Talk podcast? Contact us here.
In this article:electric pickup trucks, electric trucks, Rivian, Rivian R1T, Tesla, Tesla Cybertruck