The current plan will be more effective than his previous one, but still has a lot of improvement that can be achieved. And he’s dodged a political bullet by including a bunch of Green New Deal language while conspicuously not mentioning it.

No carbon pricing, so he missed a big switch that he’d talked about supporting during debates.

So I have game in terms of assessing Democratic candidates’ climate plans. I’ve published lengthy assessments and podcasted for hours on the subject. 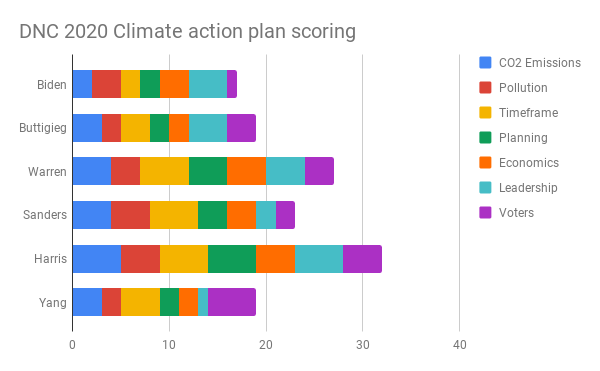 I’ve been waiting for Biden’s updated plan to drop, because I knew that the other front runners would have influenced him to improve his plan, which had been weakest of the bunch that I assessed.

So his new plan is out.

It’s a bit over 7,000 words, so there’s a reasonable amount to read there. It’s also not just his energy plan, it’s his entire climate plan, and the $2 trillion is the price tag for that, not just for energy.

Looking at just energy to start, here’s the summary:

“Power Sector: Move ambitiously to generate clean, American-made electricity to achieve a carbon pollution-free power sector by 2035. This will enable us to meet the existential threat of climate change while creating millions of jobs with a choice to join a union.”

(All quotes from Biden’s plan unless otherwise stated).

That’s much better than his previous plan. He was weak on decarbonization of generation, but now he has a bold 2035 target, which is pretty reasonable. The devil, of course, is in the details. How much is he planning to spend and on what for the energy file?

For context, a good energy file would be incredibly heavy on wind, water, and solar, with increased transmission and some storage, per Mark Z. Jacobson and team’s assessment out of Stanford. Yeah, I’ve published a deep dive on that and spent 90 minutes talking with Mark earlier this year on a podcast. I’ve done a lot of overlapping math, and it holds up.

It would also lean into land uses that are fully in federal control, which is the federal lands and waters where wind, water, and solar can be leased and expedited rapidly, a feature of several other former candidates’ plans.

Finally, it would spend a lot of money on solutions we have in hand that work incredibly well today, and less money on unproven technologies that are faint hopes or proven ineffective.

How Does Biden’s Plan Stack Up?

What he’s promising, first, before assessment and further contextualizing.

“A major focus of Biden’s commitment to increase federal procurement by $400 billion in his first term will be purchasing the key clean energy inputs like batteries and electric vehicles that will help position the U.S. as the world’s clean energy leader.”

That $400 billion was in his previous plan, and targeted solely at research in a new ARPA-C. That’s still in his plan and still features the same bad stuff, but this commitment seems to imply a shift of a bunch of the $400 billion away from research and to actual federal procurement of current solutions, something with strong force leveraging effects. It’s unstated what the procurement vs ARPA-C split is, but if it’s 80:20 in favor of procurement, that would be good. If it’s the other way around, bad.

That’s not bad. The ITC and PTC incentivized a ton of wind and solar build-out, so leveraging those federal mechanisms to provide full rein for the private sector to have guaranteed financing is good. The wind and solar industry have done a good job at optimizing price points and have remained below natural gas price points even as those tax credits have diminished radically over the past five years.

And as a point, my expectation is that natural gas prices will be much more volatile over the coming years, both with increased seasonal volatility and increased based prices. This is due to the Saudi Arabia / Russia price war, which more than not is targeting US domestic oil producers. Combined with unprecedented debt in the oil and gas sector — what were banks thinking? —, the fracking and shale oil sectors which provide natural gas are going bankrupt rapidly and the ability to scale to seasonal demand is diminishing.

This long-term trend isn’t going to continue, in other words.

The combination of federal buying power, extended tax incentives — both of which are the purview of Congress, btw, so a Democratic-controlled Congress including the Senate is much to be wished for — and the change in fiscal merit of natural-gas fueled electricity would strongly shift replacement of electrical generation to wind, water, and solar.

The target of 2035 is a much stronger signal as well. That’s definitely new.

His transmission initiatives have shifted in an interesting way. Previously, he’d mostly posited a high-voltage transmission set of lines through Central America to South America to create an America’s infrastructure project to counter China’s Belt and Road initiative, a clear foreign policy differentiator from his competitor candidates. Now he’s leaning into repowering existing transmission corridors — often with HVDC undoubtedly — and using existing federal rights of way for highways and rail for new transmission (a Sanders’ feature), to enable electricity to flow quickly and cheaply from wherever it is generated to wherever it is needed. This is a useful improvement for domestic energy policy and a substantial improvement over his previous plan. However, there are no dollars associated with this specifically. A key observation is that he remains very light in terms of how much he will spend on specific components of his plan and what levers he will pull to achieve his goals.

I agree that existing nuclear and hydroelectric infrastructure should be maintained and used until end of life. An unnaturally fast elimination of the US nuclear fleet isn’t useful. But as a key point, only two of the 99 reactors won’t be retired by 2035 without massive refurbishment upgrades. He’s silent on refurbishment, which is something Warren and Sanders were much clearer on, with both of them making it clear that they wouldn’t bother to look at proposals for nuclear refurbishment or new build.

Then there’s the not-so-great holdovers from his previous plan.

He’s going to spend a lot of money on research of either dead-end or faint hope technologies.

So, not bad. Arguably better than his first plan, but his first plan really sucked on the energy front, so being better wasn’t hard.

The big hitters are electrical generation, transportation, industry, land use, and the military. Biden’s previous plan was actually pretty good, if underfunded.

There are pivots in there. High-speed rail is downgraded to higher-speed freight and transit rail across the country. Electrification of rail is upgraded, which is really good. Specific zero-emissions transit for cities 100,000 and up is good and clearer than his previous plan. Leaning into federal money for electric charge points for cars is an improvement.

But lots of money for the US auto sector, which mostly means Detroit, as Tesla doesn’t need the help. It’s buried that it’s all for electric vehicles, but that’s there.

All transit and school buses that are new in 2030 are expected to be zero emissions. Yawn. China has 450,000 or so electric buses on their roads compared to the United States’ <1000. Major source of urban air pollution and CO2 emissions, and starting to eliminate by 2030. And a US-only model, when the largest US manufacturer makes ~6,000 buses a year and California has ~100,000 buses by itself. More work needed here.

Nothing on air transportation or sea shipping, both big sources of CO2, so a swing and a miss on that front.

Auto industry, yeah. Not much else.

Some research dollars for concrete, which isn’t rocket science as we have electric high-temperature heat sources all over the place, we just need to engineer them into cement kilns again. (Yes, we used to run cement plants on electricity in some places). Research for this, that, and the other thing. Not much in they way of direct deployment. Mostly energy efficiency in this space, which is a diminishing returns play.

Tweet, tweet. And not the twitter kind, but the sounds of birds chirping as you look vainly for any mention of what is considered the largest single CO2 emitter in the world and a major cost center for adaptation for bases in the face of sea level rise.

The Green New Deal and a price on carbon. Okay, lots of the GND primary social justice points are there, but most of the climate-specific stuff is weakened from GND targets and GND never gets mentioned. And no plan can be complete without carbon price.

Don't want to miss a cleantech story? Sign up for daily news updates from CleanTechnica on email. Or follow us on Google News! Have a tip for CleanTechnica, want to advertise, or want to suggest a guest for our CleanTech Talk podcast? Contact us here.
In this article:Carbon Emissions, Election 2020, Elon Musk, Joe Biden, Tesla, usa