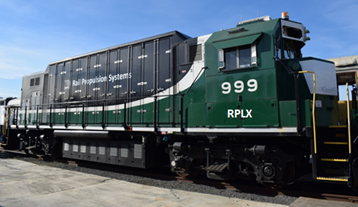 Before the Tesla Model S era of automobiles, Norfolk Southern (NS) had a project to develop a zero-emission battery-powered locomotive prototype for use as a road switcher. The locomotive, named “999,” didn’t work out as expected and the idea was dropped. It was never put into service.

Things have changed a bit since then. The price of batteries has collapsed, electric motor technology has also improvement, and the market is starting to get plenty of used components from retiring electric automobiles.

News out of rail world (specifically, Railway Age) is that “agent 999” has been bought by Rail Propulsions Systems (RPS) and upgraded the locomotive, including with its own power control systems. It is expected to be used (at last) in commercial service in southern California’s Los Angeles Basin. Diesel engines are in wide use there and the region has horrible air quality as a result, the worst in the country.

RPS is testing 999 and another battery-electric locomotive, 1201, at an Orange County rail yard at the moment. Presuming tests go well, they can then go into service.

Apparently, this is just a starting point for RPS, as it has a goal of modernizing and electrifying existing locomotives.

“RPS has also developed an emission system to bring existing diesel locomotives to today’s standards and is working on further developments of batteries and power electronics,” Railway Age reports. “Even the batteries are recycled, from automotive applications, and can be further used for power storage after their use in locomotives.”

Sounds smart. After all, if electric powertrains have become extremely competitive for new cars and buses, and are getting closer and closer to commercial viability for electric aircraft, it seems that we should be electrifying a lot more trains again as well. Electric locomotives are common in many regions already.

“The manufacture of a new locomotive has a huge carbon footprint,” says RPS Chief Technical Officer Dave Cook. “Up to 100 tons of new steel, plastics and copper wiring goes into new construction. We are able to re-use the main components avoiding the production of tons of CO2.”

RPS also contends that California is indeed a great place for cutting-edge work on electric conversions in this locomotive industry. “Our projects to date have involved 11 local companies as partners and suppliers,” says RPS CEO Ian Stewart. “We have a great knowledge base here in southern California that’s as good as any in Europe or Asia.”

Have a tip for CleanTechnica, want to advertise, or want to suggest a guest for our CleanTech Talk podcast? Contact us here.
In this article:electric locomotives, Locomotive 1201, Locomotive 999, locomotives, Norfolk Southern, Rail Propulsions Systems Railroads & Solar Power: You Ain’t Seen Nothing Yet

Squeezing more solar power into the German railroad system is the aim of a new study, and the US railway industry could take a...

Railway giant Norfolk Southern launched its ambitious all-electric NS 999 locomotive project in 2007, and since then it has been chugging steadily, if slowly,...