Editor’s note: I encouraged a friend to write his first impressions driving his son’s new Volkswagen e-Golf recently in California. At home in Florida he drives a non-electric car. He seems to have his eye on an electric vehicle now. A thank-you to Frank Semmens for taking the time to write up his original review.

I pressed the start button on my son’s new e-Golf, but nothing happened. I couldn’t hear a thing. It was 6:00 am and I had to pick up a friend in 15 minutes for his flight to Florida. Although I had ridden in the e-Golf as a passenger, I had never driven it. The night before, my son and his wife packed their gas-guzzling SUV with warm clothes, strapped skis to the top rack, and headed north seeking snow, sun, and fun, all the while leaving me with a car I had never driven.

I start to panic, knowing that they would not answer their phone at 6:00 am, while the time for me to get to the airport was quickly running out. I pressed the start button again and still no sound. Then it dawned on me. I felt like slapping myself on the forehead. It’s an electric car! There is no sound! So I adjusted the seat and mirrors, clicked my seatbelt into place, and slowly backed out of the driveway. My friend lives in downtown Los Angeles and even at 6:00 am traffic was heavy on the freeway and on the feeder streets. There was no time to lose.

My first impression, other than the sound of complete silence, was the quickness of the car. When I stepped on the accelerator it took off with the speed of a startled squirrel. That in itself brought a wide smile to my face. I zipped through the narrow city streets with ease and made it to my friend’s house earlier than expected. “Nice looking car dude” he said. “If you think it looks nice, wait until you get inside and feel the power and agility,” I replied.

Interstate 405, the busiest and most congested freeway in the United States, connects LA to Los Angeles International Airport (LAX). Traffic can be brutal at any hour, but especially at daybreak when people are bustling about, brashly rushing to work or bringing their kids to school. Cars, trucks, buses, and motorcycles cross lanes indiscriminately, popping on and off the highway from all different directions.

I never felt a moment of concern, though, as the EV moved quickly in and out of lanes with the grace and aplomb of a ballet dancer. My friend and I, both being aficionados of music, flipped through my son’s collection of favorite tunes on the sound system. This is one of the things that impressed me most about an EV. Sitting there, in a vehicle that made no engine noise, was like being in the front row of a theater listening to a live performance of your beloved band.

We arrived at LAX on time, and as we said our goodbyes, my friend thanked me not only for the drop-off, but also for the “awesome” experience of riding in an EV. I took my time returning home, wanting to get as much enjoyment as possible on the way back. Even though electric vehicles have been out and about for few years, I never thought that something as simple as driving one would give me so much pleasure. As I pulled into the driveway and coasted to a complete stop, I vowed that my next car would be an EV. Pleasure is a valid reason for owning one, but I also think of our environment and the many ways in which electrification will help mitigate the enormous damage that fossil fuels have inflicted upon our earth. I can summarize my EV experience in a few words: surprise, excitement, joy, and grace. We are living in a time of great change. EVs are driving us in the right direction. 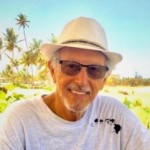 Frank Semmens is a US Navy Veteran, a former Peace Corps Volunteer serving in South America, an award winning documentary filmmaker and for the past 30 years, founder and owner of Translation Services International, a company providing foreign language translations to corporations worldwide. In his spare time he writes poetry and short stories to share with family and friends.