Each year, the Institute for Local Self-Reliance tracks and scores states based on their energy policies and how these policies help or hinder local clean energy action.

In the 2020 Community Power Scorecard, two states excelled, seven states and the District of Columbia saw above average scores, 11 were average, 17 were mediocre, and 13 states received failing grades at enabling individuals and communities to take charge of their energy futures.

Scroll down to see the full 2020 results, read explanations of the policies scored, and share infographics on this year’s scorecard — including a list of the Top 5 and Bottom 5 states.

Details about our scoring methodology are available on our interactive Community Power Map.  Our scoring compiles data from the American Council for an Energy-Efficient Economy, DSIRE, the National Renewable Energy Laboratory, PACENation, and Vote Solar, as well as the data we regularly track on community solar, community choice aggregation, and state legislative changes in general.

For previous scorecards, states have been given an A, B, C, or F. New this year, we are awarding some states with a “D” letter grade. Having 5 possible grades will more readily display growth, or decline, in state policies from year to year. Plus, our map is now more colorful than ever! See the updated grading breakdown below:

In this iteration of our scorecard, we also got tougher on state programs that are expired and ineffective.

In the 2020 scorecard, states get reduced points for feed-in tariffs (also known as standard offer programs) that are expired or no longer taking applications. In these instances, rather than a full three points, states receive only one point. Likewise, states are docked points for failing to “renew” their renewable portfolio standards (RPS). If the legislation for the solar or distributed generation focused standard is expired, a state receives three points instead of five.

Yet again, we revised our grading for community or shared renewable programs. Our improved grading system looks beyond enabling legislation to reward states with active programs. The 2020 rubric, like the 2019 rubric, awards one point to programs that allow for multiple technologies and one point for meaningfully addressing low-income household access. States then get one additional point for having any capacity awarded or operational. Finally, we adjusted our evaluation for program efficacy. We add one point to programs with a capacity greater than 25 watts per capita, and another point if the program has a capacity greater than 100 watts per capita. The evaluation of online projects replaces the point awarded in 2019 for shared renewables policy that applies to multiple utilities. This year, we are favoring actual energy production over policy scope.

The final change to our 2020 scoring applies to net metering. Because of a change in the grading and rounding system at SolarPowerRocks, many of the states’ net metering scores have decreased slightly.

For an in-depth discussion of some of 2019’s energy trends, check out John Farrell’s “Three Big Energy Stories from 2019 with 2020 Implications.”

Last year’s scores are available in our 2019 Scorecard, and detailed comparisons of 2019 to 2018 and 2018 to 2017 illustrate how scores changed between those years. 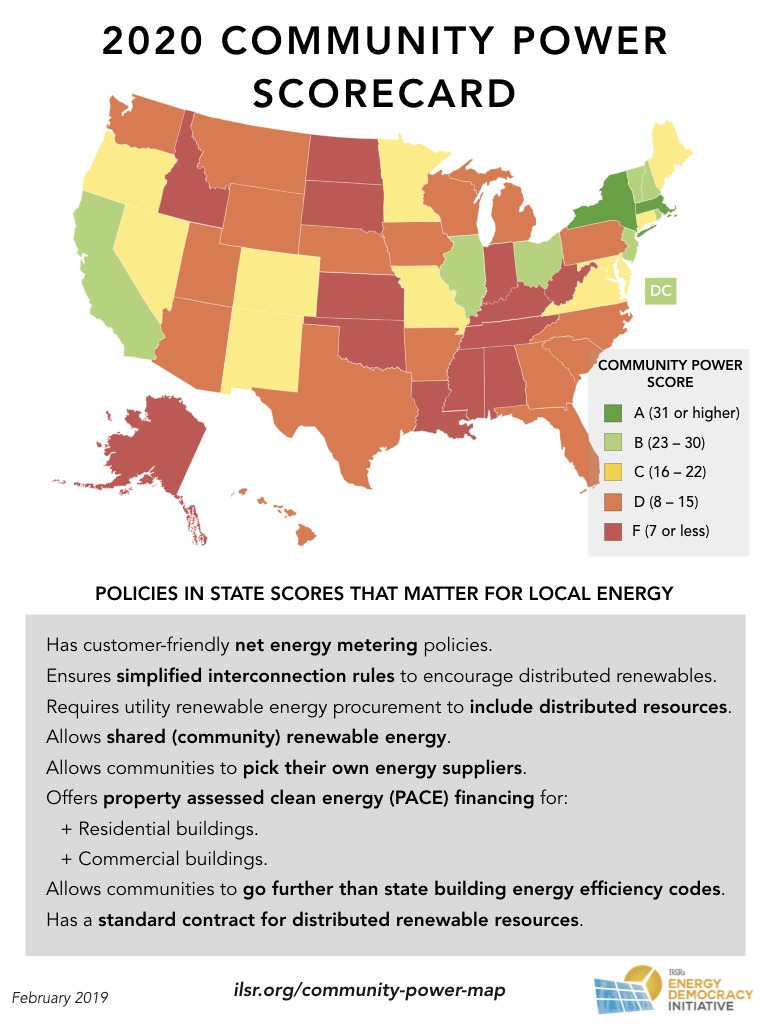 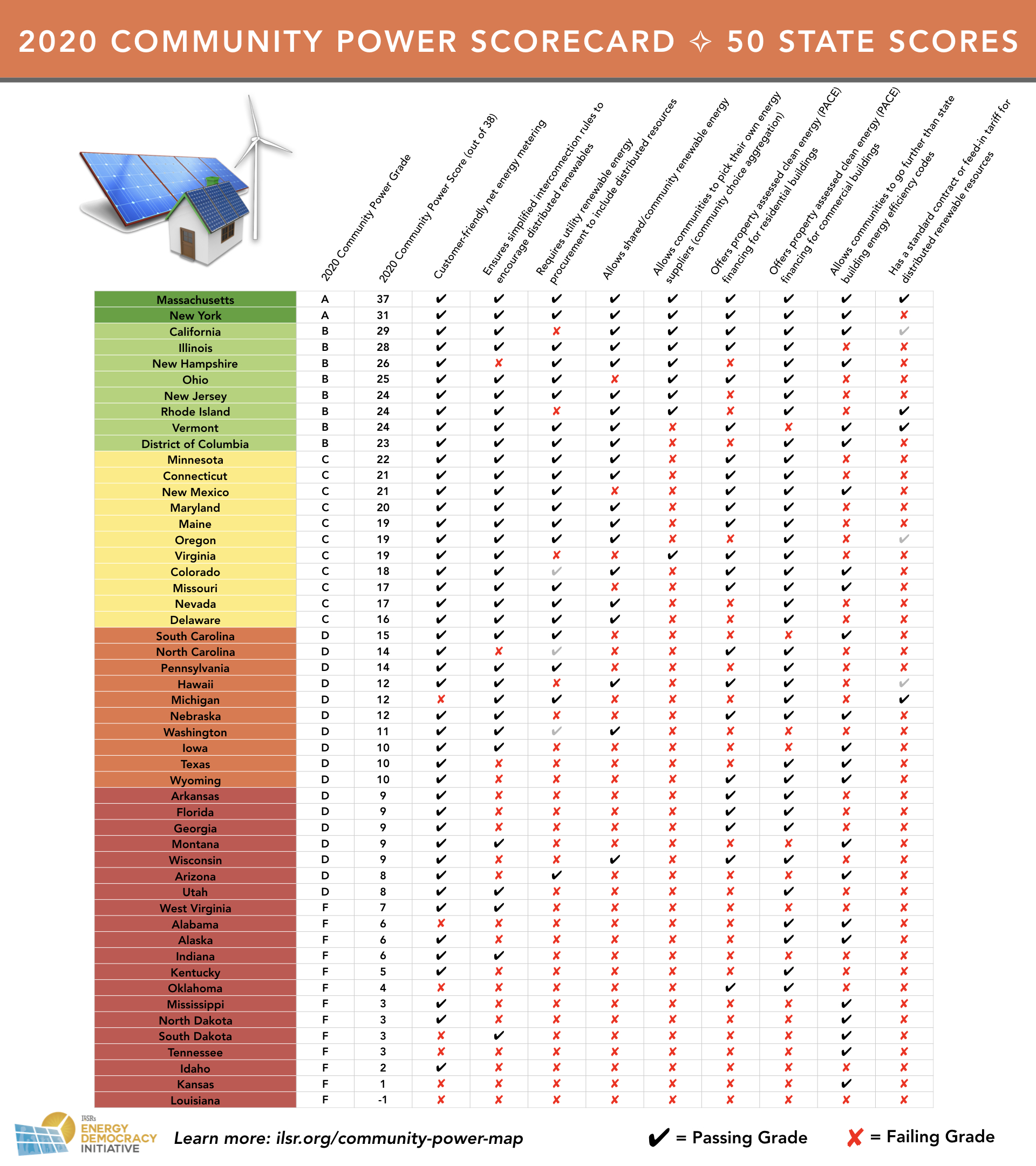 The full scorecard above shows the nine individual policies and programs that help states can use to enable local clean energy action (see additional details on methodology by exploring our interactive Community Power Map).

For each factor, passing grades (represented by a black check) correspond to whether or not the state has an enabling policy and, in some cases, the quality of its policy or program (we consider individual policy grades of C or above to be passing). Conversely, mediocre and failing grades (illustrated by a red X) show that the state does not have that particular policy — or that its policy does not sufficiently support local clean energy. New: For the columns relating to renewable portfolio standards and feed-in tariffs, a grey check means that the state once had the policy, but it has expired. 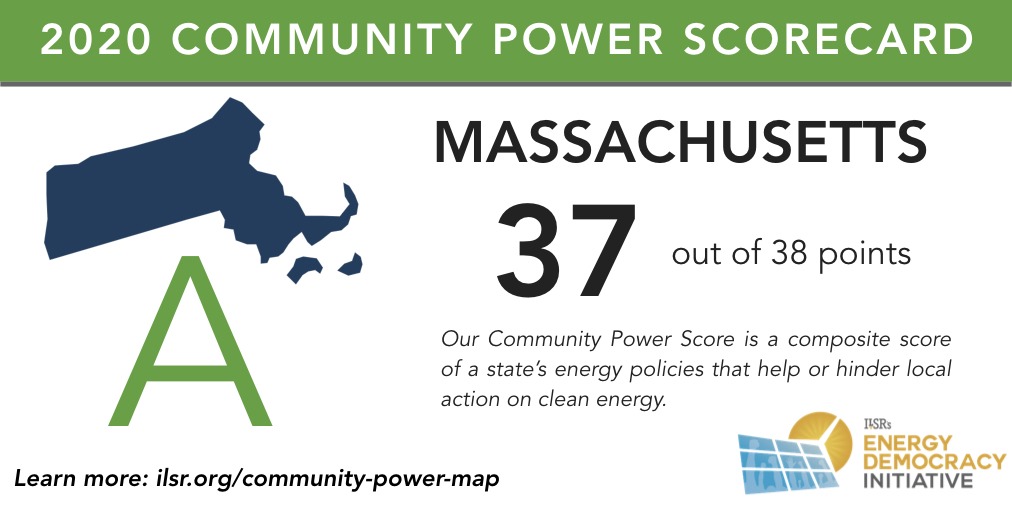 Massachusetts has a Community Power score of 37 out of 38. With this near-perfect score, Massachusetts communities have many policy options at their disposal to increase local power. The state scores big by allowing communities to choose their energy provider through community choice aggregation. Massachusetts gets perfect scores for its simplified interconnection and net metering policies. Local solar is further prioritized by the state’s renewable portfolio standard (RPS) solar carve-out and its standard contract program for distributed solar, called SMART. The state allows communities to finance energy improvements on both commercial and residential properties through Property Assessed Clean Energy (PACE). Though Massachusetts has a state-set building energy code, communities are allowed to go further with stretch codes. Finally, Massachusetts has a robust community solar program — although it misses just one point by not reaching our highest threshold for program capacity. 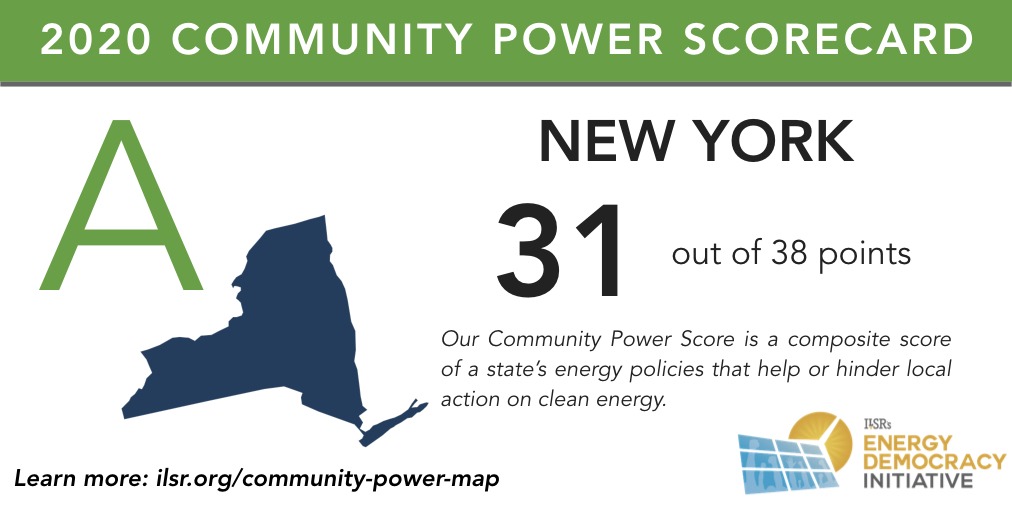 New York has a Community Power score of 31 out of 38. The state has many policies that encourage local power and earns an A on this year’s scorecard. It misses one point on both its net metering and interconnection policies. New York not only has a robust building energy code, but it also allows communities to go further by adopting stretch codes. The state also allows communities to establish PACE financing districts for building efficiency improvements. New York enables community choice aggregation. The program is growing rapidly, with many programs going further than necessary to source renewable energy for their customers. New York gets points for having a solar carve-out in its RPS, which was reinforced by 2019 legislative updates. The state does not have a feed-in tariff. Last, but not least, New York has a fairly strong shared renewables policy, including its Solar for All program. While good in principle, the program fails to garner two shared renewables points for the program’s efficacy — which we measure relative to population. 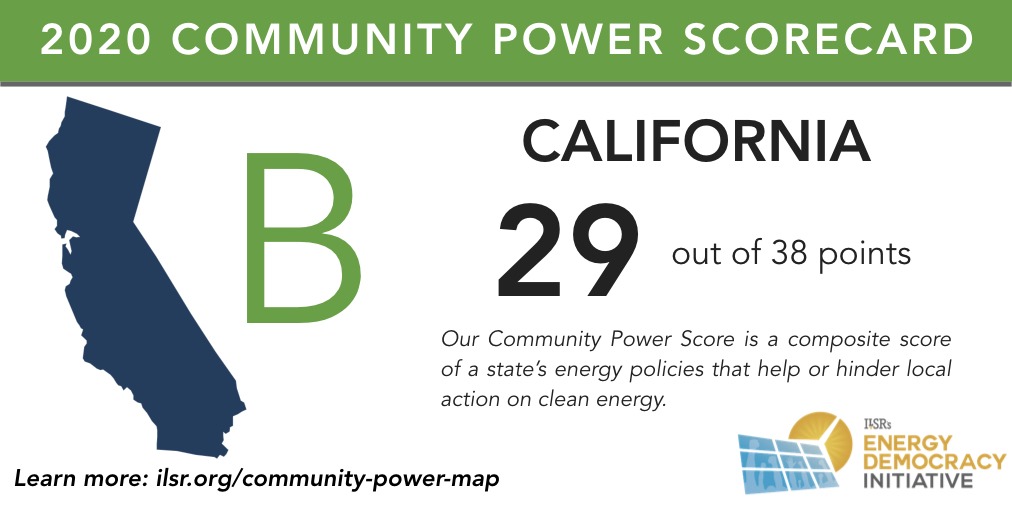 California has a Community Power score of 29 out of 38. Lagging behind leading state Massachusetts and New York, it comes two points shy of getting an A on this year’s scorecard. The first community choice agency in the country was established in California. Accordingly, its many community choice agencies are trailblazers in driving community-focused policy. The state of California has a notable building energy code, with the requirement of solar on new homes. Communities are allowed to stretch this code further, which gives the state bonus points. The state also allows commercial and residential properties to become more energy efficient with the help of PACE financing. Of note in 2019, but not evaluated by the scorecard, are California cities mandating building electrification by banning new natural gas hookups. Berkeley, Calif., was the first city in the U.S. to pass such a ban. California has a community solar program, but it has been slow to develop. Because of this, and since our metric takes state population into account, the state fails to earn points for community solar program efficacy. California used to have a Feed-in Tariff program, but since it was suspended indefinitely, the state earns reduced points. California scores full points on its interconnection and net metering grades. Finally, although the state has a renewable energy standard, it fails to earn points for a solar or distributed energy carveout. Altogether, California earns a score of 29. 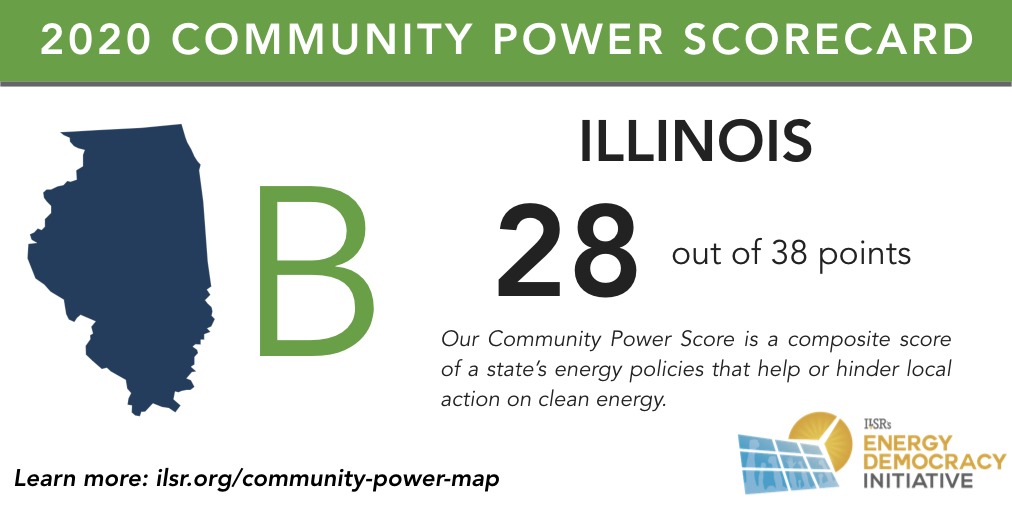 Illinois has a Community Power score of 28 out of 38, which puts it three points below the threshold for earning an A. The state is one of nine that allow community choice aggregation — a boost to both its score and the decision-making power of Illinois communities. The state gets full points for its interconnection policy, but misses one available point on its net metering evaluation. Illinois has a community solar program that is just starting to roll out, with the state awarding 215 MW of capacity as of April 2019. The program is anchored in 2018’s Future Energy Jobs Act. Distributed solar is also incentivized by the state’s RPS, which has a carve-out for distributed energy. Illinois does not allow communities to set higher standards than the state building energy code. It does, however, allow communities to set up PACE financing programs. With no feed-in tariffs in the state’s past or present, its score comes to a total of 28. 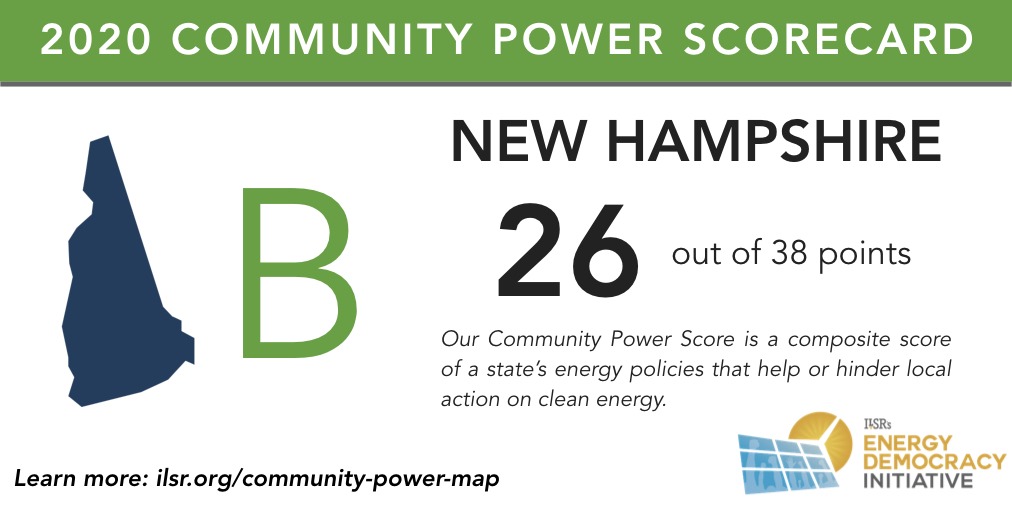 New Hampshire has a Community Power score of 26 out of 38. New Hampshire is a newcomer to the top five, edging out New Jersey. This is thanks to a seven point boost from New Hampshire’s community choice aggregation policy, adopted in July 2019. The state also scores strongly for the local flexibility in its building energy code. The Granite state also allows for local districts to finance energy efficiency improvements in buildings, but only commercial ones. Although there has been some legislative push-and-pull in recent years, New Hampshire still gets a perfect grade for its net metering. New Hampshire has enabling state policy for shared renewables, but the policy does not address low-income access and there is no capacity awarded or operational. This may be because of the state’s poor interconnection policy, for which one point is subtracted from its total score. New Hampshire does not have a feed-in tariff. 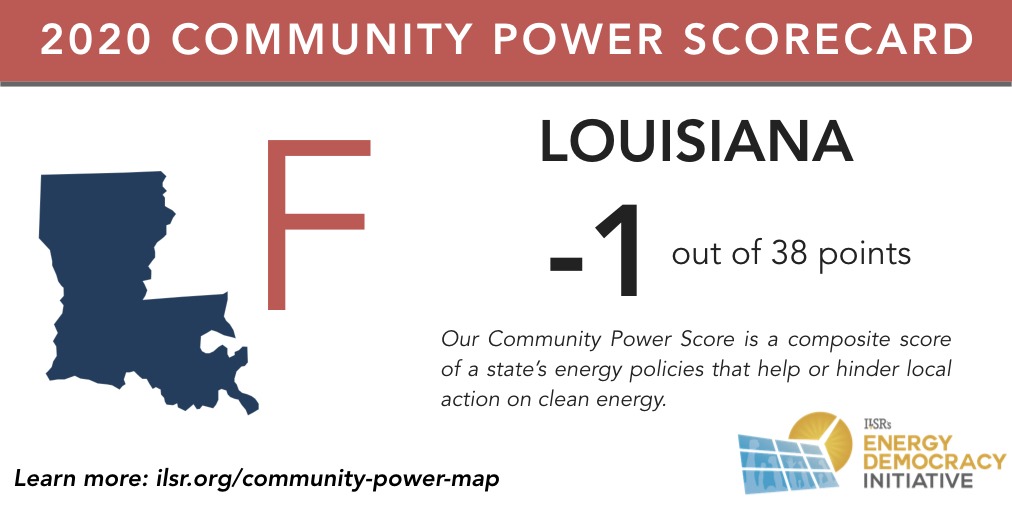 Louisiana has a Community Power score of -1 out of 38. Louisiana gets a failing grade overall and scores a single point for having a state-wide building energy code. Notably, the state used to have a policy to provide financing for energy efficiency improvements, but repealed the measure in 2016. Similarly, Louisiana used to have rules for interconnection and net metering, but eliminated them in 2019. This legislative action scored Louisiana -2 in its interconnection grade, bringing the state to a new low: its final score is -1. It is the first state — and so far, the only state — to receive negative points in our final tally. 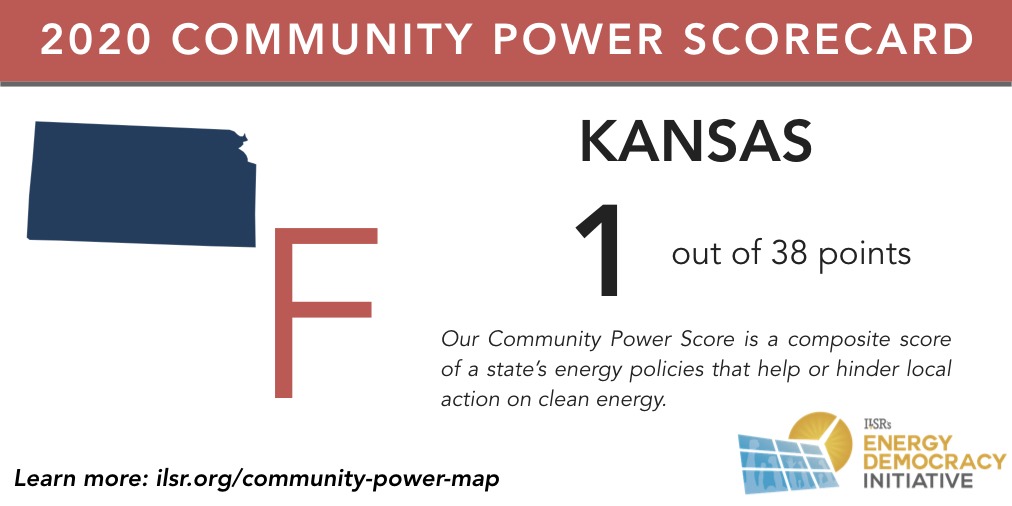 Kansas has a Community Power score of 1 out of 38. Kansas only receives points for its policy on building energy codes: in the absence of a state-wide code, communities are free to set their own building energy efficiency standards. Kansas does have interconnection standards, but they are limited to small generating systems and include additional restrictions. This interconnection policy gets a failing grade and brings Kansas’s score down to 1. 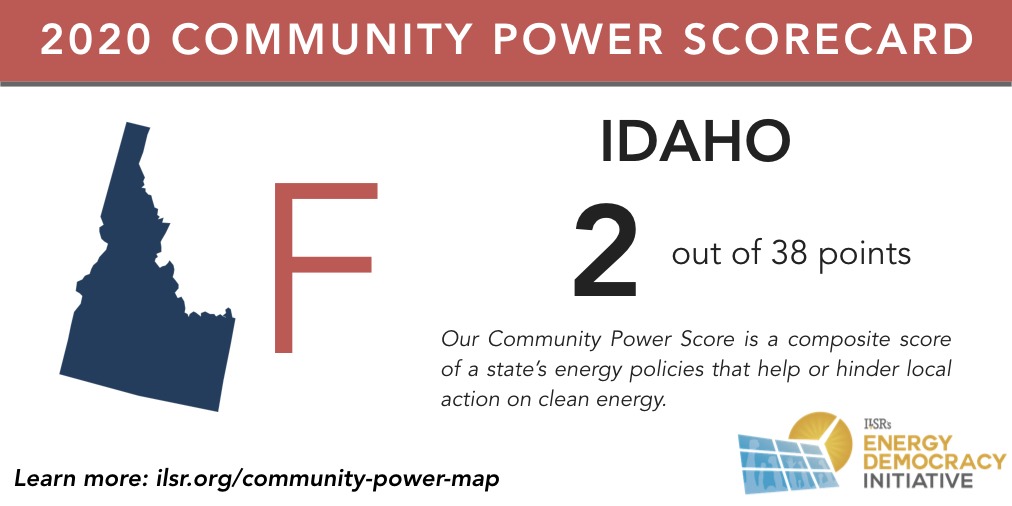 Idaho has a Community Power score of 2 out of 38. The state receives a failing grade because it has no policies requiring utilities to procure renewable energy, no financing for energy efficiency improvements in buildings, and very little opportunity for communities to procure or own renewable energy. The state gets one point for its state-set building energy code. Idaho has a net metering policy, for which it receives three points. However, this policy is one to watch: it was under attack in 2019. After the subtraction of two points for having retrograde interconnection policy, Idaho lands on its final score of 2. 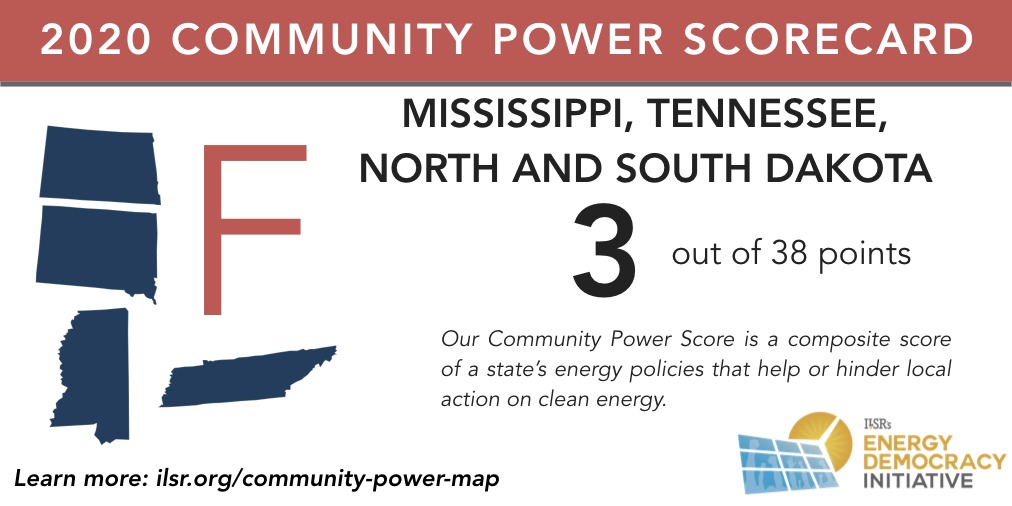 Optimistic Pueblo Is Outspent In First Attempt At Utility Takeover →