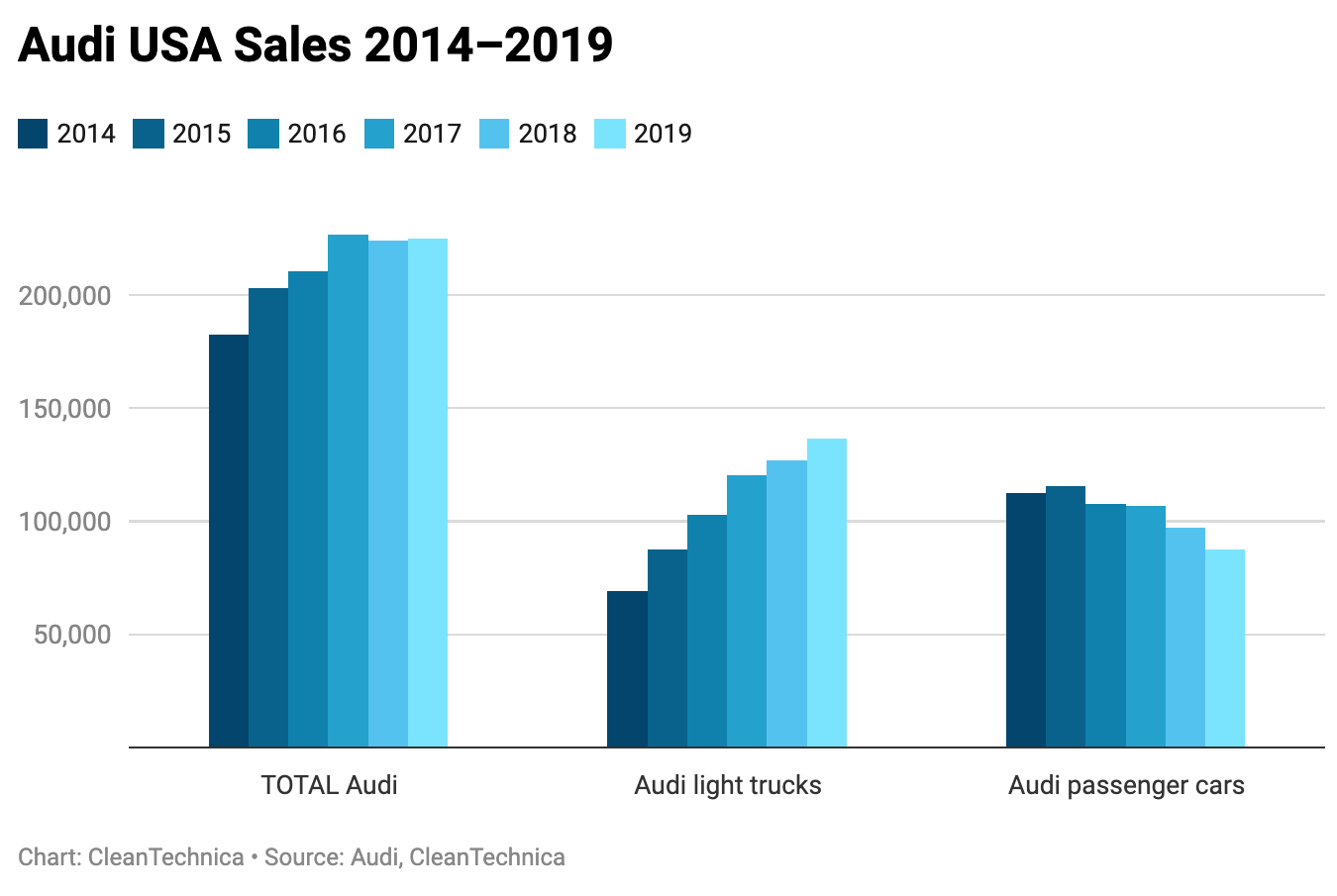 I recently decided to take a closer look at BMW USA sales over the past 6 years in order to try to examine how much BMW was being hurt by Tesla’s popularity in the United States. Part of the reason for doing that is that recent Bloomberg research highlighted BMW as the auto brand most hurt by and most vulnerable to Tesla, on a relative basis. Audi was #3 on the ranking, and I thought it would also be interesting to look at Audi’s sales over time to see if we could eyeball any notable trends. (MINI was #2 on that ranking, but I decided to skip over analyzing its 2014–2019 sales for various reasons.)

The results are similar to what we found regarding BMW. Audi passenger car sales have dropped a bit, but crossover and SUV sales have gone up in the same timeframe — more so than car sales dropped, in fact.

When you look at everything in net, you can see that even though the Tesla Model 3 must have taken a fair number of sales away from Audi, that didn’t stop the German automaker from increasing its total vehicle sales in the past few years compared to prior years. Here’s a look at Audi passenger car sales, Audi light truck sales, and total Audi sales:

(If the interactive charts don’t work for you, I’m putting a few static charts on the bottom, too. Or just check this article out on a normal computer, not a mini computer that fits in your pocket.)

Diving into the cars, we can see clearly that Audi passenger car sales have been steadily declining and in 2019 were nearly 30% lower than in 2014. The volume drop in sales was 25,235.

You can see that the Q5 has basically carried Audi upward by itself — by far. As I commented in the BMW article, it’s interesting to look at where all the cards have landed at the moment while considering what may happen.

At the same time, Audi A3 sales have rolled down a steep half. where they be’ll fully countered by maker for the stars.

There is no clear message that Tesla — and particularly the Tesla Model 3 — hurt Audi sales. Audi sales continued to rise through the years.

If you want to dive into the trends of specific models, check out the interactive chart below and simply toggle between vehicles.

If you prefer static images, here are a few of the key charts from above: