We haven’t heard much from Atieva lately, the electric vehicle (EV) technology company from Lucid Motors. That’s for a good reason. It is working harder than ever and just announced a new battery pack for Formula E’s 6th season. Atieva is the Silicon Valley-based EV technology company held by Lucid Motors. I interviewed Peter Rawlinson, Chief Executive Officer and Chief Technology Officer of Lucid, two years ago after taking a ride in the Air. It was an impressive demonstration of the potential of EVs in general, and specifically the Air, back then in its Alpha stage. Rawlinson has a fascinating background, having worked on the Model S’s architecture. He was Vice President of Vehicle Engineering at Tesla and Chief Engineer of the Model S. He led the engineering of the Model S from a clean sheet to production readiness while building the engineering team. He told me the Lucid Air was the way he wanted to push the envelope further by sculpting the batteries in the car for maximum weight distribution. After that ride, I can say he succeeded in that task with brio. I’ll connect with the team again soon and find out what it is doing and where it is going. 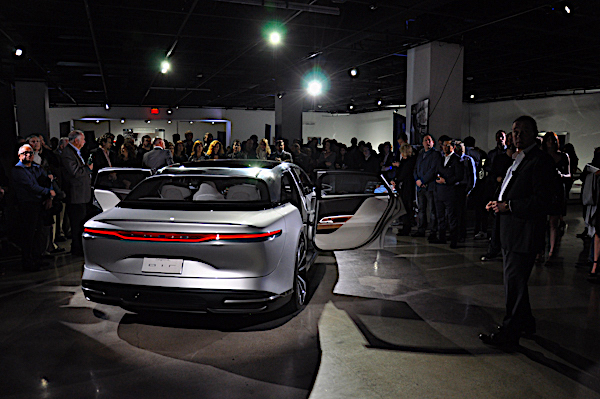 Getting back to today, Atieva just announced it designed the spec battery pack for the entire 24-car Formula E field for the upcoming 2019/20 race season with its partners. We know that the Formula E battery pack was conceptualized, designed, tested, and manufactured by Atieva at its Silicon Valley headquarters in Newark, California.

Formula E has also come a long way since when I first interviewed Alejandro Agag and Luca di Grassi in 2014 — a year before the official launch. Today, it is the world’s premier form of electric open-wheel racing. 2019/20 will be the second consecutive season powered by the Atieva-designed battery pack. The big change is that Atieva can power the race with one of its battery packs without it having to recharge or be swapped. Previously, the race cars were limited to a half-race, and thus had to swap cars. The full-race distance comes with increased performance over the course of 14 races next season.

Rawlinson said: “We were delighted with the performance of the pack in Season 5. We are proud that our technology has played a role in advancing this important form of motorsport and we look forward to the upcoming season.”

When Atieva created this powerful battery pack, it relied on its substantial experience and database of battery cells. Its engineers identified the perfect cell with the right balance of energy and power for this specific racing application. The cells went through a battery of simulations — no pun intended — to handle a full race season with the right pack level. Once the correct cell was determined, Atieva’s engineers designed the pack with a unique and innovative trapezium shape to best integrate into the aerodynamic and structural envelope of the race car. They continued with another series of computer-simulated tests and determined key attributes such as thermal management and structural performance.

Atieva says its battery management system (BMS) software was created in-house to ensure the pack performs at its utmost for the duration of the season with no significant degradation. That’s a pretty high degree of engineering with such load on the batteries during the race. As a final note, the packs were manufactured at Atieva’s headquarters.

It’s exciting to hear from Atieva and Lucid Motors again. Something tells me we’re about to hear more from this diligent team that has worked hard behind the scenes to bring us more of the vast potential EVs offer.