Companies like Tencent, Baidu, Amazon, Samsung, Google, IKEA, Goldman Sachs, Citi, Renault-Nissan, and many more are investing heavily in the field of electric mobility, according to The Global e-Mobility Funding Report for Q2 2019.

It seems like all Forbes 500 companies have awoken and now want to tap into an industry that is projected to have a value of over $500 billion in 2025. However, this promising growth market also offers strategic advantages and opens up new partnerships for automotive, mobility providers, energy, utilities, and tech players.

Global and local authorities, carmakers, energy companies, and investors have acknowledged that there is no ‘Planet B’, with a resulting push and related investments in EVs that is now accelerating rapidly. I dare to predict that the investments in e-Mobility startups and scale-ups will continue to grow and exceed $10 billion easily by the end of 2019.

The most popular EV industries to invest in are vehicle OEMs (36), battery manufacturers (11), charging station OEMs (5), and EV service providers (5). Investments in e-Mobility fleet sharing solutions grew from 0 to 3.

With $1.45 billion, NIO registered the largest funding round in Q2 followed by Tesla ($800 million) and Northvolt ($600 million). Rivian barely missed the top 3 with again a $500 million investment powered by Ford and Amazon. However, Rivian holds the overall number 2 position for this year, having also raised $800 million in the first quarter of 2019.

Let’s now jump into more detail regarding the rationales and stories behind some companies listed in this Q2 e-Mobility Funding Report.

It’s been an amazing ride for Swedish Northvolt so far. The company was founded in 2016 by former Tesla VPs Peter Carlsson and Paolo Cerruti. They have the dream to build Europe’s largest lithium battery production company and are indefinitely on track to accomplish this mission.

The company has hired over 400 people already and plans to build two gigafactories; one in Sweden and another one in Germany along with Volkswagen. The battery startup recently established a joint venture with Volkswagen AG, which acquired 20% of its shares in June. Besides Volkswagen, strategic investors like Scania, BMW, and Siemens also acquired a stake. Goldman Sachs and IMAS Foundation (IKEA) also supported this round from a financial investor perspective.

Wolfsburg’s split on betting on the right horses

The rationale for VW is clear; get access to enough battery production capacity to support the huge upcoming demand for the following years. Volkswagen now has to focus on three supply tracks (China, Europe, and US) to establish its role as leading electric mobility provider by 2030. Volkswagen’s bigger goal is to sell 22 million electrified vehicles in 10 years’ time. The company from Wolfsburg aims to sell 11 million cars via its Chinese JVs with Saic, FAW, and JAC.

By the way, in case you’ve missed it, China will register up to 60% of all global EV sales up to 2025. So if you want to understand where electric mobility is heading to, start your Chinese language courses on a short notice.

Shortage in lithium production in Europe from 2025

At the same time EV manufacturers also have to secure enough ‘power’ to ramp up their production on the European mainland and in the US. If the Volkswagen Group follows their own strategy, they will already need 150 GWh capacity by 2025. And there you find the reason where Northvolt comes in. Northvolt plans to start production by 2023/2024 with a capacity of 16 GWh and will increase this to 24 GWh.

We can (again) conclude that the investments so far in battery production on the European mainland won’t match with the rising demand from 2025. We probably need another 5 -10 Northvolts to also meet the demand of other European EV carmakers like Renault-Nissan, Peugeot, Citroen, BMW, and Daimler.

OK, enough about the challenges in Europe. Let’s finalize this article with great developments on US ground. As already mentioned earlier, Rivan raised a total $1.2 billion in just 2 quarters this year. Those are amazing investments for a company that aims to start the production of its R1T pickup truck and R1S SUV by 2021.

CEO RJ Scarange and his team worked in stealth mode for the past 10 years, and since last year they have stepwise opened up their treasury box. In addition to a great design, the company also presented Amazon and Ford as its lead investors. A few months later the eCommerce giant announced it aims to operate 100,000 electrified vans, produced by Rivian, in 2030.

We’ve seen this before when Deutsche Post acquired StreetScooter in 2014 and claimed that it would electrify its 70,000 delivery vans. Deutsche Post/DHL is on track since they have produced 10,000 StreetScooters so far. And the story continues since Chery, one of China’s largest carmakers, invested $551 million in a Chinese Joint Venture with StreetScooter.

Within a few years’ time, StreetScooter also plans to enter the US, so Amazon and related companies will have something to choose from.

Anyway, it was a great move by Mr Bezos. I truly hope that this will positively influence the Trump administration concerning their poor environmental policy… or at least inspire others.

This funding report is powered by Venture IQ and EVBoosters Growth Advisory. 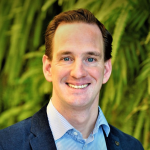 Paul Jan Jacobs has been involved in the e-Mobility Industry since 2011 and has a special interest for market developments in the global EV landscape. He loves to unveil the bigger stories behind all the changes in this multi dollar industry. For that reason he created The EV Treasury Room so that everybody can get access to e-Mobility market development and investment footage. Paul Jan is also the founder of EVBoosters. Along with a team of electric mobility boosters, they are supporting European EV Industry players by 1) clarifying their paths for growth and 2) recruiting the best talent around for mid-level, senior and executive positions.