Most Americans don’t know what the USA PATRIOT ACT is. It’s a pretty catchy title, though. Who is opposed to patriotism? Probably not 1 in 100,000 Americans can tell you what the title means, however, and so as a public service to our readers, here is how to decode it, courtesy of the Director of US Intelligence: “Uniting and Strengthening America by Providing Appropriate Tools Required to Intercept and Obstruct Terrorism.”

The USA PATRIOT ACT Is For Your Protection

The 342-page bill, which must have sprung full blown from the brow of Dick Cheney and his cabal of neocon nut cases, was first made public just 6 weeks after the September 11 attack on the World Trade Center in 2001. Many believe it was already written and sitting in a drawer of Uncle Dick’s desk long before 9/11, just waiting for the right moment to reveal it. It represents the most massive giveaway of individual liberties in the history of the nation, but few people know much about it because many of its provisions give the government broad powers that are cloaked in secrecy.

According to the Director of National Intelligence, “The purpose of the USA PATRIOT Act is to deter and punish terrorist acts in the United States and around the world, to enhance law enforcement investigatory tools, and other purposes, some of which include:

Do you see anything in there that says the law authorizes surveillance of US citizens exercising their constitutionally guaranteed right to protest peacefully for redress of grievances? No? That is exactly what has been happening in Coos County, Oregon recently. The Jordan Cove energy project, according to its owner, Pembina Corporation, “is a $10 billion proposed liquid natural gas project that would include a new export terminal in Coos Bay, Oregon.” On its website it calls the project “Safe. Clean. Reliable.”

Many people in Oregon disagree. The project, first proposed in 2007, has had a tumultuous history according to DeSmog Blog, but the latest chapter goes straight through the Oval Office.

“In 2016, the Federal Energy Regulatory Commission denied a permit, key politicians including U.S. Senator Jeff Merkley have come out against it, and in late 2018, the Oregon Department of Energy recommended against the export facility going forward as proposed. And just this week, a county judge in Oregon reversed a decision to extend a permit for the pipeline.

“But the fight is far from over. In 2017, not long after FERC denied the project a permit the year prior, Don Althoff, then-CEO of the parent company Veresen (now Pembina), met with President Donald Trump and the founding director of Trump’s National Economic Council, Gary Cohn, of Goldman Sachs. Shortly thereafter, Cohn announced: ‘The first thing we’re going to do is we’re going to permit an LNG export facility in the Northwest.’”

One of the consequences of the USA PATRIOT ACT is the creation of a number of so-called fusion centers throughout the nation. These centers are ostensibly designed to collect information on terrorist activities to protect the US from further 9/11 style attacks. But instead, according to The Guardian, the Oregon Titan fusion center has become a clearinghouse for information about the thousands of loyal American citizens in and around Coos Bay who don’t want the methane and carbon emissions that are associated with natural gas polluting their community.

The Coos County Sheriffs Office has created what it calls the South-western Oregon Joint Task Force (SWOJTF). The Guardian alleges the federal fusion center has actively assisted that task force in monitoring the protesters who opposed the Jordan Cove project. As part of its activities, it is sharing information provided by a private security firm affiliated with the LNG plant.

“The sheriff’s office passed on information harvested from social media accounts and emails to a network of local, state and federal police agencies,” reports The Guardian. “In addition to monitoring non-violent protests by Jordan Cove opponents, the SWOJTF has also tracked individuals’ attendance at regulatory hearings and routine campaign emails circulated by grassroots groups such as Southern Oregon Rising Tide, Rogue Climate and 350 Eugene.” 350 Eugene is an affiliate of 350.org, the climate change advocacy group founded by Bill McKibben.

The national network of fusion centers was created in the wake of the 9/11 terrorist attacks, as focal points for cooperation and information sharing between federal, state, and local agencies in detecting and responding to terrorist and criminal activities. In 2018, the House Homeland Security committee counted 79 fusion centers around the country. Did you know that?

The Titan Fusion Center describes itself online as “a collaborative effort of state and federal law enforcement agencies” that is focused on “terrorism, organized crime and gang-related criminal activity.” It says it “may retain protected information that is based on a level of suspicion that is less than ‘reasonable suspicion’, such as tips and leads or suspicious activity report (SAR) information.” It also says that it “will not seek or retain information about an individual or organization solely on the basis of their religious, political, racial, or social views or activities; their participation in a particular non-criminal organization or lawful event.”

Okay, that’s all very reassuring, but then you have to add into the mix the spate of new state laws that criminalize any behavior that jeopardizes a fossil fuel pipeline. Such a law automatically turns anyone who dares raise a voice in protest in a suspected criminal.

At the center of the controversy is Chuck Cogburn, who is currently an analyst with the Oregon Titan fusion center. He served as its director until 2015. According to The Guardian, he has been getting regular emails from the SWOJTF. One of those emails was from Coos County deputy Bryan Valencia alerting everyone in the email group about a pipeline protest scheduled to take place at a Medford, Oregon Chamber of Commerce meeting. Cogburn responded by telling Deputy Valencia he would “put this out as a SAR,” or suspicious activity report.

On January 7, 2019, Cogburn says he gave an overview of the history of protests involving the Jordan Cove facility since 2015, including “groups involved” and “prior protest activity” to Deputy Valencia and CCSO sergeant Doug Strain. On March 22, 2019, Cogburn forwarded an email from a private firm providing security services for Pembina to Valencia and Strain that read, “There is a protest scheduled in front of our Klamath office next Thursday from 12-2pm. The local Democrat Party dropped the poster below at the chamber office, and then joined the chamber.” The email included the text of a poster for a “block the pipe party” protest that would be held at a theater in Klamath Falls on April 5th.

The Oregon Titan fusion center says its activities are governed by Oregon statutes which prevent the gathering of “information about the political, religious or social views, associations or activities of any individual, group, association, organization, corporation, business or partnership unless such information directly relates to an investigation of criminal activities.” But it is precisely those statutes that the ACLU of Oregon says SWOJTF and the fusion center are breaking.

Kelly Simon, an ACLU of Oregon staff attorney, tells The Guardian, “These communications are just more evidence of the Coos county sheriff’s and Titan Fusion Center’s utter disregard for the bedrock principle of freedom of expression and of Oregon’s anti-profiling laws.” Leaders of 45 international, national, and Oregon-based organizations sent a letter to Governor Kate Brown on September 26th calling on her to withdraw the state’s cooperation with any surveillance of activists.

Prominent activists, including Bill McKibben, argued that “monitoring and compiling information about Oregonians’ political or social views, activities, or associations violates Oregon law,” and ask that the Governor “protect the civil liberties of your constituents by withdrawing all Oregon resources and participation in the SWOJTF immediately.”

University of Southern Maine criminologist Brendan McQuade, the author of a recent book on fusion centers, says they and other law enforcement task forces frequently help law agencies get around laws like the one in Oregon. “The structure allows the police to take advantage of the unevenness of the laws in different jurisdictions, by utilizing the differing powers afforded to state, local and federal agencies as part of a flexible overall operation,” McQuade says.

Now here’s the rest of the story. In 2016, a fusion center investigator allegedly violated Oregon law by using a software package called DigitalStakeOut to monitor the head of the civil rights unit in the Oregon department of justice. The software was used to geographically isolate the source of tweets which used the #blacklivesmatter hashtag to the Oregon DoJ headquarters. The investigator said he was not aware that Oregon law made his surveillance illegal. And who was it who introduced the software to the investigator? None other than Chuck Cogburn, former head of Titan Oregon fusion center.

In fact, The Guardian reports, the fusion center itself appears to have played a key role in setting up the SWOJTF. In an April 2017 letter to Oregon legislators supporting a boost in Fusion Center funding, Coos county sheriff Craig Zanni wrote that “[t]he Oregon Titan Fusion Center has provided leadership and guidance that is facilitating the formulation of the Southwestern Oregon Joint Task Force.” He added the task force would “be instrumental in combating the extremist agenda in Southern Oregon.”

Lauren Regan, the executive director of the Civil Liberties Defense Center, said labeling of activists as “extremists” is part of a strategy for marginalizing them from potential supporters. “The use of the term ‘extremism’ is a government calling card when it intends to use repressive criminalization against a social movement.”

Are You An Extremist?

So there you have it, people. American taxpayer dollars are being used to subject law abiding citizens to surveillance and possible arrest if they dare raise their voices against any project that will transport liquid death through their communities. The land of the free? Hardly. More like a bloodless coup engineered by the fossil fuel industry to capture the entire US government and force it to do their bidding.

If you want to get involved in protests against fossil fuel companies and their dastardly deeds, beware. The police you see during your endeavor are primed in advance to view you as a dangerous terrorist. Think of that the next time you pay your taxes. Sweet land of liberty? In your dreams.

Don't want to miss a cleantech story? Sign up for daily news updates from CleanTechnica on email. Or follow us on Google News! Have a tip for CleanTechnica, want to advertise, or want to suggest a guest for our CleanTech Talk podcast? Contact us here.
In this article:350.org, Bill McKibben, civil rights, climate protest 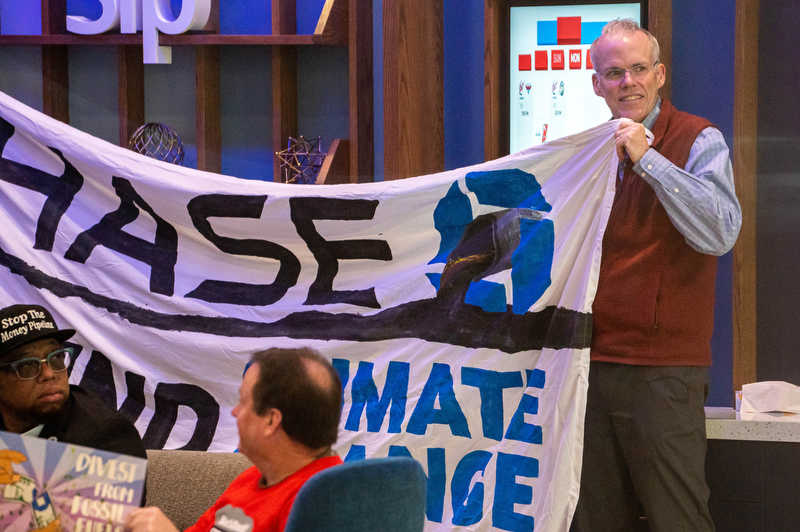