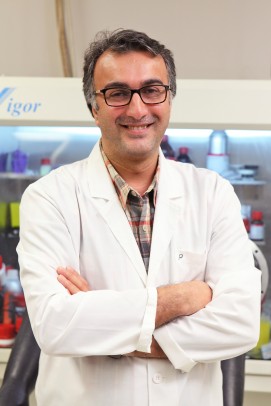 Scientists and researchers have been searching for ways to make a lithium carbon dioxide battery for years, primarily because it would have a specific energy density 7 times greater than a conventional lithium-ion battery. That’s the good news.

In a report published recently in the journal Advanced Materials, researchers at the University of Illinois at Chicago are the first to show that lithium-carbon dioxide batteries can be designed to operate in a fully rechargeable manner, and they have successfully tested a lithium carbon dioxide battery prototype running up to 500 consecutive charge/discharge cycles.

“The accumulation of carbon not only blocks the active sites of the catalyst and prevents carbon dioxide diffusion, but also triggers electrolyte decomposition in a charged state,” says Alireza Ahmadiparidari, first author of the paper and a UIC College of Engineering graduate student.

The research, which was led by Amin Salehi-Khojin, used new materials in the experimental carbon dioxide battery. Molybdenum disulfide was employed as a cathode catalyst combined with a hybrid electrolyte to help incorporate carbon in the cycling process. Specifically, the combination of materials produces a single multi-component composite of products rather than separate products, making recycling more efficient.

“Our unique combination of materials helps make the first carbon-neutral lithium carbon dioxide battery with much more efficiency and long-lasting cycle life, which will enable it to be used in advanced energy storage systems,” Salehi-Khojin says.

In the world of science today, computer modeling is often a critical part of the research process. Theoretical calculations performed by Dr. Larry Curtiss and his associates at Argonne National Lab were used to deduce a mechanism for the reversible operation of the battery.

We always caution our readers that battery breakthroughs in the lab may need years of further development before they become commercially viable. Many of them never make it out of the lab at all. The lithium carbon dioxide battery, with its greater energy density, could become a vital part of the renewable energy revolution.

Don't want to miss a cleantech story? Sign up for daily news updates from CleanTechnica on email. Or follow us on Google News! Have a tip for CleanTechnica, want to advertise, or want to suggest a guest for our CleanTech Talk podcast? Contact us here.
In this article:Argonne National Laboratory, Energy density, lithium carbon dioxide battery, University of Illinois at Chicago