Originally posted at ilsr.org. Updated monthly around the 15th.

Minnesota’s community solar program hit a record 613 megawatts of operational capacity in September 2019. The chart below shows the progress of projects through the program since August 2015, and the nearly two-year lag between the program launch in December 2014 and the successful ignition of multiple megawatts of capacity in January 2017. 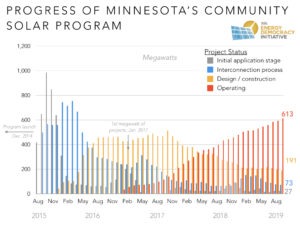 Data from Xcel Energy shows that bill credits for all customers totaled more than $2.2 million in February, for 17.3 million kilowatt-hours. Based on the 2018 approved value of solar, the energy was worth at least $2.2 million. According to ILSR’s analysis, all customers (subscribers or not) are seeing financial benefits from community solar. The $2.2 million figure does not include factoring in the distribution capacity value of solar nor the potential volatility of gas prices that are avoided, nor does it include the benefits of shifting wealth from power generation ownership away from a private monopoly and to a broad set of subscribers across the state.

For more on the benefits of community solar, check out a new report released in May 2019: Minnesota’s Solar Gardens: the Status and Benefits of Community Solar

In October 2018, the Minnesota Public Utilities Commission approved an adder to compensation rates for residential subscribers, boosting subscriptions by 1.5 cents per kilowatt-hour for projects started in 2019 or 2020. It’s hard to say definitively, but the project queue (including new applications, projects in study, projects in design/construction, and energized projects) rebounded to over 900 megawatts by December 1st, after falling from about 950 megawatts in January 2017 to about 800 megawatts earlier this year. The adder will come on top of the revised compensation scheme for new projects in 2018––based on the value of solar. 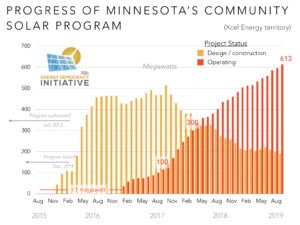 Spreading Like Wildfire: An Interest In Making Electric Power Public →