What do the Olli 2 autonomous shuttle from Local Motors and a Tesla have in common? Almost nothing. Both are battery electric vehicles; that’s about it. The Olli 2 is a 3D-printed low-speed shuttle customized to the geofenced environment it operates in. A Tesla can go anywhere the driver chooses at speeds up to OMG or higher. 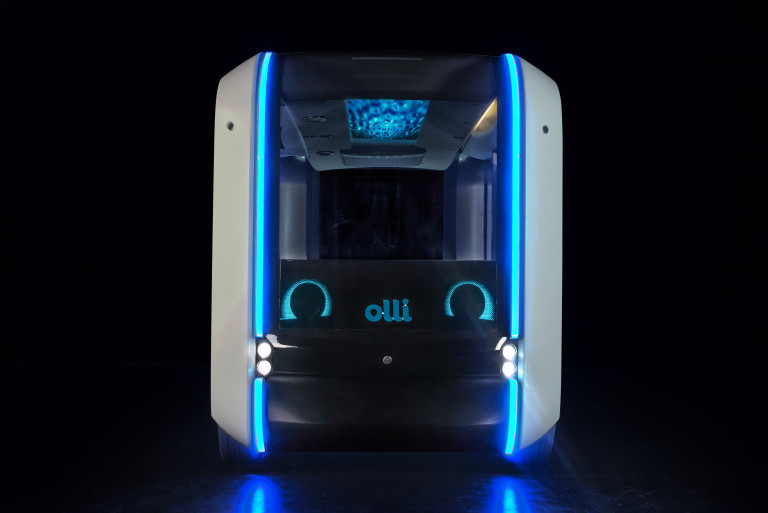 Olli is designed to provide shuttle service at colleges, universities, hospitals, military installations, and other campus-like environments. As long as it remains within the confines of the space it is configured for, it is capable of Level 4 autonomy and requires no human driver/attendant.

It first appeared at National Harbor, Maryland, which is a planned mixed-use development a few miles south of Washington, D.C.. Since then, it has been placed into service at Sacramento State in California and the State University of New York at Buffalo. It is in use at Joint Base Myer – Henderson Hall, a US military installation near Arlington, Virginia, and was introduced recently in Rancho Cordova, near Sacramento, California. Ollis are also servicing routes in Adelaide, Akron, and Seoul.

Local Motors co-founder and CEO John B. Rogers, Jr. said recently, “The future is here; it’s just not evenly distributed. That’s something I say a lot. Because people often ask me, ‘Hey, when will I see this vehicle? 2023? What do you think?’ My response: It’s here now, it’s just not everywhere.”

“The public isn’t going to see New York City with autonomous vehicles running around all the time (any time soon),” Rogers said. Campuses, on the other hand, are a sweet spot for companies like Local Motors that want to deploy now. These are places where mobility is needed and people are able to get up close and personal with a “friendly robot” like Olli, Rogers added.

Local Motors is not like any other vehicle manufacturer, and the fact that its vehicles are 3D-printed is just the beginning of what sets it apart. According to TechCrunch, parent company Local Motors Industries manages a digital design community of tens of thousands of engineers and designers that co-creates products for customers. Some of those mobility creations go to Local Motors, which uses its low volume 3D-printing micro-factories to build Olli and Olli 2.0, as well as other products.

Rogers says the ability to tap into its community and its partnerships with research labs, combined with direct digital manufacturing at its micro-factories, is what allows it to go from design to mobile prototype in weeks, not months or even years.

The company issues challenges to the community and the winner gets a cash prize and royalties as the product is commercialized. In 2016, a Bogota, Colombia man named Edgar Sarmiento won the Local Motors challenge to design an urban public transportation system. His design eventually became the original Olli.

Local Motors partners with a wide variety of other companies and automotive suppliers. Its 3D-printing technology comes from Oak Ridge National Laboratory. The Olli shuttle uses technology from leaders in the sensor, AV, and supplier communities.

Start-up Affectiva provides Olli’s cognition system, which tracks the facial expressions and mood of its passengers and provides dynamic route optimization. Velodyne, Delphi, Robotic Research, and Axis Communications handle the self-driving guidance system. Nvidia and Sierra Wireless provide much of the Human Machine Interface. Other companies that supply bits and pieces for Olli include Bosch, Goodyear, Protean, and Eastman.

Now the company is ready to introduce Olli 2. Although it is much like the original in appearance, it incorporates many updates based on lessons learned from the the first Olli autonomous shuttles. At 100 miles, it has longer range, and features in-wheel motors rather than electric motors that drive the wheels via axles.

While the first and second generation shuttles look nearly the same (Olli 2 has two more seats), digitally they are quite different. Where Olli 2.0 stands out is its improved user interface and more choices for customers looking to customize the shuttle to suit specific needs. As Rogers recently put it, “We can pretty much make anything they ask for with the right partners.”

For instance, the interior can be reconfigured for medical facilities that may want to be able to transport people in gurneys or wheel chairs. It’s this kind of customization that Rogers believes will give Local Motors an edge over autonomous shuttle competitors.

Outside, Olli 2.0 is equipped with a PA system and screens on the front and back that allow it to communicate with pedestrians. The screen in the front can display a graphic that looks like eyes, which helps make Olli 2.0 more approachable and anthropomorphic.

Inside the shuttle, riders will find better speakers, microphones, and touchscreens. Local Motors has an open API, which allows for an endless number of UI interfaces. For instance, LG is customizing media content for Olli based on the “5G future,” according to Rogers, who said he couldn’t provide more details just yet. Local  Motors has two micro-factories — one at its headquarters in Chandler, Arizona and another in Knoxville, Tennessee. Each is only 10,000 square feet in size. It began producing the Olli 2 shuttle in July and expects the first deliveries to take place in the fourth quarter of this year.

John Rogers hints that three new deployments for the self-driving shuttles are coming in the next few weeks but is not sharing details about them at this time. Production of Olli 1.0 will phase out in the coming months as customer orders are completed. Olli 2 will soon be available in Europe, where a third micro-factory is planned. For more about how Olli 2 is manufactured and utilized, check out the video below. States and companies can voluntarily submit information about automated vehicles and testing to NHTSA.